Accessibility links
Michael Jackson's Posthumous Sales Estimated At $1 Billion On the one-year anniversary of Michael Jackson's death, the pop icon's estate is rolling in cash. Jackson has joined the ranks of celebrities who earn more in death than they did while alive. 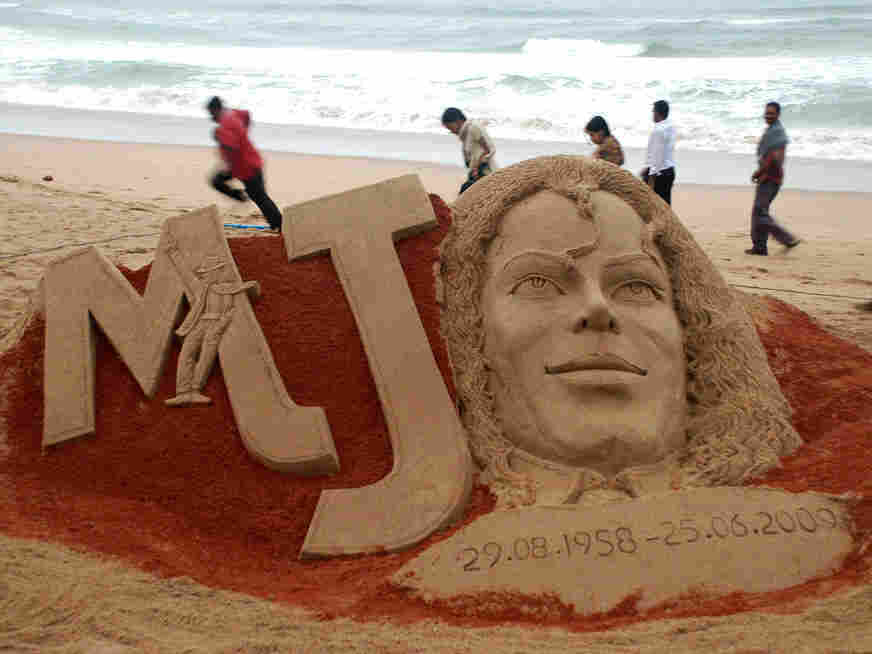 People walk past a sand sculpture of Michael Jackson created to mark the first anniversary of his death, at the Bay of Bengal coast in India. AP hide caption 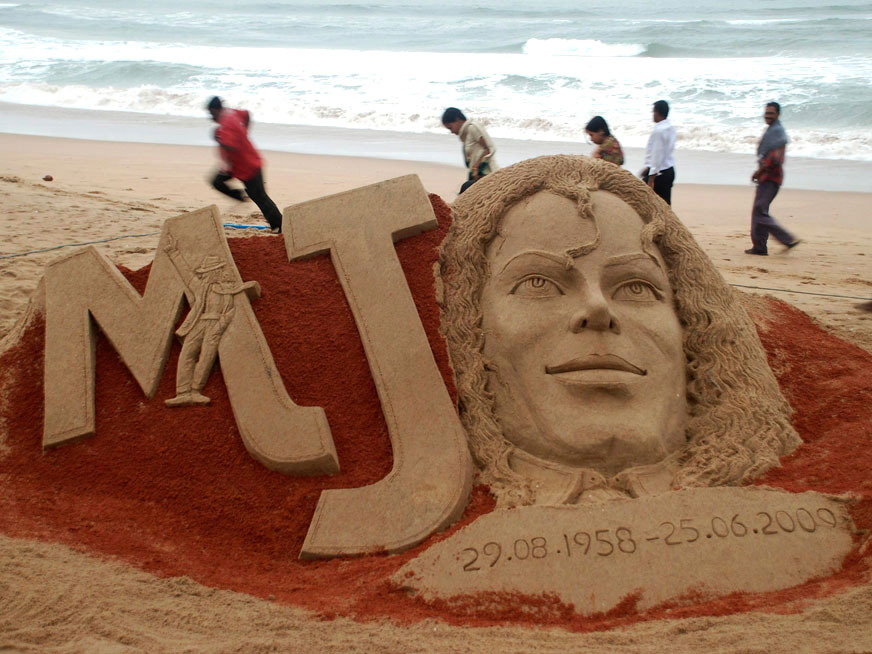 People walk past a sand sculpture of Michael Jackson created to mark the first anniversary of his death, at the Bay of Bengal coast in India.

If you walked into Hollywood's Amoeba Music in early June last year and asked for the Michael Jackson section, someone would have pointed you to a small selection of Jackson music that was dwarfed by Amoeba's hipper inventory: world music, hip-hop, jazz. It wasn't quite like asking for Barry Manilow, but almost.

Then Jackson died on June 25, and within an hour of the news rocketing around Los Angeles, things changed: "We put everything out, and every single copy of everything good just sold within the hour," says Daniel Tures, Amoeba's manager.

Jackson In The Top 5

Even the repackaged Jackson stuff that had languished on the shelves just vanished.

"It's cynical to say it, but death can be a very good career move," says Steve Pond, who writes for The Wrap.com, an online daily that reports on the entertainment industry.

Pond noted that several sources have estimated Jackson's posthumous sales to be in the neighborhood of $1 billion.

It's a comeback that has restored Jackson to the powerful peak he enjoyed in the '80s, when albums like Off The Wall and Thriller revived the flagging music industry — and made consumers far less resistant to making the transition to the compact disc. Jackson's death means there will be a finite number of offerings, Pond says, but last year has shown it won't stop sales.

"Right now, I think there are more re-packagings of Michael Jackson's music than there are original albums. For every album that's out there, there's at least one that puts the same old hits in a different order and puts a new cover on it," he says.

And people continue to buy them — cheerfully.

The big difference between Jackson now and Jackson a year or so ago — besides the obvious — is he's making money, but his outlay has changed dramatically.

INTERACTIVE: A Year After The Death Of A Legend
AP

Bill Werde, editor of Billboard Magazine, says Jackson's death was shocking and tragic — and fans' interest in everything Jackson resulted in the strange benefit of digging the singer out of a deep financial hole.

"Not only does it spur an incredible interest in that artist, which of course drives sales and other revenue opportunities, but it also removes the spending from the estate in a big way," Werde says.

So the money made from Jackson's music, music catalog and the release of the hit documentary This Is It, which chronicled the King of Pop's last rehearsal, isn't eroded by a large retinue and undisciplined spending habits.

A Model In Elvis

It worked great for Elvis: Thanks to his widow, Priscilla, fans can tour a restored Graceland and buy anything from commemorative figurines to Elvis wine glasses to a woman's charm bracelet featuring more than 30 tiny Elvises. (They range from the panther grace of Jailhouse Rock Elvis to the zaftig, cape-wearing guy standup comedians love to imitate.) He's the gift that keeps on giving.

"Never underestimate the ingenuity of somebody who's trying to make money off an artist who's not around anymore," Pond says, "but if there's money to be made, somebody's going to suggest it."

Bill Werde is guessing that the Jackson estate will choose from among the offers carefully.

"These licensing deals are pure cash deals, and they do quite well for estates," he says.

Even if the estate doesn't pick up every deal, Werde says, there's still going to be a lot of income rolling in for years to come. Jackson's children — Prince, Paris and Blanket — won't need to worry about how they'll pay for college.

So Jackson is making a great living even though he's no longer alive. Kinda reminds you of the refrain from one of his Off The Wall hits: "Got me workin', workin' day and night."