Accessibility links
A Mix For America It's the finest time of the year to sit at your computer streaming a whole bunch of music that sings the praises of our great land.

A Mix For America

A Mix For America 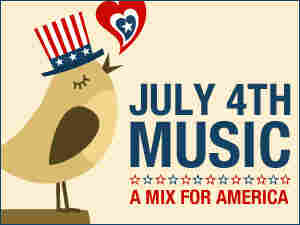 Listen to this mix on Spotify and Rdio.

Whether you're a constitutional scholar, someone who yells "USA! USA! USA!" at sporting events, or both, you'll agree that America — the country, not the soft-rock band behind "A Horse With No Name" — is worth at least one day off a year. From representative democracy and free speech to the ingenuity that gave the world deep-fried cheese and Slankets, America deserves a continuous music mix extolling her virtues.

As Flag Day gives way to July 4 festivities, it's the finest time of the year to hoist a flag, ignite some shoddily manufactured fireworks (imported, of course) and sit at your computer while streaming a whole bunch of music that sings the praises of our great land.

"Help Save The Youth Of America," Billy Bragg, Must I Paint You A Picture? [The Current]

"Hoe Down," Oliver Nelson, The Blues And The Abstract Truth [Jazz24]

"Land Of The Freak," King Khan And The Shrines, The Supreme Genius Of... [The Current]

"On The Trail," Itzhak Perlman/Oscar Peterson Side By Side [Jazz24]

"This Land Is Your Land," Sharon Jones And The Dap Kings, 89.3 In Studio Performance. [The Current]

"One Nation Under A Groove," Funkadelic, The Whole Funk And Nothing But The Funk [The Current]