Accessibility links
'Mad About You' And The Memory Of The Perfect Relationship Sitcom The fourth season of 'Mad About You' reaches DVD, and our commentator compares it to his memories of a perfect relationship sitcom.

'Mad About You' And The Memory Of The Perfect Relationship Sitcom

'Mad About You' And The Memory Of The Perfect Relationship Sitcom 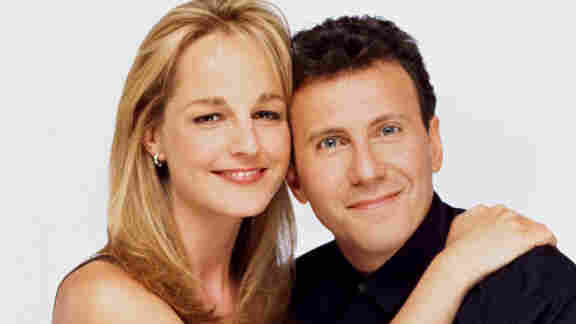 The fourth season of Mad About You (featuring Helen Hunt and Paul Reiser) was released on DVD yesterday, and it's got us thinking about making the perfect relationship sitcom. Shout! Factory hide caption

There was a time, long ago, when I swore to a friend that Mad About You was the perfect relationship sitcom. Not the single best or the single funniest, just a perfect specimen. I can't remember why that was, precisely, except for one thing that seems pretty important in retrospect: it made me laugh, and consistently. That's usually enough.

The fourth season came out on DVD yesterday, but it's been more than three years since the release of Season 3, which leads me to believe that somebody somewhere stopped caring about the show right about this point. That strikes me as odd, because that time long ago when I claimed Mad About You was perfect? Was Season 4. That was the moment.

The quality of the show would get wobbly in about a year; once baby Mabel became a concrete entity, rather than a vague idea that existed as a single possibility among many in some nebulous future, the tone turned brittle and, worse, the focus shifted exclusively and irrevocably from the couple to the child. In short, it became a different show.

But that just makes Season 4 all the more worth treasuring, the last sustained run of episodes about Paul and Jamie purely as a married couple. It's easy to forget now (and was easy to take for granted back then) what excellent chemistry Paul Reiser and Helen Hunt had together, which shines through in the smallest interactions between them. They play. They bicker. They plot. They have fun. More than anything, as both characters and actors, they're a team.

And that holds true for the season finale, a two-part episode that features one of the most genuinely heartwrenching sustained arguments I've ever seen on television, and certainly within the confines of a sitcom. Awful things are said, exasperated comments are misconstrued, mundane tangents quietly introduced and then dropped, and still they keep on. Paul and Jamie occasionally raise their voices, but most of the time, they're just desperate and frustrated that there are no simple sitcom answers available.

They are, in fact, even fighting as a team, both of them more or less on the same side as they try to figure out what went wrong and how to fix it. That fix both comes out of nowhere and rings remarkably true. And then the season ends on a quick but overpowering moment of joy that has stuck with me for 15 years.

What was interesting about revisiting these episodes after a decade and a half was realizing that about 99 percent of everything that I remember and love about the show is contained in this season. That includes characters, like Hank Azaria's Nat the dog walker and Alan Ruck's Lance Brockwell. Plotlines, such as Paul's ill-fated nature documentary Weed (about a weed). Individual, almost microscopic-level jokes, like Cousin Ira grabbing a fake name from his pen and insisting that he was Ira Unibal (and Portuguese). I even remember correctly predicting an old woman's third appearance in a scene in episode 20 (“The Weed”) not long after reading a book on comedy that introduced me to the rule of threes.

Unfortunately, there's also a lot that seems, for lack of a better word, sitcommy. The cute TV dog did plenty of Cute TV Dog Tricks. All of the medical professionals -- and there were several in this season where the Buchmans' struggle for conception was a running, though not all-encompassing, thread -- are overserious and judgemental (which seems odd, in that I would think that a humorless fertility doctor is in the wrong line of work). Pretty much everybody contains a degree of caricature.

Everybody, that is, except for Paul and Jamie. Hunt walked away with an armful of Emmys, at least some of which were well-deserved, but it's hard to look at how delicately attuned Reiser was to his TV wife and not think that he deserved them just as much. The two of them, together, were a marvel to witness. I once thought that Mad About You was the perfect relationship sitcom. Watching Season 4 again after all these years, I realized that the sitcom might not be perfect. But the relationship came awfully close.