Accessibility links
Minnesota Girl, Sri Lankan Guy Still Turn Heads Interracial marriages are still relatively rare in the U.S., but the number is growing. In Cleveland, one couple cherishes their differences while leaving the double takes to others.

This year, more than 2 million couples will get married in the United States. Our series, Newly Wed In America, takes a look at the way the institution of marriage has changed — sometimes radically — in the last 50 years.

Interracial marriages are still relatively rare in the U.S., but the number is growing. In 1970, just three years after the U.S. Supreme Court struck down laws across the country that prohibited interracial marriages, less than 2 percent of marriages in the United States were interracial. Today, that number is almost 6 percent. NPR's Katia Riddle brings us this profile of one interracial couple in Cleveland.

The first time Rochelle Wawracz saw her future husband, she was waiting tables in a restaurant in Minneapolis. 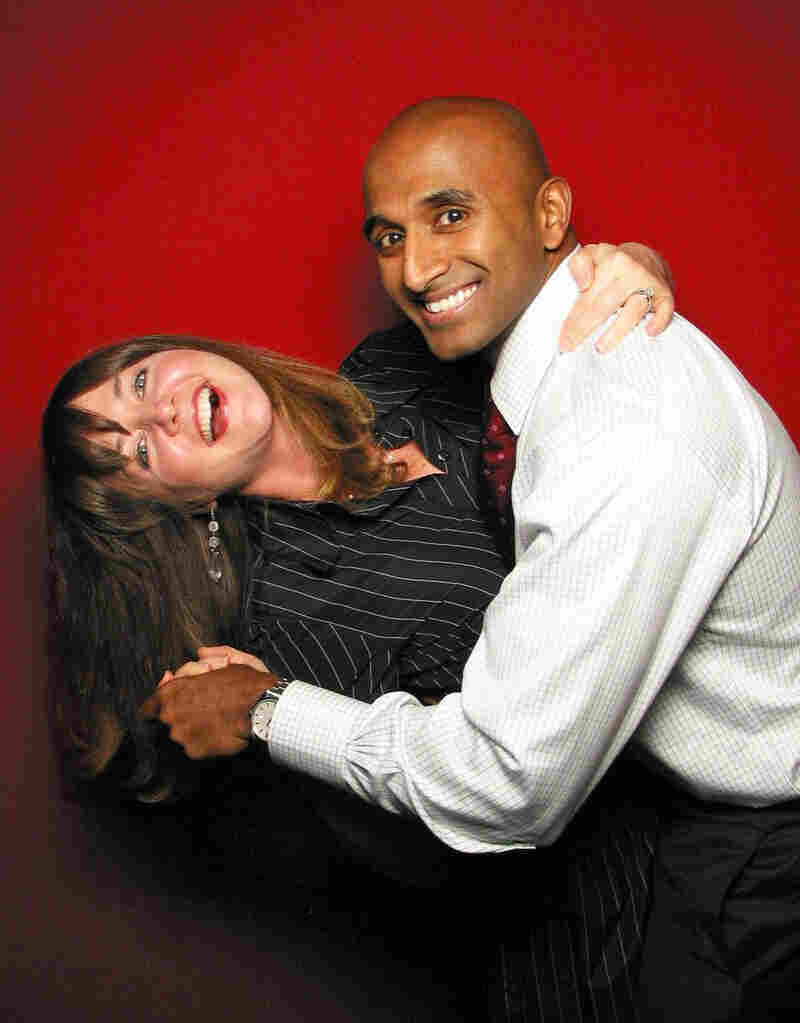 Rochelle and Varnesh Sritharan met at a restaurant where she was working as a waitress. Rochelle said she knew Varnesh was "the one" within two months of meeting him. Courtesy of the Sritharans hide caption

toggle caption
Courtesy of the Sritharans

"I noticed him immediately," she says. "He was not sitting in my section. But I went and filled up his soda because I couldn't take my eyes off of him. And I just, I remember walking back to the waitress station and saying, 'That man is so beautiful.' "

With her Scandinavian roots, Wawracz is a quintessential Minnesotan. She figured the guy was from another country, and she'd probably never see him again. Varnesh Sritharan is from Sri Lanka, but he was living in Minneapolis at the time, working at a law firm downtown. He came in that day with some co-workers.

"Initially we went there for the burgers," he recalls. "After Rochelle started being our server, we decided to go there probably two, three times a week to see if we could run into her."

After Sritharan asked her out, Wawracz says she knew within the first two months that he was the one. They were married in a traditional Sri Lankan ceremony in the Twin Cities.

Fast-forward eight years. Now they live in Cleveland and have a 1-year-old son, Kai. On this day, Wawracz feeds Kai an early dinner. She and Sritharan are a striking couple — the contrast between his dark skin and her pale complexion is dramatic. The couple says the difference doesn't go unnoticed.

"I pick up on little, like, glances that linger a little longer than they should," Sritharan says. "Go to the grocery store — there's still a lot of weird looks and things like that. But, I guess ultimately, you just have to learn to roll with it, because you're not going to escape it."

Wawracz grew up in a family of "hippies," as she says, and her parents encouraged diversity. But she says this attitude isn't necessarily typical in small-town Minnesota, where she spent a good part of her childhood.

Got A Wacky Wedding Photo?

We want to hear from you. Show us your photo and write a caption that tells the story in 100 words or fewer.

Here's How: Upload your photo to Flickr, tag it as "nprweddings" and put your story in the caption field. We’ll be watching -- and we'll post our favorites right here at NPR.org.

"I still haven't brought Varnesh back to my high-school town. It was all white people," she says. "I think about, you know, people will look at us funny."

Sritharan moved to the U.S. in 1983. His parents raised him and his brother in New Jersey in a tight Sri Lankan community.

"When I went away to college, I think, over and over, they professed their overwhelming preference to have me marry someone who was Sri Lankan."

Sociologists say one reason for the rise in interracial unions is that Americans are getting married much later than they did 30 years ago. Sritharan was 31 when he and Wawracz wed. His father died last year. His mom, Saro Sritharan, who is visiting, says she can hardly remember wishing for a Sri Lankan daughter-in-law.

"Rochelle is a nice girl, and I'm sure Varnesh made the right choice," she says. "I'm very happy." 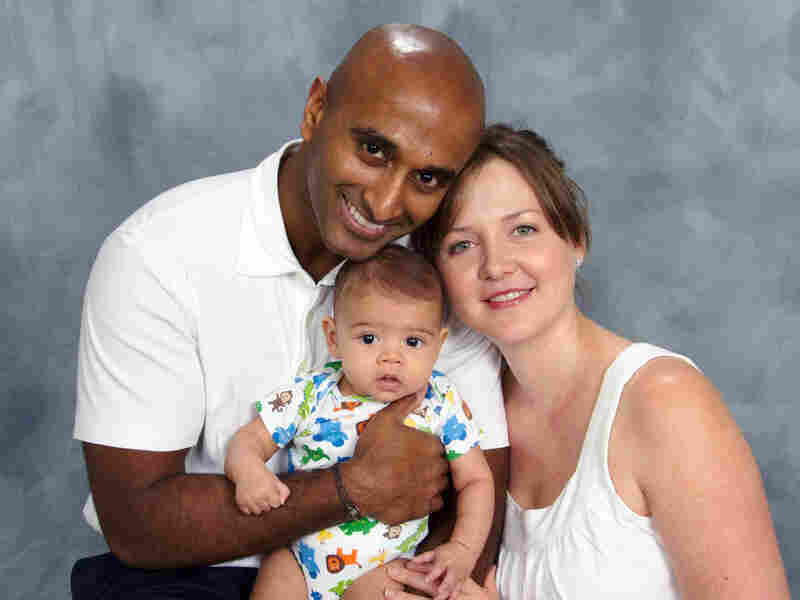 toggle caption
Courtesy of the Sritharans 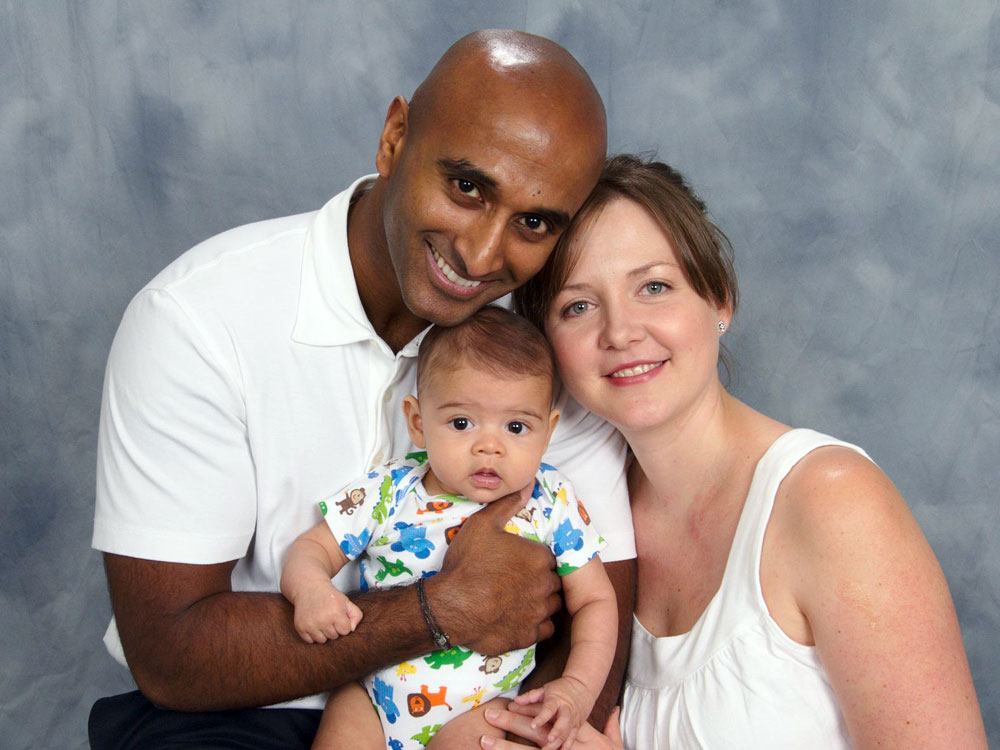 The Sritharans with their son, Kai.

During the visit, the family takes Kai to the Hindu temple. At Saro Sritharan's request, the priest performs a short, special ceremony, blessing Kai.

This is only the second time Wawracz has gone with Sritharan to temple. She says sometimes she gets nervous being the only white person in this situation. But she also recognizes that Sritharan's faith gives him strength.

"I think that maybe people think that because I married her, I must be somehow removed from my culture," says Sritharan. "Or that I'm not as devout a Hindu. Would it be easier if she was a Hindu? Yeah, but then I wouldn't have her."

Sritharan says it doesn't matter whether Wawracz shares his faith; she brings him balance between being a lawyer, father, an immigrant and a husband.