Accessibility links
Why The Next Big Pop-Culture Wave After Cupcakes Might Be Libraries Humor us here for a second: Does it seem to anyone else like libraries are poised for their moment of pop-cultural ubiquity? 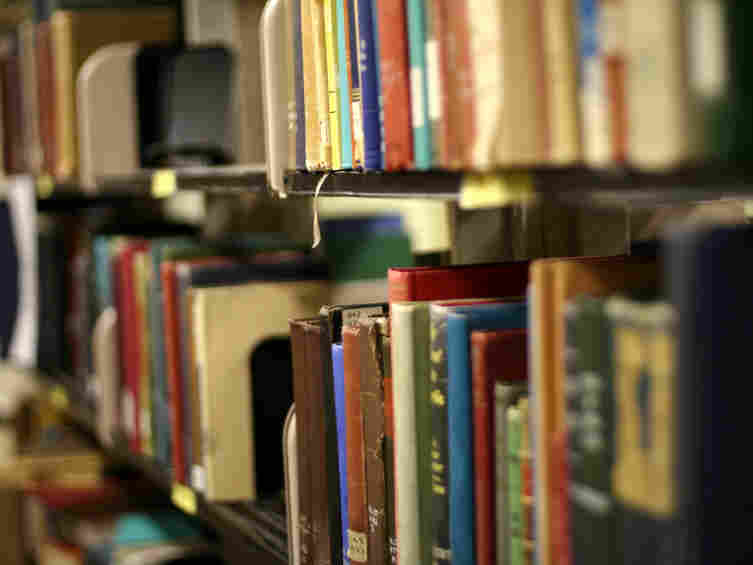 I realize we're picking the bones from the Old Spice campaign at this point, but when I saw that the Brigham Young University parody of the Old Spice ads had gotten more than 1.2 million views (Old Spicy himself -- that's what I'm calling him -- did a video for libraries), it got me thinking.

Specifically, it got me thinking about the very enjoyable Librarians Do Gaga video that everyone sent my way after the debut of the NPR Does Gaga video.

And about the fact that a local news story skeptically questioning whether libraries are "necessary" set off a response from Vanity Fair, and a later counterpunch by Chicago's Public Library Commissioner won her support from such diverse, non-library-specific outlets as The A.V. Club and Metafilter, and from as far away as The Guardian.

Call it a hunch, but it seems to me that the thing is in the air that happens right before something -- families with a million kids, cupcakes, wedding coordinators -- suddenly becomes the thing everyone wants to do happy-fuzzy pop-culture stories about. Why?

Libraries get in fights. Everybody likes a scrapper, and between the funding battles they're often found fighting and the body-checking involved in their periodic struggles over sharing information, there's a certain ... pleasantly plucky quality to the current perception of libraries and librarians. Yes, it plays a little ironically against the hyper-stereotypical buttoned-up notion of what a librarian is, but the sense that they're okay with getting mad in public -- like Chicago's Public Library Commissioner did -- gives library people a spark they might not otherwise have.

Librarians know stuff. You know how the words "geek" and "nerd" have gone from actual insults to words used to lovingly describe enthusiasts? Well, if we haven't gotten past venerating people who don't know anything, we've certainly reduced, I'd argue, the degree to which we stigmatize people for knowing a lot. This alone might not make libraries cool, but it takes away from the sense that they're actively not cool. More specifically, they live in the world of information, and are employed in part to organize and make accessible large quantities of data. If your computer had feet and a spiffy personality, you see.

Libraries are green and local. This is where there's a lot of potential appeal for the same people who like organic produce and reusable grocery bags. You can pretty easily position a library as environmentally friendly (your accumulation of books and magazines you are not reading is fewer trees for the rest of us, you know), not to mention economical (obvious) and part of your local culture. This is the part of the potential appeal that's anti-chain-store, anti-sprawl, anti-anonymity, and so forth.

"Open to the public" means "some days, you really have to wonder about people." This is where you get the spark of an idea for TLC or somebody to do some goofball show called The Stacks, which follows a small local library through funding problems, trying to get book clubs started, whatever. When your building is open to the public, that means open ... to ... the ... public. And you know what's a little unpredictable? The public. This is where you might get your drama. (When I was in college, the information desk used to post the best questions it received, one of which was "How long do you cook spaghetti?" I suspect many libraries have similar stories.)

There seems to be a preposterous level of goodwill. Quite honestly, I feel like you can go on YouTube and act like a complete goof (in the best way), and if it's for libraries, people have that same rush of warmth that they used to get about people who had sextuplets, before ... well, you know. Before.

I don't know whether it's going to come in the form of a more successful movie franchise about librarians than that TV thing Noah Wyle does, or a basic-cable drama about a crime-fighting librarian (kinda like the one in the comic Rex Libris), or that reality show I was speculating about, but mark my words, once you've got Old Spicy on your side and you can sell a couple of YouTube parodies in a couple of months, you're standing on the edge of your pop-culture moment. Librarians: prepare.