Accessibility links
A Fan's Notes: Being A Non-Spoilery Nonreview Of The 'Scott Pilgrim' Movie In which our comics blogger, who worried about how the Scott Pilgrim books would translate to screen, breathes a sigh of relief.

A Fan's Notes: Being A Non-Spoilery Nonreview Of The 'Scott Pilgrim' Movie

A Fan's Notes: Being A Non-Spoilery Nonreview Of The 'Scott Pilgrim' Movie 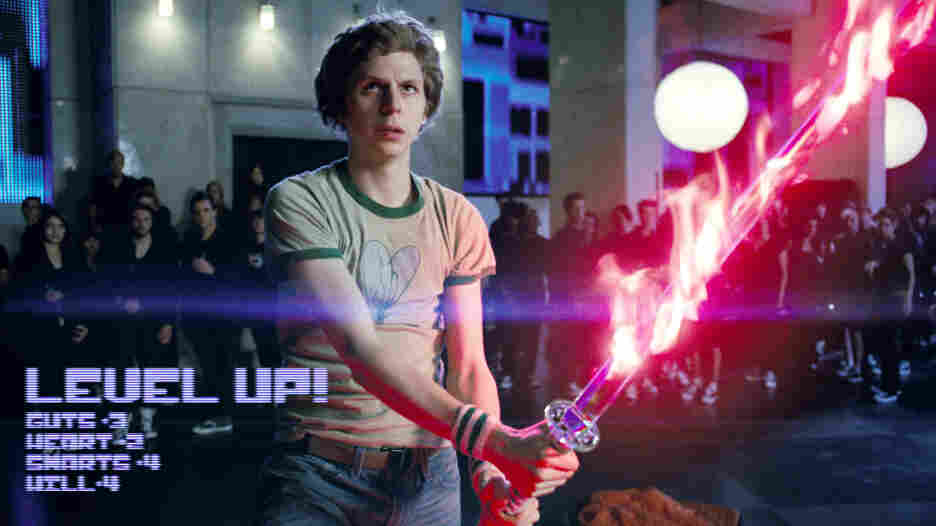 Boost: Michael Cera's Scott Pilgrim may be a touch more tentative than he is in the comics — but when he's called on to combat his new girlfriend's Seven Evil Exes, Cera proves he's got the right kick-ass stuff. Double Negative/Universal Pictures hide caption

… unless, in your mind, “IT’S PRETTY GREAT! YOW!” counts as either a spoiler or a review. Or both at once. In which case: Oops. Because no kidding, it’s pretty great. Also, Yow.

The film Scott Pilgrim vs. The World, based on the series of graphic novels by Bryan Lee O’Malley, comes out Aug. 13.  We’ve talked before, you and I, about the arrant grooviness of the books, and the way that first trailer inspired an anticipatory thrill that manifested as a poetasterrible Wallace Stevens riff.

Last week, an advance screening at Comic-Con earned fervent fan love.  No surprise there: If you’ve got a comic-themed film to flog, Comic-Con attendees are to the San Diego Convention Center as fish are to barrels.

Press screenings have started up, too, and last night I attended one on the arm of an erudite arts journalist who once tried to talk to me about an opera he’d just seen. Until my expression of mingled dread, alarm and incomprehension reduced him to an embarrassed, merciful silence.

There's an embargo to be honored, so I’ll keep this vague. I’ll also keep it limited to my perspective as a fan of the books -- more specifically, as the kind of fan I was before the lights went down last night: a worried one.

What I feared would be lost in Scott Pilgrim's transition to the screen is the very thing that defines the graphic novels: their charm. Because I didn’t simply enjoy these books. They completely won me over.

O’Malley’s sharp dialogue, his clever use of indie music and video game imagery to delineate character -- yes, they’re part of that charm. But the thing that makes the series so distinctive is its art: O’Malley’s manga-inflected cartooning is goofy and fun and disarming and, I’m pretty sure, cures scurvy.

Which is centrally important, because our main character runs at only two speeds: 1. clueless and 2. thoughtless, neither or which necessarily endears him to us. No, it’s the art that does that work -- inviting and ultimately beguiling the eye, the brain and the heart, reaching our deepest, childlike pleasure centers the way only cartoons can.

I worried that for the movie, director Edgar Wright would concentrate on the book’s music/video game references and other po-mo trappings, expecting them to do the heavy lifting. Don’t get me wrong -- these gags are some of my favorite parts of the books and the film, and they’ll surely be what you and your friends talk about on the way home, but they don’t make us like Scott anymore.

I needn’t have worried. Like Spaced, the British television series Wright co-created, Scott Pilgrim vs. The World enthusiastically embraces the tools (and especially the camera setups) of a familiar genre. But the film depends upon its actors to flesh out the story, and the stakes.

Michael Cera’s casting was greeted in some circles with surprise. To many (OK, fine: to me), his delicate, stammery presence didn’t jibe with the heedless and willful Scott of the books.  And to be blunt, this performance doesn’t move Cera the actor outside of his comfort zone too often.

But it does make him a Scott Pilgrim you care about.  In place of the books’ cartoony saucer eyes and Cheshire cat grin, we get a Scott who’s slightly frail, even occasionally plaintive -- which just makes his freewheeling, kinetic deftness at butt-kicking all the more satisfying.

All that said? I’m still worried.

Not that the movie won’t deliver what fans of the books are looking for; it does that, and more.

I’m worried that the rest of the world won’t know quite to make of this. Quick cuts, gags that revolve around one’s familiarity with 8-bit video game conventions, fight scenes that, despite their (considerable!) merits, are both long and frequent?  How will non-comics fans react to a movie that wears its angling-for-cult-movie status as a badge of honor?

“I found it rather enjoyable,” he said, because he talks like that.