Accessibility links
War Games Lure Recruits For The Real Thing A controversial Army Experience Center in a Philadelphia shopping mall will soon close its doors after a two-year pilot program. With regard to its military outreach efforts, the multimillion-dollar facility has declared "mission accomplished," but critics question the Army's version of reality. 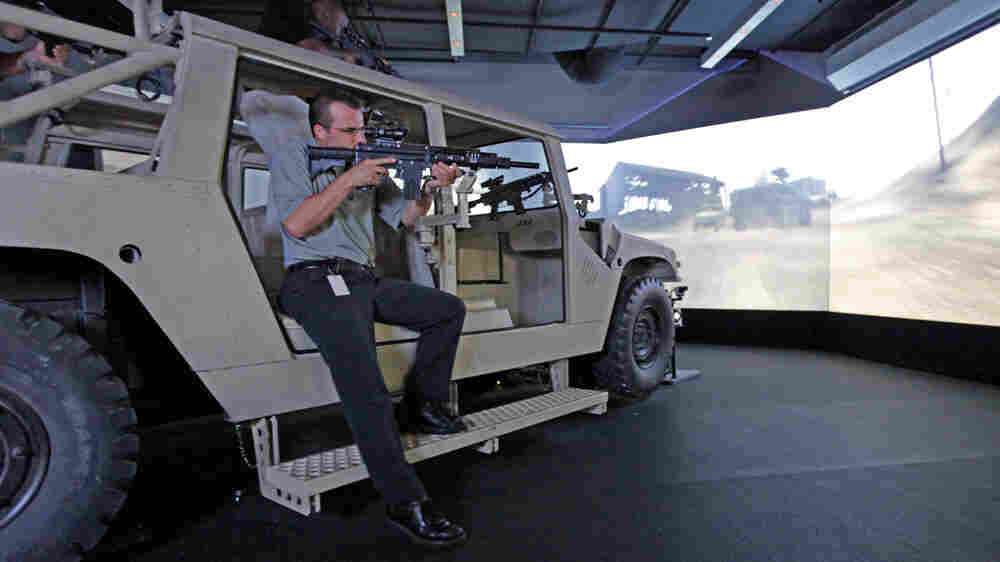 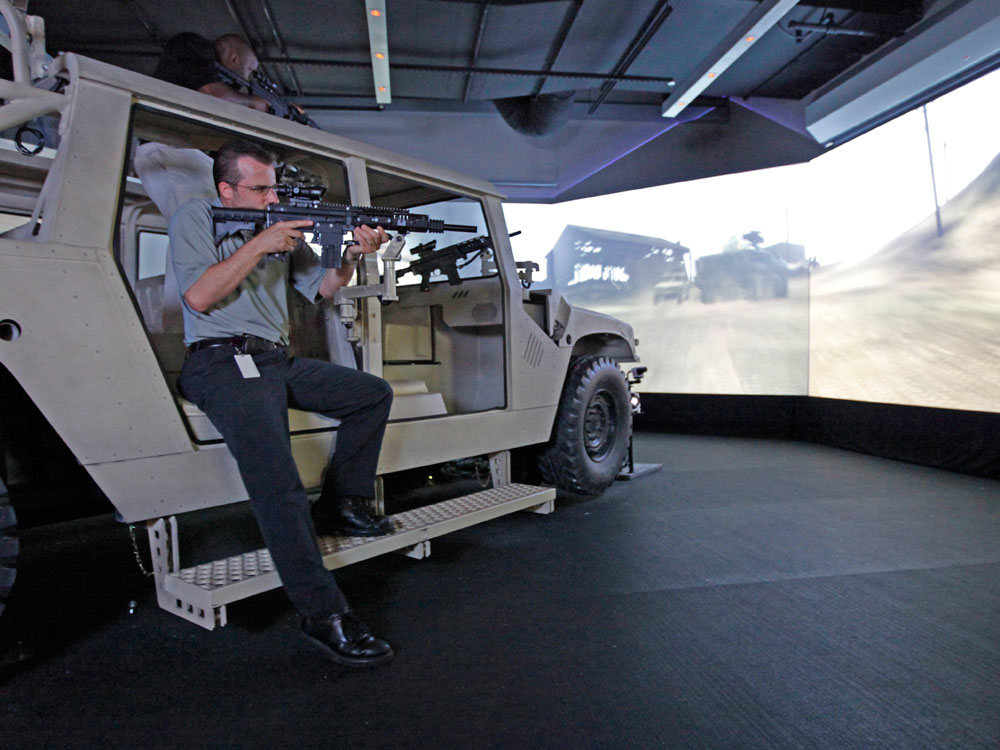 Staff members at the Army Experience Center in Philadelphia demonstrate the Humvee interactive simulator in 2009.

A controversial Army Experience Center in a northeast Philadelphia shopping mall will soon close its doors after a two-year pilot program. With regard to its military outreach efforts, the multimillion-dollar facility has declared "mission accomplished," but opponents question the Army's version of reality.

At the center, teenage boys sit in a row of Army-green recliners facing flat-screen monitors. They square off in video war games like the popular Call of Duty 4: Modern Warfare. Once visitors register and prove they're 13 years or older, they're given free access to the facility's array of war-themed games.

Army Experience Center spokesman Capt. John Kirchgessner says the center has proved more effective than traditional recruiting methods. Using technology to create a relationship with the public "is a much better way to share our Army story than to simply smile and dial and ask someone if they thought about joining lately," he says.

The facility also houses three simulators: Apache and Blackhawk helicopters plus an armored combat Humvee. John Gallato, 18, and three of his 15-year-old friends sit atop the Army vehicle eagerly waiting for their mission to begin. With a lifelike machine gun in hand, Gallato says experiences like this will help prepare him for the future.

"I'm going to be killing people," he says. "I'm actually joining the Marines and will be doing this in real life."

When they get the green light, the four teens begin maneuvering through virtual war zones and shooting at targets while dodging bullets themselves. 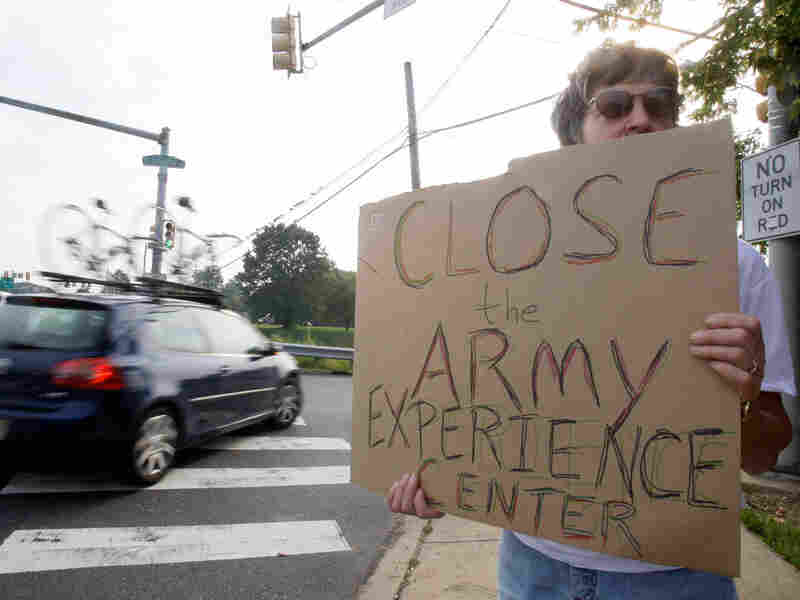 Demonstrators have voiced opposition to the Army Experience Center in Philadelphia throughout the two years the pilot program has been operating. Matt Slocum/AP hide caption 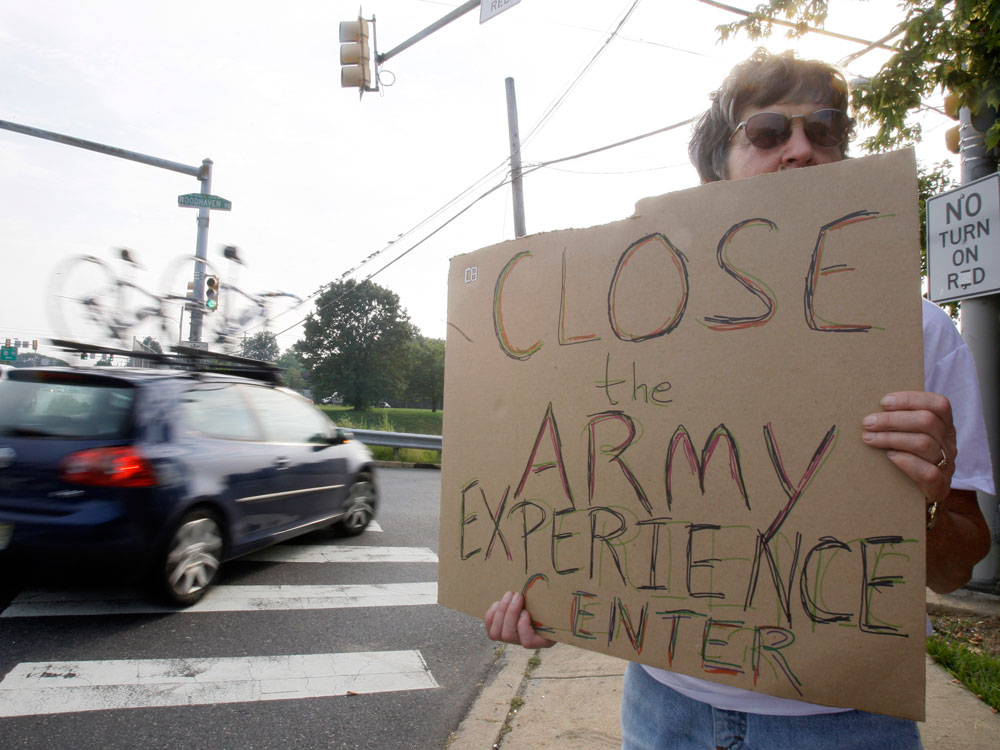 Demonstrators have voiced opposition to the Army Experience Center in Philadelphia throughout the two years the pilot program has been operating.

"The heat, people screaming, blood, flies, horrible smells, smoke in your eyes stinging, sand — the list goes on and on — and they've taken all of that out," he says. "What they've effectively left is what they consider to be the 'fun' part."

Kirchgessner denies the center portrays war as a game and says recruits are well aware of the dangers of combat.

"If you were to ask any one of them, 'Do you feel as though the Army is going to be like playing with a controller or game?' they're going to smile and say, 'Absolutely not,' " Kirchgessner says. It's crazy to even think that."

Five nearby recruiting offices were closed when the Philadelphia center opened in 2008. Since then, an estimated 240 recruits have enlisted at the Army Experience Center. While overall recruitment rates in the area have stayed the same, Kirchgessner says the facility reached that number with half the staff.

This fall, two new Army Opportunity Centers will open in the Philadelphia region, downscaled versions of the Experience Center.