Accessibility links
Review: Thou, 'Summit' Whether it's sludge and Black Sabbath-ian doom or bluesy hardcore and drawled black metal, Thou's third full-length, Summit, realizes all those elements, smoked in ash and seared in discontent. 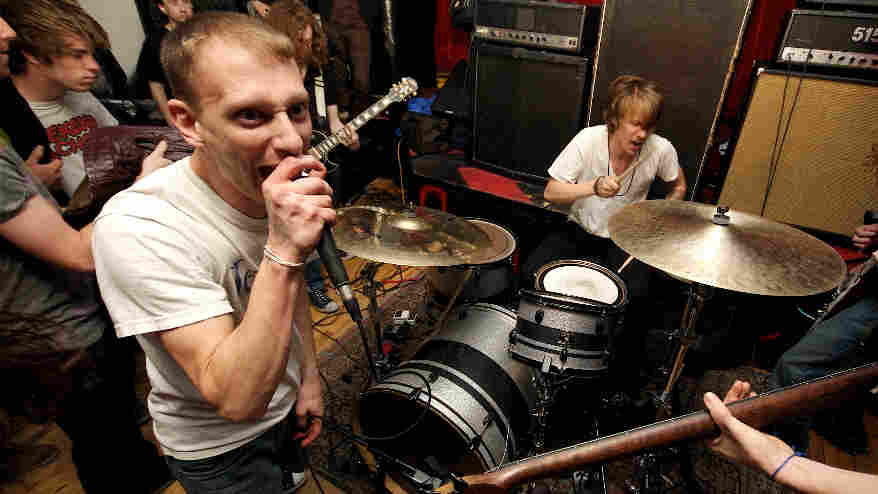 Stuffed into an airless coffee shop, our humid summer bodies lubricated, we raised our fists high as we pulsed back and forth. After minutes of feedback drone heightened the tension, Thou's lurching downbeat was our sweet release. For ten minutes, we were fully Thou's. When the cops came two songs later to shut down the show, we cried for the band's signature "Smoke Pigs." They obliged. It was the most intense three-song set I'd ever seen.

Over the course of two full albums and several split vinyl releases, the Baton Rouge metal band has stretched its sonics far and wide. Those EPs and singles, in particular, show a band working through its possibilities — from mud-drawn sludge and Black Sabbath-ian doom to bluesy hardcore and drawled black metal. Summit, Thou's third album-length effort, is a realization of those elements, smoked in ash and seared in discontent, and you can hear it here in its entirety until its release on Aug. 10.

Uncharacteristically, for a band closely tied to the slow, heavy-riffed nature of doom metal, Summit begins with swarming blast beats after 30 seconds of lonely, guitar arpeggio. It's a bold statement that threatens disaster, but then something unexpected happens — there's resolve. That release felt in the sweaty coffee shop has made its way onto record as a sudden lurch into melodic decay. And with vocals like dragging a corpse through a briar patch, Bryan Funck is the scream amidst the droning darkness.

Throughout Summit, Thou commits moments like this: raw, ugly portraits of humanity set against strangely lush backgrounds. It's what makes the Beckett-like final phrase of the album's epic "Prometheus" so poignant: "Everything has changed / Nothing has changed." The dichotomy works to the band's favor as a funereal trombone and violin underscore the gnarliest of riffs on "Prometheus" and make me salivate at the idea of Athens sludge heroes Harvey Milk displaced to swampy Louisiana.

What's most exciting, however, is that it seems like Thou is just beginning. Yes, the band works out its demons through countless releases, but in my rabid record collecting, Thou keeps getting better. It's a vision that grows outward, but always deliberate. Strains of acoustic instruments and cobbled-together choirs pepper the end of Summit, filled with melancholy and depth as heavy as anything else Thou has done. When the time comes for Thou to record a Southern black metal record with a ragtag brass band, we'll know it was coming, but we still won't be prepared.