Accessibility links
'We Call It The Human Zoo': An Uneasy Stroll Through The 'Big Brother' House Touring the house where the contestants on Big Brother showcases a massive production effort, a hugely claustrophobia-inducing camera setup, and some people who apparently didn't get the shyness gene.

'We Call It The Human Zoo': An Uneasy Stroll Through The 'Big Brother' House

'We Call It The Human Zoo': An Uneasy Stroll Through The 'Big Brother' House 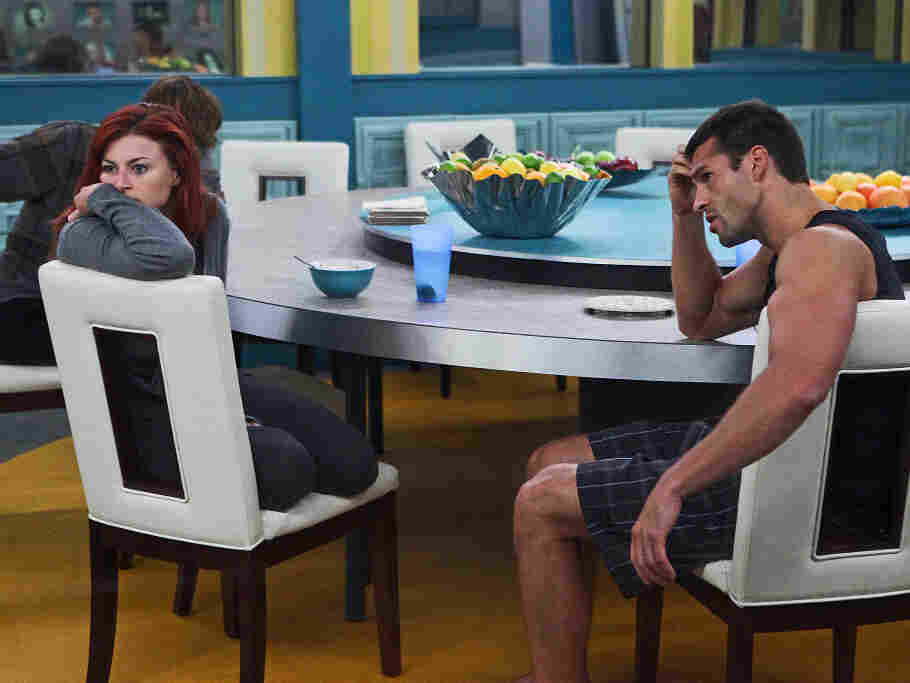 Rachel and Brendon are two of the ten people still stuck in the house on CBS's Big Brother. Monty Brinton/CBS hide caption

The house where Big Brother locks people up every summer is not a house, of course. It's a very big soundstage attached to a very small "yard" of matted plastic grass that bakes in the sun. The hot tub is almost despondently bare-bones, like the one you might find at a thirty-nine dollar motel where "HOT" and "TUB" are the biggest words on the sign you can see from the interstate.

I tour the house -- no, the stage -- no, the set, the great big set -- with a small group of ten critics or so. We're all wearing black, because if you wear white, you can show up like a ghost to the contestants on the other side of more than 100 two-way mirrors that are the all-seeing eyes of the operation. Wearing white lets them see you. You're only supposed to see them. Nobody talks to the contestants, ever, except producers, who invisibly boom and crackle over the PA system.

The crew -- it takes more than 200 people to make this show, we're told -- roams around behind the "camera ring" of one-way mirrors, filming contestants who are arguing, or in the shower, or having sex, or engaging in some kind of bizarre organized competition, or more likely lying around with nothing to do except think about the fact that at least someone's watching them. At least their fifteen minutes will last all summer.

Executive Producer Allison Grodner tells us that the producers call it "the human zoo." I try not to flinch.

We see that backyard first, while the contestants -- who do not, and will not, have any idea we're here -- are "locked down" inside the house. They're in there, so we're out here. The yard is so much smaller than it seems on TV. It's surrounded by walls. It's blazingly hot. The pool is a pool in name only -- the water is real, which is more than can be said for the grass, but it's only big enough for a little directionless splashing around in your bikini. Or maybe for bringing your body temperature down so you don't get heat stroke.

A giant camera arm throws a shadow as it swings across the little box of open sky.

We visit the control room, where something like 10 people stare at a giant bank of monitors. They're deciding which cameras to record, which stories to follow, where to go next. Two "loggers" record everything that happens, minute by minute, so everyone can find the right place on the tape later. There are loggers at four in the morning. There are loggers when everyone is sleeping. The zoo is on the record.

We walk a long, dark corridor where cameramen (in black, of course) are lined up filming the competition taking place in the yard. Now we're in here, and they're out there. We stand beside the cameras and peer out at the contestants who are squinting in the sun. Dark and cool in here, bright and hot out there. The urge to tap on the glass is almost overwhelming. But we couldn't feed the animals even if we wanted to.

We step into the house. This is our first trip to the other side of the glass, where we see mirrors instead of windows, and it's unnerving. A lot of windows are just a beautiful view. A lot of mirrors are induced claustrophobia. Everywhere you look, there is that startle moment, because you are staring back at yourself, and maybe someone on the other side is staring at you, too, but you'd never know. This, it occurs to me, accounts for at least some of the bizarre behavior these people exhibit; it's an uneasy feeling even when nobody is actually filming you, or watching you on the Internet, or seeing several shots of you on that bank of monitors. It's like strolling around the giraffe enclosure after closing time -- you might be behind the walls, but it doesn't make you a giraffe.

The biggest surprise about the house is how dirty it is. Thirteen people originally moved into this pretend house; ten still live here. They have very little to do with their time, and they still don't clean the bathroom. The show does not clean up after them. Cleanliness is what the show calls a "roommate issue." When we are there, there is a saucepan full of cold cooked rice on the stove, and a smaller pan of something floating in red liquid -- apricots? Potatoes? There is half-eaten fish on the counter.

They were just here. We're looking at their dirty dishes, we're taking note of the shocking number of towels strewn everywhere, and we're in their bedrooms, where their open suitcases spill out onto the floor. They generally live several people to a room, and it has about the appearance you'd expect from a place straddling the line between "hostel" and "flophouse." They're not thinking about the cameras anymore, it strikes me, because if they were, they'd at least clean the kitchen.

Really, they were just here. It's like they fled, or they were evacuated. I've seen that one guy on TV, and now these are his sneakers I am trying not to trip over while he's outside. He pushed each one off with the other foot, and he left them here by the bed, and now I'm here, and he's out there. He'll be back here in an hour. The urge exists to move something; to leave a sign.

But we're obedient. We don't move anything. They won't know two groups of ten people tromped through their rooms, saw their stuff, and tsked at how dirty their bathroom is.

We go upstairs to the Head Of Household room, the big room where someone wins the right to live every week. We know whose room this is right now -- it's Rachel's room, the one with the flame-red hair who's gotten entirely too involved in a comically intense romance in the house. On the table is a pair of handcuffs. Her stuff is pushing its way out of a duffel bag on the floor.

The zipper on the end compartment of her bag is open, and locks of flame-red hair are poking out.

I am momentarily overwhelmed with guilt. I am in her room. I am looking at her stuff. That is her underwear, and those are her hair extensions, and she's going to come back in here and not know that twenty people walked through while she was gone, or that I pointed at her hairpieces with my toe. I feel like a burglar.

But this is because I am thinking: How would I feel? It's the wrong question. She doesn't mind. If she minded people checking out her hair extensions, or seeing her put them in, take them out, tuck them away, or stuff them into her bag, she wouldn't be here. Cameras watched her put the extensions in the bag and leave the bag on the floor. Somewhere on the Internet, there may very well be a traceable chain of custody that could tell you where her hair extensions have been for the last week.

This is a No Privacy Zone. This is a Welcome, Here's My Stuff, Here Are My Handcuffs, Please Look At Me Zone.

"Human zoo"? Sure. If the zoo animals volunteered, signed a release, and were being paid to be there. In fact, you could change the name of Big Brother to The Human Zoo and you know what? They'd still come, because this is the game. Letting strangers poke through her stuff is what she's here for. I'm just facing her open suitcase in person, instead of on television.