Accessibility links
Biggie Smalls: The Voice That Influenced A Generation The rapper died when he was only 24 years old. He only released two albums, yet he's one of the most revered, emulated and biggest-selling rappers in the game. 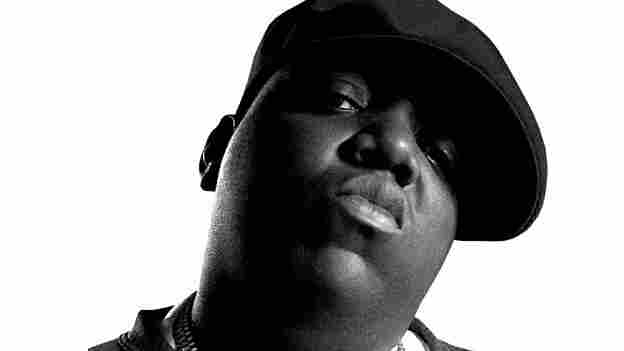 He recorded as The Notorious B.I.G. People knew him as Biggie Smalls, or Biggie. He was murdered when he was only 24 years old. Yet he's one of the most revered, emulated and biggest-selling rappers in the game.

Biggie's voice doesn't sound like anybody else's. It's plummy, wheezy, humid. It sounds like it comes from deeper in his chest than other people's voices.

He learned diction and phrasing from jazz saxophonist Donald Harrison, when Biggie was just a teenager in Brooklyn and still went by the name Chris Wallace.

"The first time I spoke with Chris, the Notorious B.I.G., he was on the stoop," Harrison says. "I was passing by and he just said 'Hello.' We started talking and it grew into a friendship. He was a lot younger, but he wanted to learn about music. And that was magic words to my ears."

Harrison wanted to make his neighbor a jazz musician. He gave him homework, made him learn how to scat a Cannonball Adderley solo and listen to Charlie Parker and Ella Fitzgerald. "We worked on various tonguing and speed and agility," Harrison says. "You have to slow things down really slow and take the time to phrase each note."

Biggie started rapping with his friends Sam Hubert and Mike Bynum when they were 10 or 11 years old. Hubert met Biggie in day care, and he became Big's DJ.

"We tried to go to the studio at the age, I believe, of 13. My man Mike's dad dropped us off. It was crazy. People don't know that he really did take it serious at a young age," Hubert says. "Things kind of seemed to come easy to him, but that was from a lot of really being focused on getting as good as you could. So all of these things were part of Chris' early development, when he was MC CWest, and it was like he was on a quest to become the greatest of all time."

Hubert says even after all that hard work and despite his obvious talent, Big lost focus for a while.

"He was on course to just be a brilliant student, college grad, possible doctor, lawyer," he says. "But the pull of the streets — it grabbed him, and he went that route. By 16 he was already gone. Neck deep in it. So him and his mom had a big fallout because he basically stepped off the path." Hubert says there wasn't much Big's mom, a teacher, could do about his choice. "What are you gonna do? Go out to the corner every day and bring him in the house by his ear? It's not gonna happen."

Big dropped out of high school after his freshman year. He reportedly began selling drugs, but he kept practicing. At least one person shot video of him free-styling on the street in Brooklyn when he was 17.

A local DJ named 50 Grand made a mixtape for Big that ended up in the Source magazine's Unsigned Hype column. Puff Daddy heard it and eventually signed Big to a deal. By 1993, he had a song in the movie Who's The Man? called "Party and Bulls--t."

With the wit and presence evident on that song, Biggie put other rappers on notice. But what he had more than anything else was flow. That's how rappers pace the voicing of their lyrics. They choose a rhythmic pattern to match each beat. Rapper AZ met Biggie when Big was rapping on street corners. He describes flow this way: "Flow is like water. It's like current. It's the fluidity of your words — and how you can slow it up, pick it up, chop it up. You can take a slow beat and flow fast on it because it's the structure of the words. Or you could take a fast beat and really screw it up and make it slow. Flow is a beautiful thing."

AZ says you can hear that on Biggie's song "Warning."

"I don't care where, what part of the Earth you're from, when you listen to it, the dialogue is slow enough for you to digest it," he says. "When you actually tell a story and be descriptive, that takes talent."

Biggie so impressed his peers in the mid-1990s that almost every New York rapper has recorded a song that includes a shout-out to him. "Big influenced a generation. This whole generation took pieces and bits," AZ says. "Everybody took a piece out of Big that's on the charts right now. Everybody."

And he only released two albums. On some of his songs, Big tells true stories. But on some of them he spins the kind of Homeric tales of street lore that can be heard in a lot of rap. There's violence in them, and guns and drugs.

"The Chris I knew was a good guy," Harrison says. "He wasn't the guy who did all these things. He was really looking for love and acceptance at the end of the day. That's what he was looking for. And he paid a price for looking for love."

Biggie was shot to death March 9, 1997, only 6 months after Tupac Shakur was murdered. The two rappers had been friends, and there's a lot of speculation that their killings were connected.

Big's friends still have a hard time talking about the music that he made. After all, in a way, their friend lost his life because of rap. "I can't wear a Biggie T-shirt, you know that, right?" Hubert says. "The pain is deeper than just, than what you could imagine. It's not on the surface."

Hubert says if Big had lived, the rap game would be very different today. He was so young — just starting to push the boundaries of his genre and tell stories about people whose voices don't get heard.

As AZ says, at the end of the day, rapping is about bringing people into your world. That's what Big used his voice for.