Accessibility links
Methane Monitors Recovered In Mine Blast Probe Investigators have recovered three key pieces of evidence in the explosion that killed 29 mine workers in West Virginia on April 5, NPR has learned. The evidence includes two safety devices that sound alarms and shut down mining machines when methane gas approaches explosive levels. Investigators want to know whether the devices were a factor in the blast.

Investigators have recovered three key pieces of evidence in the explosion that killed 29 mine workers in West Virginia on April 5, NPR has learned.

The two methane monitors were recently removed from the massive longwall mining machine that some investigators believe was the source of the deadly blast at the Upper Big Branch mine. They've been taken to the Approval and Certification Center of the federal Mine Safety and Health Administration in Triadelphia, W. Va. Investigators are scheduled to begin inspection and analysis of the monitors Saturday, according to Kevin Stricklin, MSHA's chief of coal mine safety.

"The company, the state, the United Mine Workers and MSHA all have the ability to participate in the testing of [those] monitor[s]," Stricklin said.

The company, Massey Energy, owns the Upper Big Branch mine and has been under fire for a litany of safety citations and violations at the mine. NPR documented an incident in February in which a Massey supervisor ordered an electrician to deliberately "bridge" or disable a methane monitor that had been shutting down a continuous mining machine.

The incident is being investigated by a federal grand jury, which has also asked witnesses about similar incidents, because disabling a methane monitor and continuing to cut rock and mine coal without one is a federal crime.

The methane monitors now in the possession of investigators have been sought for months. Lingering toxic gases and widespread destruction underground have plagued the investigation and delayed the gathering of evidence. 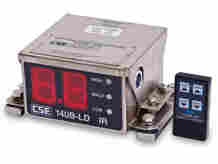 This methane monitor is the make and model of the monitors recovered from a longwall mining machine in the Upper Big Branch coal mine, according to Ronald Wooten of the West Virginia Office of Miners' Health Safety and Training. Investigators are analyzing the devices to determine whether they were tampered with and perhaps contributed to the deadly April 5 explosion. www.csecorporation.com hide caption

If the monitors were not working properly the day of the blast, methane gas could have formed without warning, and the cutting tool or shear on the mining machine could have sparked an explosion.

"We have visually inspected the methane monitors on the longwall face, and there is no evidence of them being bridged out," said Shane Harvey, Massey Energy's vice president and general counsel. "If they had been bridged out, we believe it would have been apparent."

But that doesn't match what West Virginia investigators have told Ronald Wooten, who oversees the state's mine disaster probe and directs the West Virginia Office of Miners' Health, Safety and Training.

"I can't say whether [the monitors were] bridged or not," Wooten said. "I can't tell you whether [they were] in working order or not. ... We'll know more when we check the [monitors] this weekend."

MSHA's Stricklin agreed: "I just think there's more testing to be done before we can conclusively say that's the case."

He added that monitors can be rendered useless in other ways.

"[You] could put a plastic bag over the sensor head," Stricklin explained. "[You] could move the sensor to a location that it wouldn't pick up methane very readily, and [you] could do it electronically, so there's a number of ways to defeat the methane sensor from actually detecting gas."

Methane monitors can also be recalibrated so they won't shut off mining machines when gas approaches the danger zone. That would be done in order to continue producing coal if the methane monitors kept shutting down the machines.

Some types of tampering with monitors could be detected by the device that operates like a black-box recorder. Its recovery was first reported Wednesday by Ken Ward of the Charleston Gazette.

Wooten told the Gazette and NPR that the device recorded key information about the methane monitors and the longwall mining machine in the minutes, hours and days before the explosion.

The black-box data have revealed at least two key pieces of information so far. First, the methane monitors didn't pick up much methane gas in those six days before the blast. And second, an emergency shutoff button was used to shut down the longwall machine about 90 seconds before the explosion.

Stricklin suggested that one reason for the use of the emergency shutoff button just before the blast was that there may have been "methane gas in the area and they wanted to try to knock the power so the gas didn't get to any electrical components on that machine."

Wooten said there may also be a benign explanation. The shutdown occurred during a shift change. "You can call it an emergency stop if you like," Wooten explained. "But it's often used, usually used, frankly, to shut a machine down."

Still, the low methane readings before the blast point to a fundamental conundrum for investigators. If there was enough methane for an explosion, why didn't the methane monitors shut down the machines? As Wooten put it, "Why weren't bells and whistles going off?"

This seeming contradiction explains why there's so much interest in the recovered monitors and any evidence of tampering.

Now, four months to the day since the mine was ripped apart by the explosion, investigators are finally in a position to determine whether the longwall methane monitors were tampered with or disabled.

Wooten was mindful of the anniversary and the task.

"There's nothing, nothing at all that we can do for these 29 lives that were lost except do our very best to make sure it doesn't happen again," Wooten said. "And that's what we're doing."

Stricklin said federal investigators won't reveal the results of this weekend's analysis of the monitors until he can brief the families of the workers who were killed. That briefing is expected in West Virginia on Tuesday.