Accessibility links
Diving Into The New World Of Electronic Self-Publishing: A True Story There's a lot of talk about electronic self-publishing in the age of the e-reader, but what's it like from the author's perspective? We hear one story of how an unpublished novel was rescued from limbo. 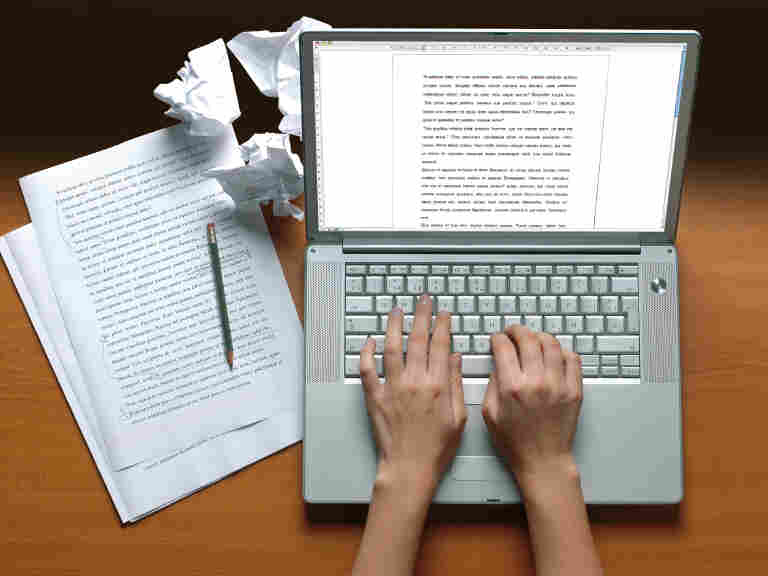 This is a post for everyone else who's written an unpublished novel or novels. I believe we are legion. Why live, after all, if you're not going to have fun writing about it?

My own five unpublished novels sat in boxes on the floor of my home office for years. Maybe four of them should stay there, but I recently pulled one out -- a gentle, optimistic, story called Small Blessings -- and when I reread it, I thought, "Damn! this is good." It was the last novel I'd written, finished a half-decade ago, and it seemed to me that the practice I'd had in writing the first four showed.

But when I finished writing Small Blessings, my agent said it wasn't "edgy enough" to find a publisher in the new century's nervous market. Back then, I took my professional self way too seriously to think about putting out a novel unsanctified by an agent. Besides, there was no viable distribution system for self-published novels, and just getting something between two covers required a substantial investment.

Time, however, makes you bolder. Or at least the last five years have made me bolder.

Time has also seen the release of the Kindle e-reader -- and a companion publishing platform that put the mighty reach of Amazon at the disposal of authors like me. Suddenly, viable self-publishing became possible for the $125.00 price of an ISBN.

(An aside: I would  never, ever think of loosing a novel, in any format, that's not been edited. Happily for me, Loretta Williams -- she was NPR's books and publishing editor at the time -- read Small Blessings early on and suggested revisions. If I hadn't known Loretta, I'd have asked writer friends or university writing teachers to recommend a freelance professional editor. Or maybe asked a book-loving friend to take a critical look. And a bit of advice: It's pointless to be fragile during the editing process. I've never written anything that a good edit didn't make better. Any editor is better than no editor, and a good editor is, well, priceless.)

Now, I had known about Kindle publishing for quite a while, however vaguely, before it occurred to me that the "self" in self-publishing could be myself. It was only when I re-read Small Blessings, and liked it, that I made that leap and finally Googled "publishing on Kindle."

Surprise, surprise: The whole process was so not rocket science. First, I entered product details -- the book's title, my name, a book blurb, and that ISBN (International Standard Book Number, which you can get through ISBN.org.). I designed my novel's cover, a process which I found oddly thrilling. (I kept it simple, using a photograph by my husband, overprinted with the title and my name.)

After this, I confirmed that I had the rights to publish the material; this consisted of checking two boxes. Next, I uploaded the pages and tweaked the book's appearance though the site's preview mode. Then I entered a price. (I chose $2.99. Amazon keeps 30%, authors get the rest.)

And that was it, as far as the mechanics of Kindle publishing goes. All I had left to do was take a double dose of What-the-Hell vitamins and hit the publish button.

Getting up the nerve to do this came down, I think, to the fact that I'd spent two happy years with the characters in Small Blessings, and felt that I owed them for their companionship. If you've never written a novel, you'll think I'm nuts. If you have, you know exactly what I'm talking about.

Twenty-four hours or so after pushing that button, Small Blessings was available for download on Kindle, iPhone, PC, Blackberry, iPad and Android.

What about other channels? So far, Barnes & Noble doesn't allow authors to e-publish their work, but they're working on a system -- called "pubit!" -- that should be available by late summer or early fall. But there are myriad other possibilities for self-publishing, as well as publishing on demand; I went with Kindle mostly because it takes so little investment -- and because, well, it puts your book on a website with a staggering amount of traffic. With all those people itching to buy books, I figure maybe someone -- someone, that is, who is not a member of my family -- will buy mine.

The one thing Kindle doesn't do is erase author typos. A friend has already let me know about mine.