Accessibility links
This Is Something Of A Thor Point A new all-ages comic gives Thor, the bluff, self-serious God of Thunder, a dose of humor and fun -- and it's turned our Thor-averse comics blogger into (by Odin's beard!) a fan.

This Is Something Of A Thor Point

This Is Something Of A Thor Point 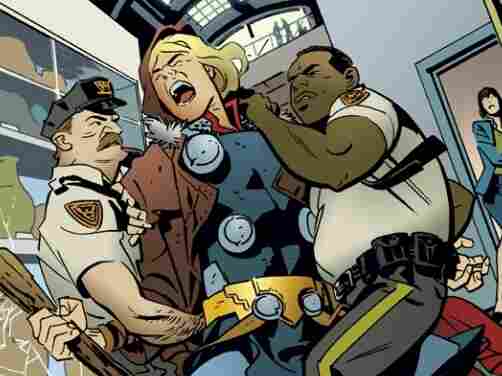 Last year, as casting news for the upcoming Thor film (helmed by Kenneth Branagh, helmeted by a coupla great big honkin' pigeon wings) began to leak out, I expressed some doubts.

Not that Branagh wasn't the right man for the job; the guy knows his way around thees and thous, as I mentioned, and his hagiographic Henry V was less heavy-hangs-the-head boy king, and more superhero-in-a-bowl-haircut.

No, my misgivings ran more to the order of "Your lead character's a haughty, shouty, empathy-proof god whose whole schtick is to act like a self-serious jerk, so, yeah, good luck with that." I may have also mentioned that those wings on his helmet made him look like a Bally's showgirl on the juice.

I heard from Thor fans, who defended their hero with oaths invoking Odin, and from devotees of classic drama, who threw words like hubris and hamartia around. Which, let's note, only sound like delicious Mediterranean appetizers.

The Thor fans assured me that his recent writers have gotten a good handle on the character, while the theater geeks reminded me that bringing the haughty down to earth has been a dramatic staple ever since Seven Against Thebes was standing-room-only.

But here's the thing: The character just plain leaves me cold. Always has, and neither fanboy assurances nor dramaturgical dissertations can change that. You respond to a given hero, or you don't, and Thor's in my don't pile. I can point to things like his haughtiness; his daunting, can't-tell-the-pantheon-without-a-scorecard cast of fellow Asgardians; or the hilariously fatalistic/portentous tone that clings to him. (Ragnarok'll do that to you). But that'd be like trying to articulate why you don't like, say, cantaloupe.

Last month, producers showed an extended trailer of the Branagh film at Comic-Con. A remarkably crisp HD version leaked online soon after. Marvel keeps taking it down until they officially release it to theaters, but if you're curious, it remains just a quick Google search away.

As trailers go, it's good-looking. When it comes to Asgard, you either go big or go home, and Branagh has gone big. Frost Giant big. The costumes are exactly as unapologetically over-the-top as they should be -- Loki's helmet, for example, is famously, even iconically ridiculous, the kind of thing you can't imagine working in three dimensions -- but there it is.  As Thor, Chris Hemsworth gets his shout on -- you haven't seen nostrils flare like that since Seabiscuit -- and there's Anthony Hopkins, Anthony Hopkinsing around.

It's also, as trailers go, crazy long and plot-heavy. And it's certainly true to the character -- well, to my own perception of the character, anyway, as my reaction to it was essentially: "Yep. That's the Thor I know and can take or leave, right there."

Marvel's cranking up more Thor comics in advance of the movie. I mean, just look at this page -- I count 4 mini-series, a spin-off, several one-shots and reprints, plus the main ongoing series. Which is to say: They're getting this guy ready for his Iron Man closeup.

Amid this thicket of Thors, one title -- Thor: The Mighty Avenger, written by Roger Langridge, with art by Chris Samnee -- stands giant-pigeon-wings-and-shoulders above the rest. 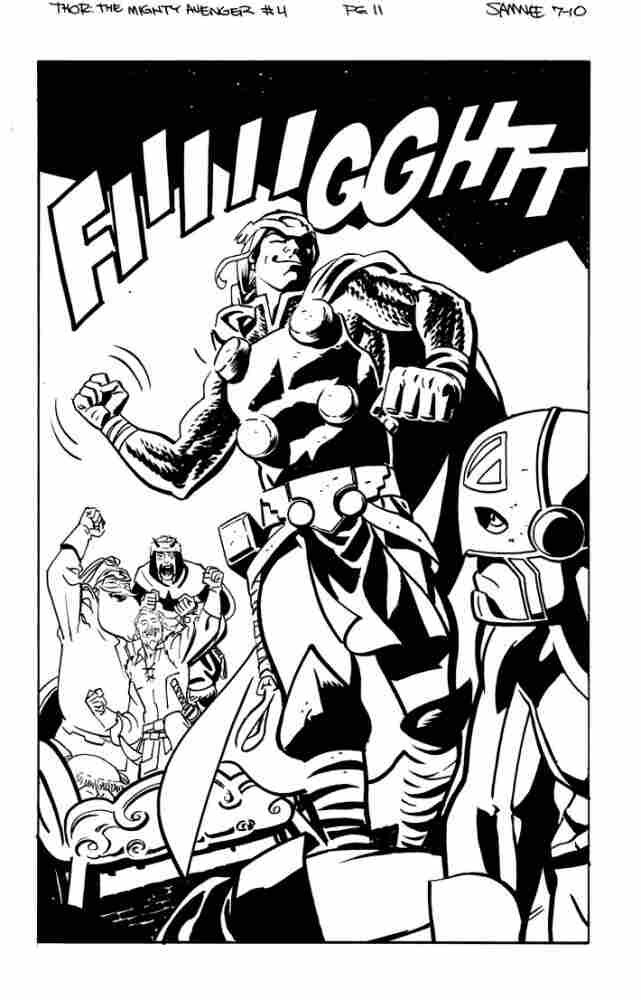 It's an all-ages title, for one thing, which means the book's mood doesn't default to brooding/fatalistic/self-serious. And while there's a overall story arc running in the background, there's a clear intent to tell a stand-alone story in each issue. 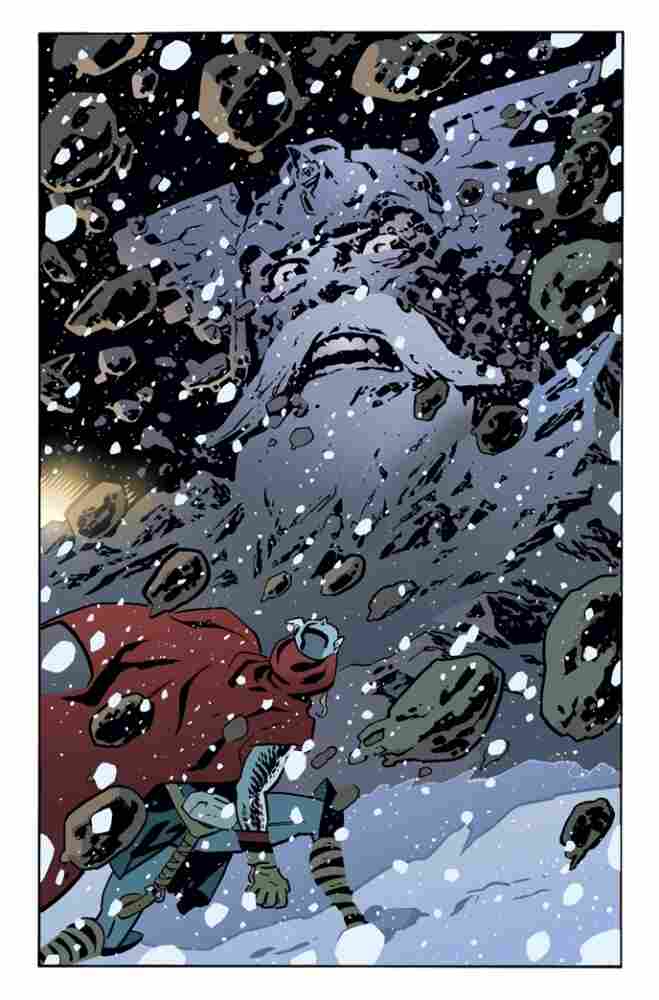 We've previously discussed why and how Langridge is deserving of your attention. He's doing great work here, even if his approach is straight from the fish-out-of-water playbook. Langridge has essentially rebooted the character, sending him crashing to earth with only hazy memories of his Asgardian life, having him meet-cute a museum curator named Jane who introduces him to the modern world as he attempts to reclaim his powers and his place among the gods.

Langridge's Thor, in other words, is everything the Thor who lives in my head is not: humorous, vulnerable, fascinated by the life on Earth and -- here's a word I'd never thought I'd type in re: the God of Thunder -- downright cheery. It's the oldest trick in the book, rebooting him like this, but the reason it's still in the book is because, when done with as much care and humor as it's done here, it works.

Langridge got me interested, but he wasn't what turned me around, what makes me love this book and this character to the (still surprising!) extent that I do. That's Chris Samnee. 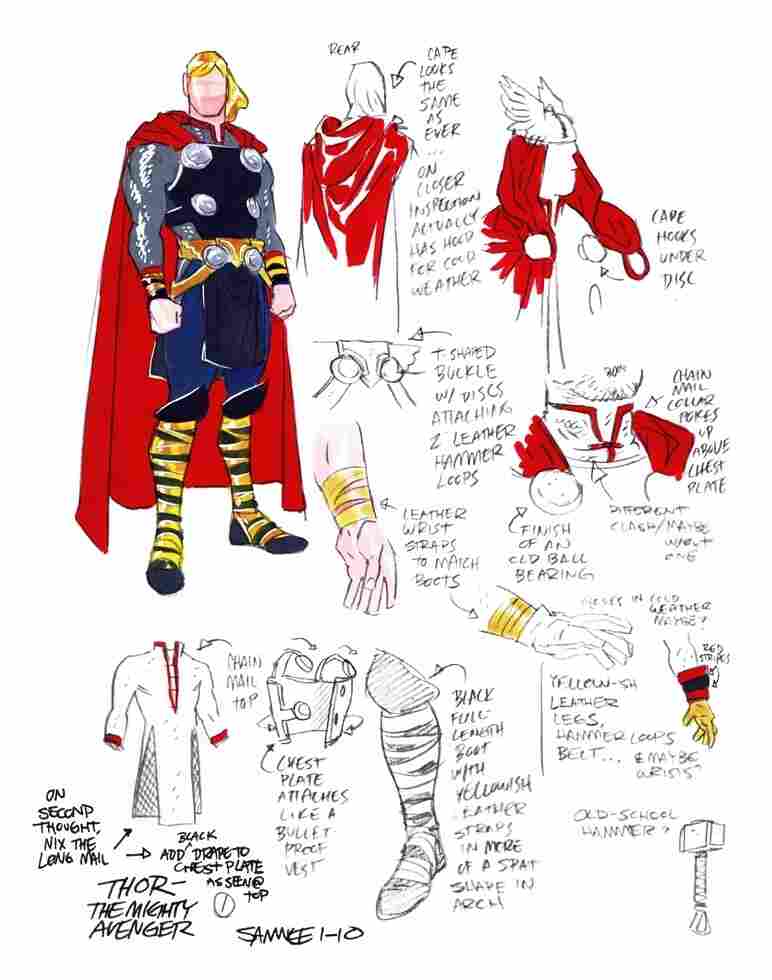 Samnee's art is freaking gorgeous -- you admire his layouts, and the way his linework manages to seem whimsical and cartoony while lending the characters, and the world, a palpable realism, a definite heft.  But what really makes Thor: The Mighty Avenger great comics is Samnee's visual storytelling -- the grin on Thor's face as he gets up from a bar brawl, the wary stance he adopts upon first encountering an answering machine. Samnee fills the book with happy little details that pull your eye across the page. The guy even makes the pigeon wings work. 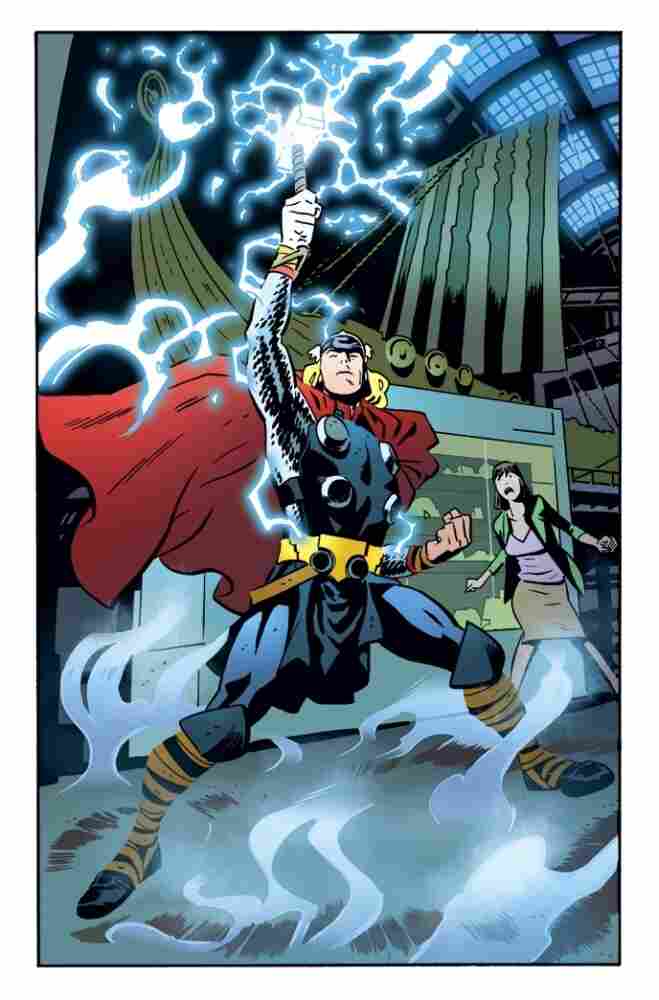 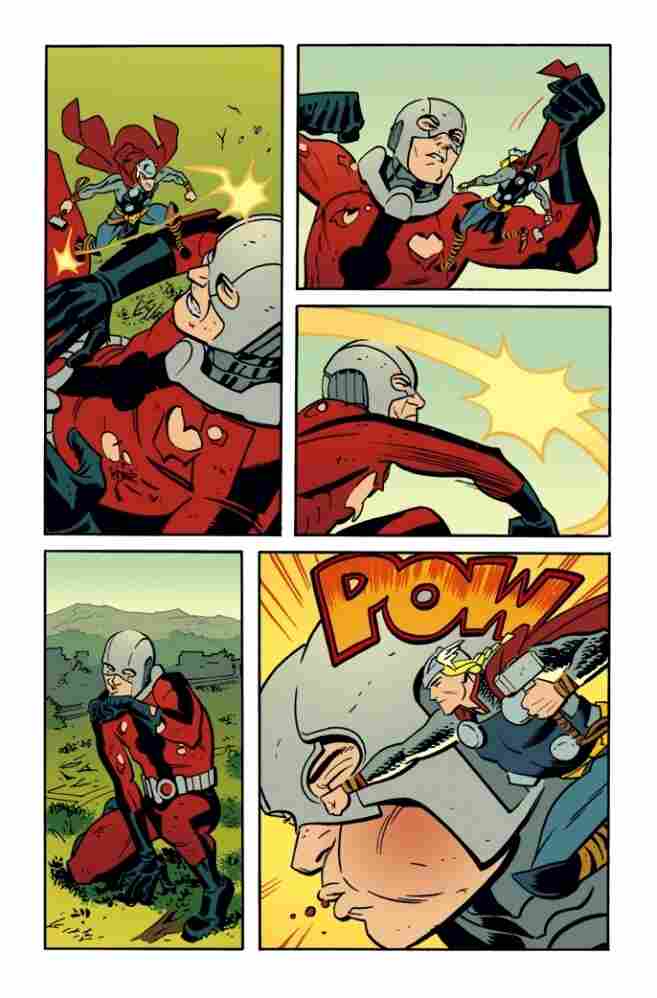 Meanwhile, over on the main Thor title, writer Matt Fraction is taking over in September, with art by Pasqual Ferry. Fraction's one of my personal Whither-Thou-Goest-I-Will-Go writers, so I was already going to check out their first issue.  When I first heard the news -- long before I picked up the Langridge/Samnee book -- I was encouraged that Marvel put a writer like Fraction, who enlivens his books with an easy, unforced humor, onto a character like Thor, who ... not so much with the funny, as noted.

I was encouraged, but not hopeful: There'll still be years of backstory to contend with; I couldn't pick Frigga out of a lineup of Balders; and there's the ever-looming threat that the title could get swept up in some company-wide crossover event at the drop of a helm.  And at the end of the day, I told myself, it'll still be Thor. Arrogant, omnipotent, tiresomely "Thou didst not reckon on the might of Thor, knave!" Thor.

But you know what? I'm in. And I may even pick up some of those reprints, to get up to speed. All because, practically overnight, because of one very specific, whimsical and, again, freaking gorgeous take on the character, I've become that which I once mocked: A fan of Thor. ...Thor!