Accessibility links
More Candidates Hunting For Votes With Guns The number of politicians posing with guns is rising -- with a bullet. Whether it's blasting away with a semi-automatic or shouldering a rifle, Republicans and Democrats alike are hunting for votes by packing heat.

Jesse Kelly, a Republican candidate for the U.S. House of Representatives from Arizona, is wielding an assault rifle in his political ads. Russ Carnahan, a Democratic congressman from Missouri, is pictured in a home state newspaper pointing a pistol at a target. Lou Ann Zelenik, a Republican congressional hopeful from Tennessee, posted on Facebook a photo of her smiling as she gets in "a little bit of practicing" at a target range.

So far, 2010 "has been a big year for guns in political ads," says Darrell West, director of Governance Studies at the Brookings Institution.

Well, it is a scary world. And voters are looking for can-do leaders who can solve complex problems easily. But there is the question of whether a parade of politicians pictured with guns makes us feel safer, or even more frightened.

The locked-and-loaded list goes on: Christina Jeffrey, a Tea Party congressional candidate -- and grandmother -- who lost in the June primary in South Carolina, can still be found on YouTube brandishing an AK-47 and extolling the virtues of the Second Amendment. Pamela Gorman, a Republican candidate for congress in Arizona, has made an Internet ad featuring her firing a variety of different guns. She's a "conservative Christian and a pretty fair shot," the narrator says.

"It's product differentiation," says Mac McCorkle, who teaches the politics of public policy at Duke University and the University of North Carolina. "In a big Republican year with a crowded field, a primary candidate posing with a gun is a quick attention-getting symbol or message to people that 'I'm really conservative.' "

Such a message, McCorkle says, especially appeals to the base voters -- those most likely to be voting in the primaries. 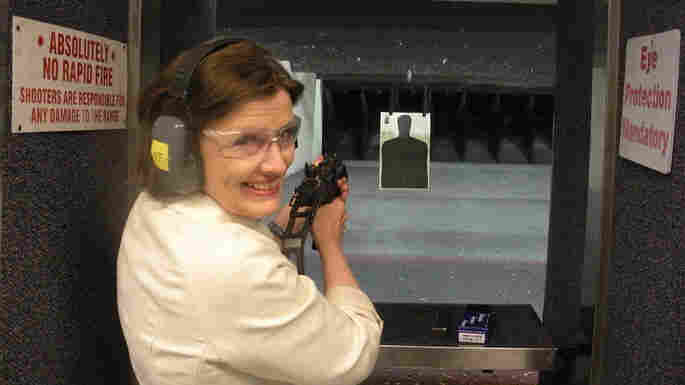 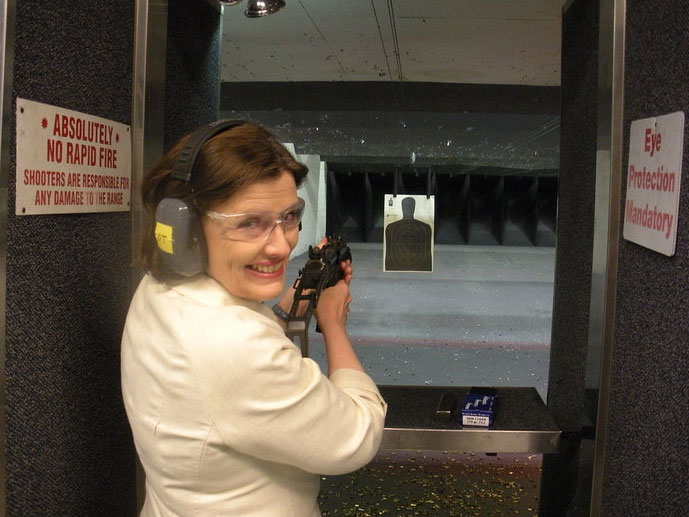 So will guns trigger the desired response in voters? Only time will tell. But Republicans and Democrats have come out firing. The Arizona Daily Star published a photo of Rep. Gabrielle Giffords (D-AZ), from her Flickr feed, testing the heft of an AK-47 with the military in South Asia. There may be method in Giffords' posting of that photo for the world to see; she just might be facing Jesse Kelly -- a gun-toting Marine Corps combat veteran -- in November.

Granted, candidates have posed with guns before. In 2006, West Virginia Republican John Raese posted an ad when he was running for the U.S. Senate, holding an antique rifle with the slogan "West Virginia Needs A New Gun In Washington." Raese, who didn't win, is running again this year. Republican presidential candidate Mike Huckabee of Arkansas stood with a shotgun in his hand in 2007.

On the Democratic side of the aisle: Presidential hopeful John Kerry, decked out in duck hunting gear and hoisting a shotgun, vogued for the camera in 2004. You can find photos of Sen. Chuck Schumer of New York firing a pistol, and news of his own first foray into the world of hunting (he shot three pheasants last year while hunting with Democratic Sen. Ben Nelson of Nebraska). And of course there is the iconic picture of 1988 presidential candidate Michael Dukakis standing behind a gun in the turret of an M-1 Abrams tank -- an image that did not work out well for him.

This year's widespread gushing over guns reminds Darrell West of another watershed moment in contemporary American politics. "The last time that happened was 1994, when Republicans used the gun issue to portray the Clinton administration as too liberal and out of touch with ordinary Americans," he says. "President Clinton later blamed his passage of the assault rifle ban as the reason for the GOP regaining control of Congress."

But this time around, the landscape has changed. "The difference this year is Congress has not passed any restrictions on guns, and President Obama has been silent on this issue," West says. "The question for this election is whether Republicans can blame Democrats for something they have not done."

The present wave of guns 'n' poses among female candidates may have started with Republican star Sarah Palin. The former Alaska governor and vice-presidential nominee has been photographed with assault rifles, shotguns and pistols.

One campaign video this year that got a lot of attention on the Web — 1.7 million YouTube views and counting — was for Dale Peterson, a Republican who ran (unsuccessfully) for his party's Commissioner of Agriculture nomination in Alabama. In it, the tough-talking ... dare we say, straight-shooting? ... Peterson shoulders his rifle as he speaks:

Palin's not the first arms-bearing woman to use guns in political ads. "Candidates have used guns in their ads primarily in Western and Southern states, where hunting is common and part of the culture," says Dianne Bystrom.

Wyoming Democratic U.S. Senate candidate Kathy Karpan appeared in a 1996 television ad hunting ducks with a 12-gauge shotgun, Bystrom recalls. "It was later discovered that the ad was staged in a city park," Bystrom says. "Still, Karpan's point was to portray herself as a hunter, and many political ads have staged footage."

When Ann Richards ran as Democratic candidate for governor of Texas, successfully in 1990 and unsuccessfully in 1994, she was photographed wearing hunting boots and a goose-down vest, and carrying a shotgun. Bystrom recalls that Richards campaign adviser Monte Williams said guns and candidates don't mix if it looks like the candidate has never been hunting before. She quotes Williams: "The degree to which you think your candidate is going to be out of place in that situation, obviously, the higher the risk. With Ann Richards, there was never any fear of her not looking good with a gun."

Guns in political ads today "convey a couple of things," Bystrom says. They can send an "I am one of you" message to voters in states where hunting and guns are part of the culture, she says. And guns "can be used to make a statement about gun control -- even when the candidate supports gun control, but dresses up as a hunter to convey support for some uses of guns."

In a new twist, many of this year’s weapon-wielding female candidates are shown with assault rifles. In her YouTube clip, Christina Jeffrey is standing in front of a lovely front door cradling an AK-47. A college professor -- as well as a grandmother, Jeffrey delivers a video mini-lecture on the Second Amendment. "We are a sovereign people," she says, smiling. "A sovereign people is an armed people."

In the continuum of hard-core issues -- from foreign policy to the military to budgetary concerns -- female candidates who bring out the artillery, McCorkle says, "are trying to drape themselves in the idea that 'I'm not just a mommy. Take a look at me -- I'm different from the stereotypical woman candidate.' "

That, of course, can be said for all the gun-holding candidates -- at least the "take a look at me" part.