Accessibility links
800,000 Stranded By Floods In Pakistan, U.N. Says The U.N. said it needs at least 40 more helicopters to ferry lifesaving aid to people reachable only by air. The appeal was an indication of the massive problems facing the relief effort more than three weeks after floods hit Pakistan, affecting more than 17 million people and raising concerns about possible social unrest and political instability.

About 800,000 people have been cut off by floods in Pakistan and are reachable only by air, the United Nations said Tuesday, adding it needs at least 40 more helicopters to ferry lifesaving aid to increasingly desperate people.

The appeal was an indication of the massive problems facing the relief effort in Pakistan more than three weeks after the floods hit the country, affecting more than 17 million people and raising concerns about possible social unrest and political instability.

Earlier, Prime Minister Yousuf Raza Gilani said hundreds of health facilities had been damaged and tens of thousands of medical workers displaced. The country's chief meteorologist, Qamar-uz-Zaman Chaudhry, warned that it would be two weeks until the Indus River — the focus of the flooding still sweeping through the country — returns to normal levels.

Chaudhry said high tides in the Arabian Sea would slow the drainage of the Indus into it. Those tides, he said, will begin changing on Wednesday.

"The flood situation is not yet over," Chaudhry said, adding that the Indus would reach peak flood stage late this week.

The floods began with hammering monsoon rains in the northwest and have swept southward.

Many of those cut off are in the mountainous northwest, where roads and bridges have been swept away.

The United States has deployed at least 18 helicopters that are flying regular relief missions, but the United Nations said it would need at least 40 more heavy-lift choppers working at full-capacity to reach the estimated 800,000 stranded in the country.

The United Nations High Commissioner for Refugees estimates that about 700,000 Pakistanis have been forced into makeshift settlements just in the southern province of Sindh.

In Shahdadkot, there's been a mad dash to shore up the embankments so the city doesn't get swamped.

Nadir Magsi, a member of the Sindh Provincial Assembly, led the community in building a levee, but the danger has not passed: Water is rising at places to within a foot of the top of the dirt and stone barrier. The barrier is all that separates the city of 200,000 people from inundation. 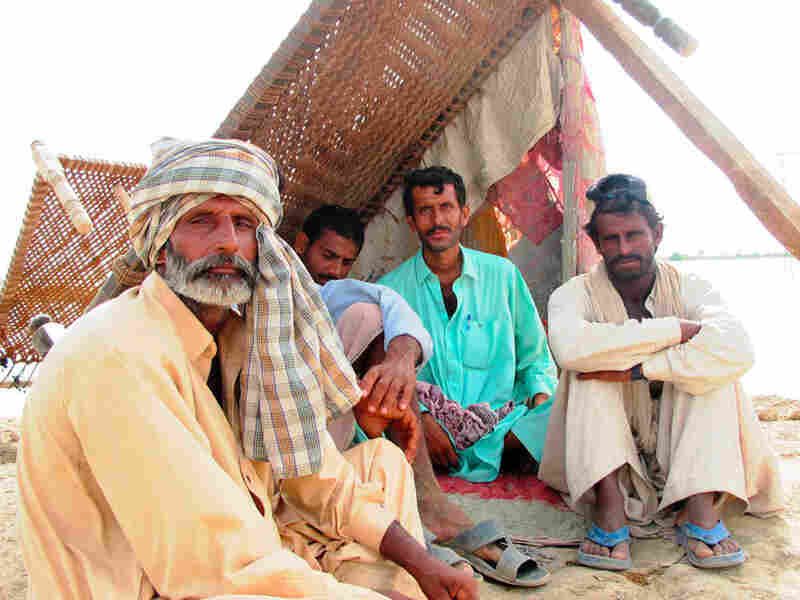 Zurif Kar, Hafiz Ullah, Abdul Majid and Sherun Kardarbush take shelter on top of the levee that has -- so far -- saved the city of Shahdadkot from the raging floodwaters. Susannah George/NPR hide caption

Magsi tells NPR's Julie McCarthy that villages on the other side of the levee are drowning.

"Thousands of acres of rice crops, all villages, thousands of people — all wiped out, there's nothing left," he says. "They've never seen water like this ... and it just keeps on going. It's terrible."

Rajesh Chawla stands on the top of the levee and surveys the landscape utterly altered by the floods. Once velvet green rice paddies are now waves of fast-moving gray-green water. Chawla says the stocks in his two rice mills have been sealed and safeguarded from the flood, but that is scant consolation for a man whose fields now lie beneath a vast expanse of water.

Chawla says there is no price tag for what has been lost.

"I can't explain how much I feel the pain," he says through an interpreter. "Not only the crops, not only the rice, but also the animals, livestock and all those things connected with agriculture destroyed, so I have no idea what we lost."

In the midst of the calamity, an old man sits at the edge of the levee. Quran in hand, he mumbles prayers. He likened the flood to Judgment Day — a sentiment that many who could not comprehend the magnitude of the water repeated.

While there have been no major disease outbreaks because of the floods, aid agencies are increasingly worried, saying contaminated water and a lack of proper sanitation were already causing a spike in medical problems in camps for the displaced.

"Pakistan and its people are experiencing the worst natural calamity of its history," Gilani said at a meeting on health issues in the flood zone. "As human misery continues to mount, we are seriously concerned with spread of epidemic diseases."

More than 3.5 million children are at risk from waterborne diseases, he said, and skin diseases, respiratory infections and malnutrition are spreading in flooded areas.

The problem is compounded by the flood's impact on the country's medical system — which has long been badly overstretched and underfunded. Gilani said the floods had damaged more than 200 health facilities, and that about one-third of the country's 100,000 women health workers have been displaced. Those health workers are the main primary medical care to millions of rural Pakistani women.

Dr. Jahanzeb Orakzai, Pakistan's national health coordinator, said a team has been formed to oversee the response to any flood-related health emergencies.

"Health problems usually arise in flood-affected areas after four to six weeks, and we need to be alert and prepared to tackle the situation," he said.

The aid group World Vision said it could be three months until some families are able to return to their homes.

"People are in urgent need of almost everything: shelter, health clinics, clean water, sanitation and livelihood support," Mike Bailey, the group's regional manager for advocacy said in a statement.

Local charities, the Pakistani army and international agencies are providing food, water, medicine and shelter to the displaced, but millions have received little or no help.

On Monday, President Asif Ali Zardari defended the government's much-criticized response to the floods, but acknowledged recovery would take a very long time.

"Three years is a minimum," Zardari said in an interview Monday with a small group of foreign reporters in Islamabad.

On Tuesday, officials announced that the government would give 20,000 rupees ($230) to every family affected by the floods, with a statement from Zardari's spokesman calling the payment "initial assistance."

Since the floods first swept the country, the Taliban and al-Qaida have been relatively quiet. But on Monday, three bomb attacks rocked the northwest, one of which killed the head of an anti-Taliban militia on the outskirts of the main city of Peshawar.

NPR's Julie McCarthy contributed to this report, which contains material from The Associated Press.