Accessibility links
Saturday Is Read Comics In Public Day: Come Out, Come Out Wherever You Are Read Comics in Public Day is Saturday! Rise up, comics readers! Because life ain't worth a damn till you can shout out, "I yam what I yam and that's all what I yam!"

Saturday Is Read Comics In Public Day: Come Out, Come Out Wherever You Are

Saturday Is Read Comics In Public Day: Come Out, Come Out Wherever You Are 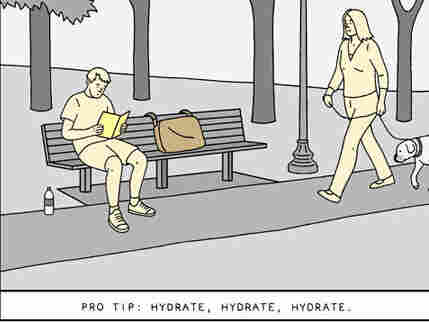 Saturday is Read Comics in Public Day. We will read them on the beaches! And in the parks! Robert Sergel hide caption

This Saturday, across the globe, I and hordes of my fellow comics readers will take our passion to the streets. And the parks. And the trains, buses and subways. And the bars.

If I know my people, the bars will figure largely.

We will grab a stack of comics and go forth into the wide world. Brave will we be. Powerful, expressionless, serene. We will brook no jeering, and fear no bullies. We will walk with our shoulders back and un-punched. Will hold our un-noogied heads high.

We will find a place amid the hurly-burly to sit. And there...we will sit. And we will read comics.

Take THAT, normals!  ARE WE FREAKING YOU OUUUUUUT?

Read Comics in Public Day is the brainchild of Sarah Morean and Brian Heater, who run The Daily Cross Hatch, a go-to site for smart, in-depth reviews and commentary about alternative comics.

Naturally, the Read Comics in Public Day notion has already come in for some light criticism from ardent superfans, to wit: "I've NEVER been ashamed to read comics in public! I don't need a special DAY for it!"

To these people I say, yes, fine, you are out and proud and living out loud. Good for you. Rah, you. But you are not the target demo here. Also, you could stand to simmer down a scosh.

Here's the RCiPD mission statement, which resonated strongly with me. A fact I found more than a little surprising.

Look; I read comics on the bus, on the subway and while waiting for chronically tardy friends at coffee shops, bars(!) and restaurants. In any of these places, I'll talk about comics loudly, forcefully and at considerable length to anyone who'll listen, and to many who won't. Compunction about comics, I got none.

Or so I thought.

Earlier this week, on my way to record the latest Pop Culture Happy Hour, I stuffed into my bag a handful of comics to read on the subway. Didn't think about it, just grabbed a bunch as I ran out the door.

When I took them out to read, I noticed something. Unconsciously, I had  selected books of a certain type. A type that can best be called: I am a Special Smartypants*, Comics Edition.

They were, all five of them, dense, serious, black-and-white comics about war and art and history and social class and blah. Again: I did not deliberately leave behind the superhero comics, and the manga, and the fantasy books, and the classic comic strip reprints I regularly read.

But as I sat there, staring down at the faithfully and exquisitely rendered landscape of some war-torn country or another, I tried to remember the last time I had read any superhero book, with its bright, colorful, spandex-clad mesomorphs facing off against aliens, or super-apes, or robots, or Nazis or alien super-ape robo-Nazis, while on the subway or at a bar. And I couldn't come up with one.

Clearly, then, my subconscious is a rank poseur. Who still cares enough about what others might think about his reading material to unconsciously self-edit his public choices. My subconscious, bless him, also clings to the downright laughable idea that the kind of tiresome, ungenerous people who'd judge me for reading comics would distinguish between, say, Footnotes in Gaza and Fantastic Four.

Here's the thing, though: I love the Fantastic Four. Jonathan Hickman and Dale Eaglesham are doing some fun, trippy, literally fantastic stuff on that book. So why pretend I don't? To strangers on the friggin' SUBWAY?

So. I'll be seizing Read Comics in Public Day as a chance to overcome the last lingering shreds of my internalized geekophobia. It'll be me, the dog and a pile of shamelessly goofy, high-concept, boldy colored, alien super-ape robo-Nazi-smashin' adventure.

So if on Saturday, while you are out and about, you should see me or someone like me reading a comic book, say hi. Ask me what I'm reading -- but only if you're prepared for me to, you know, tell you. Loudly, forcefully and at considerable length.

COMICS READERS! MAKE YOUR VOICES HEARD WITH THESE CHEERS AND CHANTS FOR RCiPD MEETUPS!

We're here!
Jeff Lemire!
Get used to it!

BRR! IT'S COLD IN HERE! Satellite monitors detect the presence of Bobby Drake, aka Iceman (or possibly Captain Cold, and given the barometric pressure we can't completely rule out the possibility of Mr. Freeze, the Icicle and/or Killer Frost, though, really, it's tough to know for sure).....IN THE AT-MOS-PHERE!

What do you want?
To peruse sequential art in the bright light of the upper world without getting accosted by street toughs!
When do you want it?
Now would be good! If that's okay!