Accessibility links
Women Are Not Marshmallow Peeps, And Other Reasons There's No 'Chick Lit' A recent debate over book reviews and the ubiquity of similar Brooklyn writers stresses the desperate need to put away the term "chick lit" forever.

Women Are Not Marshmallow Peeps, And Other Reasons There's No 'Chick Lit'

Women Are Not Marshmallow Peeps, And Other Reasons There's No 'Chick Lit' 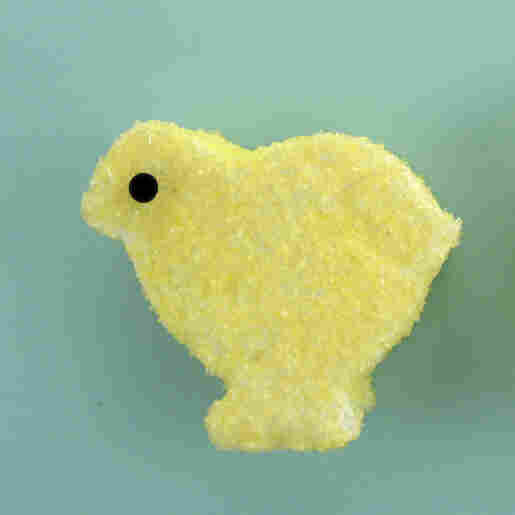 Here's an idea: If you're going to try to report on the fact that a couple of women who write books have tried to start a discussion of whether the mega-response to Jonathan Franzen's Freedom is symptomatic of a too-narrow view of interesting fiction, it might be a good idea to stay away from the formless and dismissive term "chick lit" in discussing them.

The way this started is that Jodi Picoult, who has sold many millions of books worldwide, pointed out on Twitter on August 16th that the rave for Franzen's book in The New York Times wasn't exactly a giant surprise, and said, "Would love to see the NYT rave about authors who aren't white male literary darlings." She later added some specifics, pointing out that "if you're the NYT, for every Danticat/Diaz review, there are ten [Jonathan] Lethems and Franzens." You can read more about Picoult's position here. (Remember: NPR had a piece on this very thing just recently.)

And then on Monday, novelist Jennifer Weiner tweeted, "Call for non-Franzen novels about love, identity, families, The Way We Live Now. I pick Anne Tyler's DIGGING TO AMERICA." She attached the wry hashtag "#franzenfreude," which she'd kicked off a few days earlier. Her entire approach, which had begun with a tweet about the president "succumb[ing] to Franzenfrenzy," hadn't been hateful or bitter -- just sort of amused. And she wasn't alone: I mentioned on Monday that I, too, found the slathering of praise (such as "novel of the century" ten years into the century) rather odd, even without having any particular opinion about whether the book is good (as I still don't).

Weiner, who wrote the terrific and unexpected novel Good In Bed (which dares to suggest, among other things, that not all of a contemporary woman's personal problems can be solved with a makeover and a diet, try to contain your shock) all the way back in 2001 and has been writing fiction about women ever since, is blown off as a "chick-lit author" here and here, and in The Atlantic, while her books aren't exactly called "chick lit," it has to be pointed out that they (and Picoult's books) are "often referred to as 'chick lit.'" (We're not saying it's chick lit or anything ... we're just saying SOME HAVE SAID it is chick lit, y'know.)

It's a category we just don't even need anymore.

I've written before about how much I dislike it when people don't distinguish between popular women's fiction and the much narrower category of shoe fiction (by which I mean fiction disproportionately focused on the acquisition of designer shoes and bags and other yabba-dabba-doo that is inevitably described in nearly pornographic detail). But at this point, I think the only solution is to stay away from the term "chick lit" as much as humanly possible, because it's become a term that means "by and about women, and not something you need to take seriously, although we're not necessarily saying those things are connected, so it might be a giant coincidence."

Jennifer Weiner writes primarily about relationships between and among women. She writes about families, she writes about loss, she writes about loneliness, and she writes about a wide variety of other human emotions. The fact that she wrote a book called In Her Shoes doesn't mean she writes primarily about shoes. (Seriously, is that where this started?) That book is about family -- just like, for instance, Jonathan Tropper's This Is Where I Leave You (a great book, by the way), which may or may not be a book written with greater skill, but which does not find itself assigned to a special genre as a result of being about a man, written by a man, and concerned with a man's thoughts and feelings and complicated family and romantic relationships.

The term "chick lit," as I mentioned today on Twitter as I was composing this entry, increasingly makes me feel like I'm being compared to a marshmallow peep just for reading books by and about women. I know what romance novels are -- I read some of them, I dislike many of them. I know what shoe fiction is, in my own experience -- it's fine, but it's not very nourishing. There are subgenres within commercial women's fiction that are real and identifiable.

But I don't know what "chick lit" is anymore, except books that are understood to be aimed at women, written by women, and not important. And I can't get behind that.