Accessibility links
St. Petersburg: A Glimpse Of What Russia Is Not St. Petersburg is considered the European face of Russia. But some tourists are restricted and may not see beyond the cultural capital's designated highlights. Some residents say that is by design: Political leaders show off the city while hiding the country's darker side.

Listen
St. Petersburg: A Glimpse Of What Russia Is Not 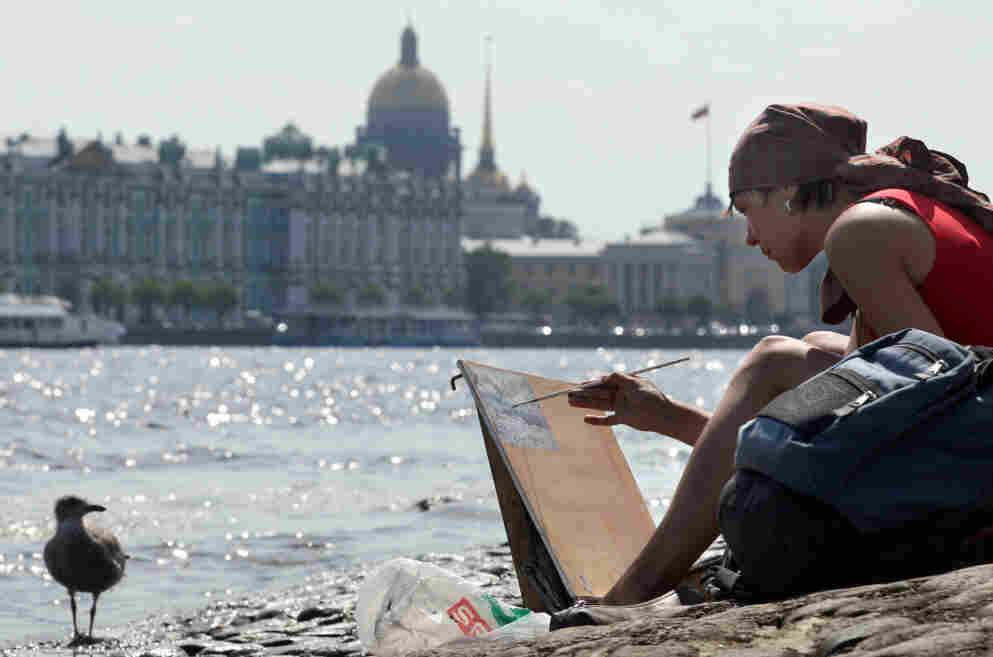 Russia's "second city," St. Petersburg, was built three centuries ago — which is recent, compared with most cities in Russia. Emperor Peter the Great imagined a luxurious playground for the ruling elite, a true window to Europe. Now there are some residents who think Russia's current leaders are using the city for the same purpose.

Summer in St. Petersburg means incredible white nights. The sun never sets over the canals and cafes, and this cultural capital explodes with life. There's a festival of boats on the river, fireworks and concerts. Who can blame Russian President Dmitri Medvedev for wanting to show off the city?

Russia Not Easy For Tourists, But Worth The Trip

Russia Not Easy For Tourists, But Worth The Trip

This summer, he used St. Petersburg as the backdrop to tell fellow leaders at an economic forum that Russia is modernizing, "changing for its own sake, as well as for the sake of the rest of the world."

This place was just a Swedish backwater until Russia claimed the territory three centuries ago, and Peter the Great built a grand Russian capital.

Vladimir Gelman, dean of political science and sociology at the European University in St. Petersburg, calls St. Petersburg the most European city in Russia.

He describes how the Soviet government moved the capital to less glamorous but more functional Moscow after the revolutions of 1917. Hundreds of thousands of Soviets would later starve to death in St. Petersburg — then known as Leningrad — during the German siege in World War II. For a period of years, the city became dirty and crime-ridden. But through it all, Gelman says, Peter the Great's European architecture remained. And today, two natives, Medvedev and Prime Minister Vladimir Putin, are leading a renaissance.

The city's a showcase again, Gelman says. But he adds this caveat: When it comes to politics, neither Putin nor Medvedev want Russia to be any more European.

For tourists who are coming for a few days, he says, St. Petersburg "looks like the European face of Russia."

"If they go 100 kilometers out of city," he says, "they will see an absolutely different landscape."

Sticking With The Program

But many tourists don't go anywhere else, and that may be by design. The Russian government usually requires visitors from the U.S. or Europe to have an official invitation letter and a visa — not in St. Petersburg, though. 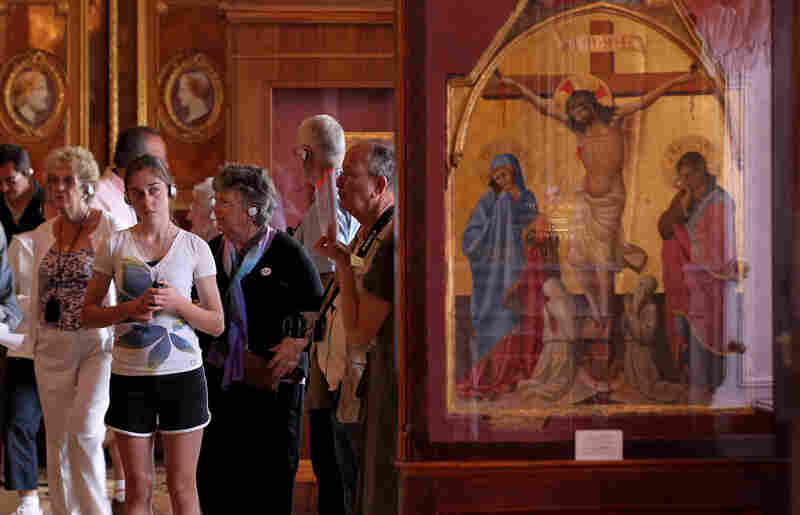 In the new St. Petersburg, visitors who don't have visas can leave cruise ships and ferries to explore — if escorted at all times by an official tour guide.

Elena Etsina, a curator at the Hermitage Museum, one of the city's hot spots, says tourists always have a guide or a tour leader and visit only those sites in the program.

Etsina is proud of her museum's art collection, which rivals the Louvre. There are works from all the giants, including Picasso, Da Vinci, Michelangelo and Rembrandt.

But this European-style museum is only a taste of Peter's Russia.

"It's not right to say I know what Russia is after visiting St. Petersburg and especially just the Hermitage Museum," she says, "because we have no Russian art here."

Disguising The Darker Side

What does this city mean for the Russians who live here?

As a child, Iroida Titova went with her father back and forth from St. Petersburg to Siberia to visit her mother, who was deported by Stalin because of her German descent. Now 66, the widow says she is bothered by all the tourists who pass through without learning much about darker times.

"One should really live in Russia to really understand it. But people can come visit here, see something and leave," she says. "Life was hard for me. But what is it for them? Why should they know?"

Her friend Andrei Galkin, though, says he can get frustrated. The 21-year-old worries that this gorgeous city may help visitors forget uglier sides of Russia — the corruption or human rights abuses. Whenever Medvedev or Putin come for a big visit, he says, it means one thing: a police crackdown to make sure there's no mischief.

"They do hide the real life here," he said. "They show off what they want to show off."

An earlier Web version of this story incorrectly stated that the Soviet government moved the capital from St. Petersburg to Moscow in the 18th century.