Accessibility links
Our Storied Lives: The Quest For 'Something More' Humans have been telling stories ever since we began talking. This ability to craft narratives helps us shape our lives and our interactions with others and, says one neurologist, pushes us to excel and give life meaning. 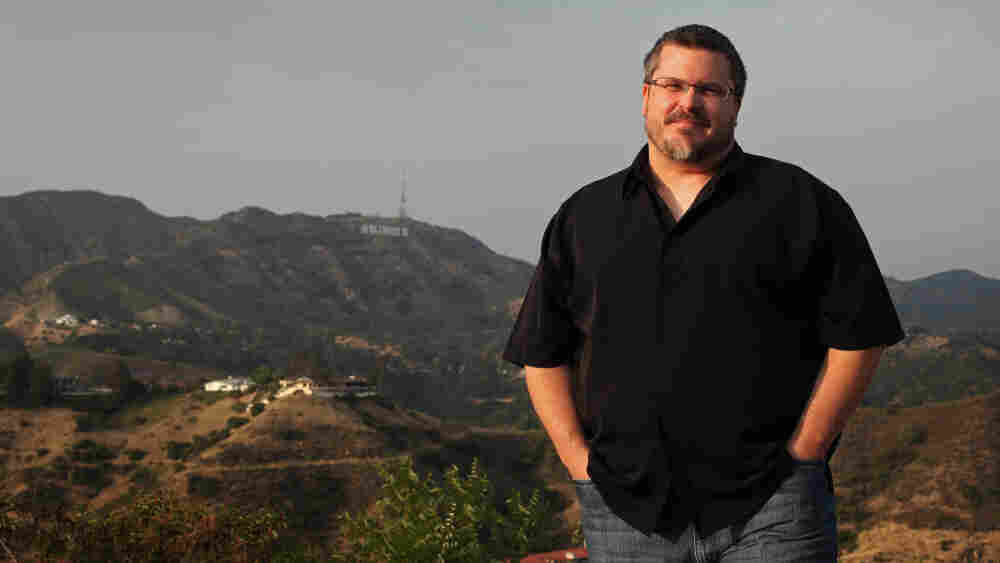 Natural-Born Storyteller? Shaun Parker moved from Menasha, Wis., to Los Angeles nearly 20 years after an illness in his family put his adolescent dreams on hold. "I liked the idea that I was meant to be something more," Parker says. "I always said that we're kind of the sum total of the decisions we make in life, and I just felt like I could very easily make the decisions that lead me away from that path of being more, whatever it is." Katie Falkenberg for NPR hide caption

Not long ago, Shaun Parker was waiting offstage at a club in Hollywood. He was about to take the microphone in front of hundreds of people and tell a story he'd been working on his entire life.

"I was so nervous, I felt like I wanted to throw up," he says.

This was more than stage fright — Parker says what was at stake for him was pretty much everything.

Humans have been telling stories ever since we began talking. These stories have become a kind of tool for us, as powerful as an ax or an arrow.

I have enormous respect for nonhuman creatures. But I don't think we're going to get them to consider this 'something more' that they can be or that they ought to be.

And although we may not be aware of it, each of us thinks of our life as if it were a story in the making.

"You're constantly rearranging the narrative of your life," says Antonio Damasio, a behavioral neurologist from the University of Southern California and author of the upcoming book Self Comes to Mind, which is about how our sense of story influences our lives. "And you're rearranging as a function of the experiences that you have had and as what you imagine your experiences in the future ought to be."

That's certainly true of Parker, an aspiring actor in Los Angeles who grew up in Menasha, Wis., a town on the northern tip of Lake Winnebago with lots of paper mills and good winter sledding.

When Parker was in eighth grade, a teacher had his class write letters to themselves. The topic: how they saw their future lives.

Parker's letter said he expected to "find somebody that I love and maybe work in a mill and get a house and have some kids."

Four years later, the teacher sent back all the letters. And when Parker read his, he realized he'd already started rewriting his future.

By then, he says, "I liked the idea that I was meant to be something more. I always said that we're kind of the sum total of the decisions we make in life, and I just felt like I could very easily make the decisions that lead me away from that path of being more, whatever it is." For Parker, that meant coming up with a life story that took him far from Menasha.

The Stories Of Our Lives

The quest for "something more" comes directly from our awareness of our own life story, Damasio says. Humans have a unique awareness that our lives are stories that begin when we're born and end when we die. And because we know we're going to die, Damasio says, we are not satisfied with merely surviving day to day. We want our personal story to mean something.

Other species don't have that same concern, Damasio says.

"I have enormous respect for nonhuman creatures," he says. "But I don't think we're going to get them to consider this 'something more' that they can be or that they ought to be."

And it's that concern about creating a meaningful life story that has pushed humans to do new things, like exploring distant lands and building great civilizations, Damasio says. It's also one reason we're drawn to tales of remarkable people like Odysseus or Joan of Arc.

And it made him wonder how he could make something special of his own life.

Damasio says we frequently model our own life stories on a story we've seen on stage or at the movies.

"We begin by being spectators of a story," Damasio says. And then, at least in our minds, "we turn that into our own story."

Parker focused on the part of King Arthur's story that involved the quest for true love. Arthur had Guinevere; Parker decided his destiny was a young woman named Heidi.

At the storytelling series Mortified, performers dig through old diaries and love notes to find a glimpse into their ridiculous, self-centered, pathetic and comical adolescent lives. Then they get onstage and share it with an audience of complete strangers.

At a recent Mortified show, Shaun Parker shared the story of a love letter he sent to his teenage crush. Watch a clip from his performance below. We guarantee you'll be on the floor laughing. Or crying.

"I was in the cafeteria, and I remember looking over, and I saw her walk in, and time kind of slowed," Parker says. But for a chivalrous young man like Parker, there was a problem. "I was kind of stumped by the fact that I was a senior and she was a freshman, and that did not feel right."

So he decided to wait and just be friends with Heidi until she was older. But it was hard, and after 18 months, he decided he had to declare his love in the form of a music video. Parker lip-synced to the song "Wait" by White Lion — picture a good-looking, all-American kid with a mullet, wide lapels and a long-stemmed rose.

But he never showed it to her, and instead sent an old-fashioned love letter. He soon got one back.

"Dear Shaun, you are the best friend I have ever had," Parker says as he recalls the letter. "And she ... she underlined 'friend.' "

He was crushed. [Watch Parker read Heidi's letter in the video clip to the left, from his performance at Mortified.]

Setbacks aren't unique to humans, but Damasio says our response to them probably is. We see them as changing the plot line of the life story we thought we were writing, and we cope by coming up with a new narrative.

"In any moment of the present, we are buffeted between the lived past, about which we cannot do anything, and the future, the 'what next?' " Damasio says.

Humans never stop looking ahead to something better. In the same way King Arthur deals with his unfaithful queen by focusing on the Holy Grail, Parker rebounds from Heidi by imagining an entirely different future for himself: He's going to make it in the movie business.

All through college, he works on that dream. By graduation, he has an entry-level job with Disney lined up. But on the very day Parker is to leave Wisconsin, his father takes a call from his doctor.

The doctor informed his father that he had stage four prostate cancer. "So that's where my life went on pause," Parker says.

This was a major setback for Parker — one that lasted nearly two decades. But he never gave up on the life story he was determined to write for himself.

That's why, many years later, Parker stepped onto a stage in Hollywood to tell his story.

The second part of this story aired Tuesday, Aug. 31, on Morning Edition. Find out how Parker got through those two decades, and how stories help us cope with death.

This story was produced by Rebecca Davis and edited by Alison Richards.

'Mortified': Step 1, Exhume Your Past; Step 2, Share With All

If you've ever dug out your old diaries and read through them on a rainy afternoon, you'll know firsthand what ridiculous, pathetic, self-centered, comical and, yes, sympathetic creatures we all were as adolescents. Now imagine taking those words and reading them aloud in front of a roomful of strangers, exposing all your petty comments about schoolmates and the momentary crushes -- it makes you blush just thinking about it. Well, apparently there are folks all around the country who want to reveal their 12-year-old selves in public, and they do so, if chosen, for performances of a live show called Mortified.

The idea for Mortified started in the late 1990s when executive producer Dave Nadelberg ran across a love letter he'd written in high school but had never sent. Upon reading it and sharing it with friends, he realized the wealth of material these old diaries and journals hold -- material that almost never sees the light of day. So he and co-executive producer Neil Katcher formed Mortified in 2002 and started working with people willing to dig through their own unearthed material to present before an audience.

Fortunately for the audience, Mortified performers don't just stand up onstage and read raw, unedited material. Katcher says he and Nadelberg put people through a curating process. "It is much the same way that a documentary filmmaker or a museum curator might look at a collection of materials and fine-tune it down to a specific collection."

Working with diaries, love letters, poetry and photographs, they pull out the funniest bits and tie them all together into a sharply focused, 8-12 minute narrative. In the end, Katcher says, the experience can be cathartic for both the contributor and the audience -- to experience once again the comic tragedies that consumed us as adolescents and to be reminded that we have, in fact, survived even the most painful and embarrassing of life's events.