Accessibility links
A Friendship Tested By Deep Gaza-Israel Divide Mohammed Saqar from Gaza and Dana Levy from Israel met as teenagers at a peace camp in the U.S. They once believed in peace in the Middle East. But now they've have lost hope for Israel and Gaza. 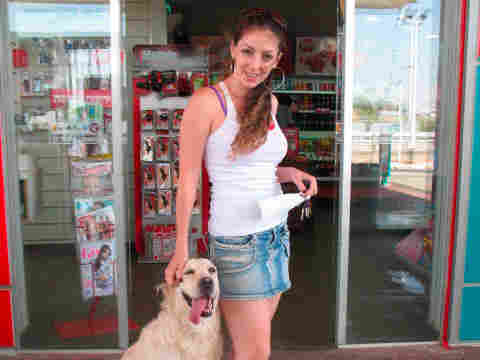 Dana Levy lives in Tel Aviv, Israel. She became friends with Mohammed Saqar at a summer camp in Maine in 2006, but they haven't seen each other since. He lives in the Gaza Strip, and they are separated by the security barrier. Courtesy Dana Levy hide caption

This is the story of two friends — one Israeli, the other Palestinian — who once both believed in peace.

Dana Levy and Mohammmed Saqar met when they were teenagers in the late 1990s at a summer Seeds of Peace workshop in the U.S. state of Maine. The program takes young people from opposite sides of conflict areas and helps them learn about each other.

Fourteen years later, sitting in her apartment in Tel Aviv, Dana reminisces as she looks over an old photo album.

The 28-year-old works as a photo archivist at a TV station. She has the lean frame of a dancer — in fact, she manages a salsa club on the weekends.

Dana says Mohammed hated her when they first met, but his antipathy didn't last long.

"We had this thing that we would wake up an hour before everyone, and walk around in the morning in camp and talk," she says, flicking her long brown hair as she speaks.

"It was very, very weird. It was two weeks of hatred and then two weeks that we would spend the whole day together," she recalls.

'The Siege Changed Everything'

Mohammed, now a married father of two, lives in the Gazan city of Khan Yunis. His apartment couldn't be more different from Dana's. It's on the top floor of a dilapidated building. The walls are unpainted concrete; toys belonging to Mohammed's sons are scattered around the bare floor.

Mohammed teaches for a living. His emphatic gestures match the urgent tone of his voice when he describes the difficulties of his life. But when he talks about Dana, his words become softer, more hesitant.

"When I was young, I started to think, OK, when I grow up and become 25 or 26 or 30, and I am becoming a leader here, she is becoming a leader there, then we can marry, so we can produce a new people," he says with a laugh.

Their friendship has endured for 14 years, but their idealism has not. Both have lost cousins in the region's conflicts. Dana's died in the 2006 war in Lebanon, Mohammed's in clashes with Israeli soldiers.

Mohammed says he stopped believing in a peaceful solution to the conflict when Israel imposed a blockade on Gaza — what he calls a siege of Gaza.

Gazan Mohammed Saqar, on Dana Levy, an Israeli he has been friends with since both were teenagers

Israel began restricting shipments to Gaza after militants of the Hamas movement captured Israeli soldier Gilad Shalit in the summer of 2006. A year later, after Hamas seized control of Gaza from the rival Fatah movement, Israel stopped most goods from entering Gaza except the most basic humanitarian aid. Israel recently eased the blockade, but is still not allowing much-needed construction materials to enter Gaza.

"I saw many Israeli attacks and assaults against us. I see people dying, I see children killed, I see women killed," Mohammed says. "Despite this, I could have something positive for peace. But in the siege, everything changed."

Mohammed says he feels trapped. He is educated and only 30 years old, but sees little future for himself. He has been outside of Gaza only once, on that trip to the U.S. when he was 16.

He dreams of being able to study in another country, but like most Palestinians in Gaza, he can't leave.

"We can't travel," he says flatly. "I want to go to Britain. I want to see their culture. America, Canada, I want to see how people live there. Why do they put us in this prison?"

And so the boy who dreamed of creating peace through marriage is these days a man hardened by bitter experience.

He now says fighting is the only way Palestinians can gain their independence.

"I told her [Dana] many times, we must turn into armed people here, we must get weapons," he says.

Gaza Is 'Three Worlds Away From Us'

While Mohammed is reminded every day of the conflict with Israel, just 50 miles up the coast in Tel Aviv, Dana rarely thinks about it.

"Here in Tel Aviv, it's a different country. It's sad to say, but it's true. I think about it because of him [Mohammed], but other than that, it's not here, I don't feel it," she says. "Gaza is like three worlds away from us."

Eighty percent of Gazans rely on food assistance from the international community, and by conservative estimates half the population is unemployed.

We wouldn't be able to be friends if we talked about politics. How can you be friends with your enemy? Because we are supposed to hate each other, you know? But we don't, so we are just friends.

In contrast, Israel is booming. Tel Aviv is the center of a high-tech industry that has helped the Jewish state weather the global recession. This year, tourism has surged to the highest levels ever in Israeli history.

Dana and Mohammed's attitudes reflect the growing divide. The only Israelis whom Palestinians in Gaza see are soldiers. Israelis think of Gaza as nothing more than a launching pad for thousands of rockets that have hit Israeli communities.

Dana says she has seen her fair share of suicide bombings, and she doesn't trust Palestinians. But she can't tell Mohammed that.

Polls consistently show that Palestinians and Israelis seem less interested in peace than ever before.

Dana says among her friends, no one even discusses the conflict anymore.

'How Can You Be Friends With Your Enemy?'

Back in Gaza, Mohammed acknowledges that he and Dana never talk about politics.

They have a ritual: They both light cigarettes when they speak on the phone, as if they were two friends sitting on a stoop.

Mohammed says he'd like to see the woman he calls his best friend again someday,

Sitting on her sofa in Tel Aviv, Dana says despite how close they've become over the years, there is a reason she and Mohammed can't discuss their beliefs.

"We wouldn't be able to be friends if we talked about politics. How can you be friends with your enemy?" she asks. "Because we are supposed to hate each other, you know? But we don't, so we are just friends."

Dana says she recently asked Mohammed if she could send him a care package, something to make his life easier. The only thing he wanted was a pack of cigarettes, the brand she smokes.