Accessibility links
The Books: Making Music Through Found Sound The experimental duo has spent the past decade making music based on samples — snippets of audio that its members chop up and rearrange. Sample-based music is nothing new, but the way the two men behind The Books write music puts the band in a class by itself. Their fourth album is called The Way Out.. 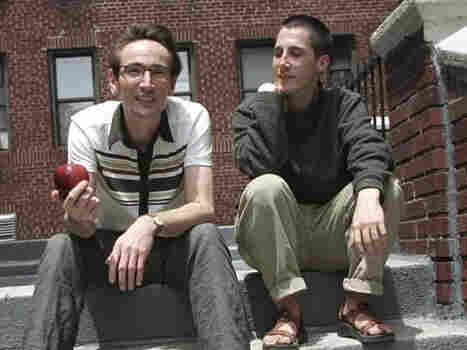 The experimental duo The Books has spent the past decade making music based on samples — snippets of audio that its members chop up and rearrange. Sample-based music is nothing new, but the way they write music puts the band in a class by itself. The Books' fourth album is called The Way Out.

The circumstances that brought the two men together are a lot like the music they make: Both rely on large doses of randomness, luck and chemistry. Ten years ago, Nick Zammuto met Paul de Jong when a mutual friend discovered that the two lived in the same New York City building. De Jong invited Zammuto and his wife over for dinner.

"He had this stack of minidiscs against the wall and I asked, "What is that?' And he said, 'Oh, that's my reference materials,' " Zammuto says.

Those minidiscs held sound that de Jong had collected from various sources over the course of many years. Zammuto was making his own field recordings, and the pair started working together immediately, matching de Jong's found sound with Zammuto's guitar and turning sampled clicks and whirs into percussion. Just two weeks after meeting, they finished their first song and named it "Enjoy Your Worries, You May Never Have Them Again."

"I think in that first track, almost all the elements are there," de Jong says. "The found sound and our instruments and the fact that we recorded pretty unassumingly in our apartments with the window open and you hear a crow in the background, and it all becomes part of the music. I think that created our sound right there."

This would eventually become the first song on their first record, which was called, in typically chopped-up and rearranged fashion, Thought for Food.

Zammuto studied chemistry in college and taught himself music theory. De Jong was born in Rotterdam, in the Netherlands. He grew up in what he calls a musical family and learned to play the cello at a young age.

There are elements of contemporary classical, sample-based electronic music and folk in The Books' music, according to Mark Richardson, managing editor of the music website Pitchfork. He reviewed each of the band's first three albums for the site, and he says The Books' music doesn't quite sound like anyone else's.

"Their music is easy to appreciate immediately because they use pretty sounds — it's not harsh, noisy, they use space," Richardson says. "Ringing guitars, cello, melodic — but it's also hard to put a finger on, and there's an in-between-spaces aspect to The Books that I find really appealing."

The band has carved out not only its own sound but also a particular way of creating music. De Jong (the collector) and Zammuto (the composer) only use audio from analog sources: video or audio cassettes or LPs they find by raiding thrift stores while they're on tour. Never from the Internet. Nothing that their listeners would be likely to find on their own. It's all stored in the studio in de Jong's house — a large room filled with photographs, musical instruments, books, records and, in the corner, a computer that houses the single most important element of The Books' sound. It's de Jong's sample library, much bigger now than a pile of minidiscs against the wall.

"The sound library now has 35,000 named samples, and it's growing at a staggering rate," de Jong says. "I have hundreds and hundreds of uncut hours of sound that I'm working on every day that we've never seen before."

Those recordings include meditation instructions from self-help tapes, single bass guitar notes and conversations between a parent and child.

"It really is irrelevant who the originator is of these recordings," de Jong says. "What is relevant is that there is a universal humanity."

That human connection is important to de Jong and Zammuto's process, as well as to the music itself. De Jong now lives at the northern edge of the Hudson Valley in New York. Zammuto lives an hour farther north, on a wooded hillside in rural Vermont. Though they could easily send digital files back and forth over the Internet, they still meet once a week, halfway between their houses, to talk about their progress — how samples are grouped together and what music they might inspire — before they return home to keep working.

The way de Jong and Zammuto process samples is different from how most sample-based audio works. Hip-hop often uses samples as a repeated, looped hook. The Books' members tend to pick samples that wouldn't occur to anyone else.

Take the sample that forms the backbone for "30 Incoming," from The Way Out. It's a series of messages pulled from a single answering-machine cassette that the pair found in a thrift store.

"I knew that was the beginning to a song," Zammuto says.

When de Jong gave him the sample from the answering-machine tape, Zammuto found that the voices gave him clues that would guide the song's emotional tone, but his musical inspiration came from what might seem like a throwaway element.

"So the idea that I had was actually to use the dial tone ... as an actual musical instrument," Zammuto says.

Sitting in his studio in a shed behind his farmhouse, Zammuto demonstrates how he ran the dial tone through a filter that created a pulsating effect, then matched the tone to de Jong's cello. He added guitar, played with a tremolo effect to give it the same wobbly feel as the processed dial tone, as well as a complicated, driving drum pattern and his own multitracked voice, to bring the whole song together.

Zammuto says that when he first listened to the sample that anchors "30 Incoming," it struck him as a sincere, moving, intimate moment. But others who listened thought it was creepy. That gap, he says, is actually an important element in The Books' music.

"Just by placing two disparate elements next to each other, they immediately start a conversation as your brain tries to wrap itself around their relationship," Zammuto says. "And I think it's your mind itself that creates that relationship in a lot of ways. And that's what the music is about, is the ability of the mind. ... Given any two things, your brain will fill in the gap, and we're always interested in how big we can make that gap before it falls apart."

In that sense, The Books' music isn't so different from any other composition. Zammuto and de Jong just happen to turn the human voice — in all its vulnerable, rhythmic richness — into an instrument: another sonic block out of which they construct complex emotional structures that vibrate to life in the mind of the listener.