Accessibility links
Fall Movie Preview: A Low-Wattage Summer Gives Way To The Serious Season Film critic Bob Mondello offers a look at the fall movie season, from documentaries to dramas and even one more installment from America's most famous young wizard, now heading for the end of his cinematic road. 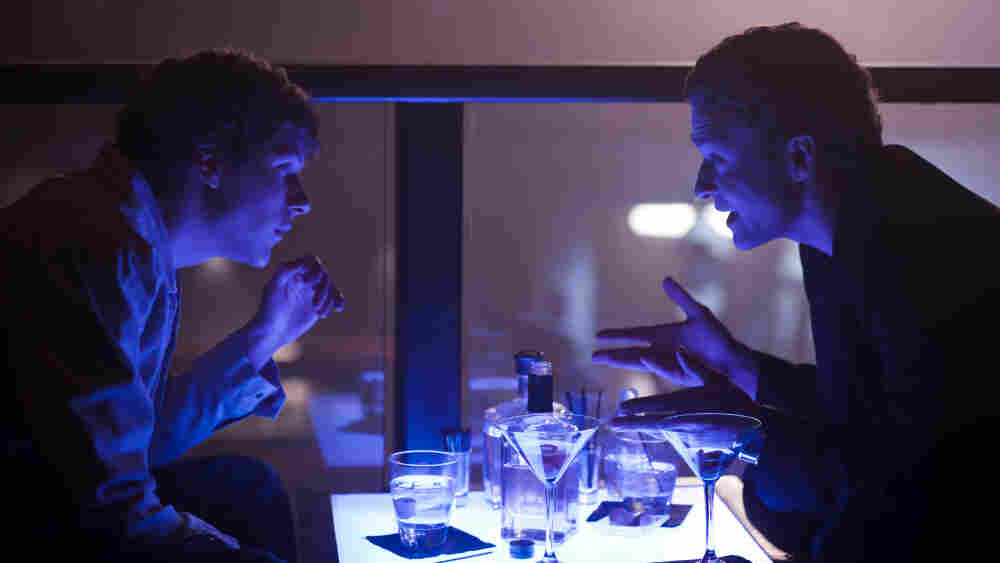 Jesse Eisenberg and Justin Timberlake in The Social Network, one of the many films that will compete for your attention this fall. Merrick Morton/Columbia Tristar Marketing Group hide caption

[Note: When I first published this story this morning, it accidentally had my byline on it, because that's the default setting when I'm publishing. It is, however, written by NPR movie critic Bob Mondello, who is fortunately very likely to forgive me. -- Linda Holmes]

Hear that sputtering sound? It’s the summer movie season gasping to a close –- dollars are up, but barely (and only because of 3D’s premium pricing), while attendance is the lowest it’s been in thirteen years. Hell, without the sequels (Toy Story 3, Iron Man 2, Twilight Eclipse, Shrek Forever After) that grabbed four of the top six spots on hot weather box office charts, the Summer of 2010 would’ve been the kind of bust you have to go back to the 1950s to find.

Now come cooler weather, diminished box office expectations, and a slew of pictures grounded at least theoretically in reality, among them: Nowhere Boy, about Liverpool lad John Lennon, who’s going nowhere fast until he decides to form a boy-band in the early ‘60s; The King’s Speech, about Elizabeth II’s royal dad (Colin Firth) and the speech therapist (Geoffrey Rush) who helped him stop stammering; Fair Game, with Naomi Watts as Valerie Plame, the CIA agent outed by the Bush administration and Sean Penn playing her diplomat hubby; and The Social Network, David (Fight Club) Fincher’s version of  how a nebbishy Harvard student (Jesse Eisenberg) cooked up a little thing called Facebook in his dorm room and became a billionaire.

If fictionalized real-life doesn’t make you want to slip out to the multiplex, you can skip the fiction and just take in a documentary. Among the more promising: Gerrymandering, about the politics of geography; Waste Land, about a sprawling landfill where garbage is transformed into art; I’m Still Here, about actor-turned rapper Joaquin Phoenix (by his buddy Casey Affleck), Inside Job, about the causes of the Wall Street meltdown; and Waiting for "Superman," in which the Inconvenient Truth team look at possible fixes for an education system that even defenders say is broken.

None of this is to suggest that Hollywood’s gone soft on more conventional fare. You’ll still be able to see Denzel Washington taming a runaway train in Unstoppable, Clint Eastwood going all ethereal in Hereafter, and everybody's fave teen wizard staring down the man with no name …. er, nose … in Harry Potter And The Deathly Hallows. And those whose tastes run to something a tad less demanding can rest assured Hollywood’s got them covered, too. The titles Knucklehead, Douchebag and Jackass will all be on multiplex marquees this fall.