Accessibility links
Kitchen Window — Why The Priest Fainted: An Ode To Eggplant This fruit commonly used as vegetable is perhaps less loved in the U.S. than in India and the Mideast, where food writer Monica Bhide grew up. But after years of presenting different renditions to American friends and family, she's found ways to woo the eggplant skeptics — including these spice-laden recipes and tips. 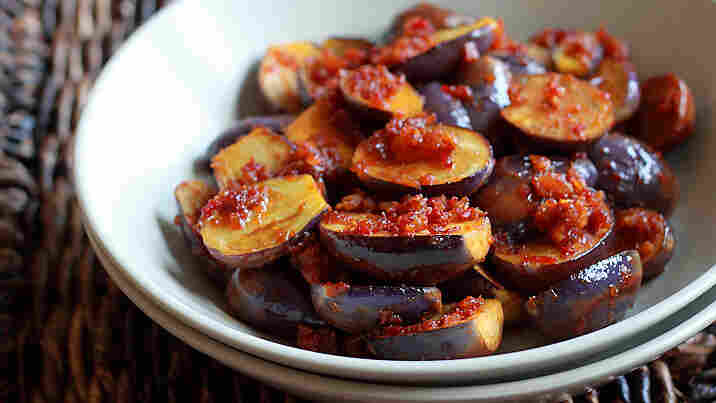 Get recipes for Imam Bayildi, Eggplant Frites With Caper Remoulade, Sambal Eggplant (above) and Eggplant Caponata.

There are a couple of stories about the origins of Imam Bayildi, a Turkish eggplant dish that translates as "the priest fainted." One holds that upon tasting this dish, a priest swooned from the flavor. The other is that he fainted at the expense of all the olive oil used to make the dish. I blatantly disregard the latter story, for to me, good eggplant dishes can indeed make you swoon. Of course, for me (and a billion other people), it is in my blood. Translation: Eggplant originated in India.

While it is most often used as a vegetable, eggplant actually is a fruit, like the tomato. ... Just remember this joke: Knowledge is knowing that eggplant is a fruit; wisdom is not using it in fruit salad.

When I moved to the United States 20 years ago, I was surprised to find that most of my American friends did not share my love for this amazing fruit. While it is most often used as a vegetable, eggplant actually is a fruit, like the tomato. They are both members of the nightshade family. Just remember this joke: Knowledge is knowing that eggplant is a fruit; wisdom is not using it in fruit salad.

An engineer turned food writer, Monica Bhide writes about food and its effect on our lives. Her work has appeared in the Washington Post, the New York Times, Food & Wine, Prevention, Cooking Light, Health and Self. Her latest book is Modern Spice: Inspired Indian Flavors for the Contemporary Kitchen (Simon & Schuster). Read more at her blog, A Life Of Spice.

While eggplant had strong supporters in the West — Pope Pius IV (1559–'66) greeted guests with gifts of the plant — others called it "mad apple" for the theory that it caused insanity. In India and the Middle East where I grew up, eggplant has been welcome at the dinner table for thousands of years.

Speaking of insanity: When I got married, my husband loved most of my cooking but could not stand to eat eggplant. Considering my obsession with it, I decided to try every way to feed it to him. Initially I could only find the classic large, pear-shaped fruit with shiny, deep-purple skin, but more recently I have found colors ranging from purple to green to white to red. I've experimented with everything from Italian (smaller than the classic globe variety, with some light streaks on the skin), Indian (small and round) and Japanese (quite thin, with light purple skin). I'm thinking about trying the tiny round green Thai version, some of which are no bigger than peas.

I have been married for 17 years, and over the years, my husband and now my kids have tried — and sometimes even enjoyed — eggplant in many different renditions: stir-fried in Chinese dishes, deep-fried as Japanese tempura, smothered in cheese and baked (Italian-American eggplant Parmesan). My personal favorite preparation, though, is roasting eggplants over an open flame or in a hot oven. The result can then be mashed and mixed with sesame paste for the Middle Eastern dip baba ghannouj, cooked in an Indian-style bhartha with onions, tomatoes, cilantro and spices, or mixed with a white sauce and kasseri cheese to create a silken-textured Turkish dish, begendi — one of life's greatest pleasures.

I thought nothing about eggplant would surprise me — until Chef Todd Gray of Equinox restaurant in Washington, D.C., mentioned eating an eggplant gelato made with 50-year-old balsamic vinegar. So I guess I still have a lot to learn about this wonderful fruit. My husband is adamant that no amount of coercing will get him to taste eggplant gelato. The kids, so far, have said they are open to one bite.

-- "Never give them a free hand with the oil — they are terrible old soaks and will drink up however much you add," says Annie Bell, author of Gorgeous Vegetables. "Start with just a little, and with time they will behave themselves and soften up."

Believe It Or Not

A restaurant in Cobb County, Ga., serves a "labor-inducing eggplant parmigiana." Apparently, to date 300 pregnant women have given birth within 48 hours of eating this dish. I leave you to draw your own conclusions. (The story and recipe can be found here.)

-- Bee Yinn Low, who runs the popular RasaMalaysia.com, says to soak the eggplant in saltwater to prevent it from turning brown before cooking. When ready to cook, drain off excess liquid and pat dry.

-- Chef Todd Grey of Equinox in Washington, D.C., combines eggplants with tomatoes or balsamic vinegar, as their acid pairs well with this fruit.

This recipe is adapted from Gorgeous Vegetables by Annie Bell (Kyle Books May 2010). She says she deviates from the traditional method of braising, roasting the eggplant instead, which she prefers. She says roasting also allows the onions and tomatoes to concentrate in flavor. Be sure eggplants are the same size or they won't cook evenly. 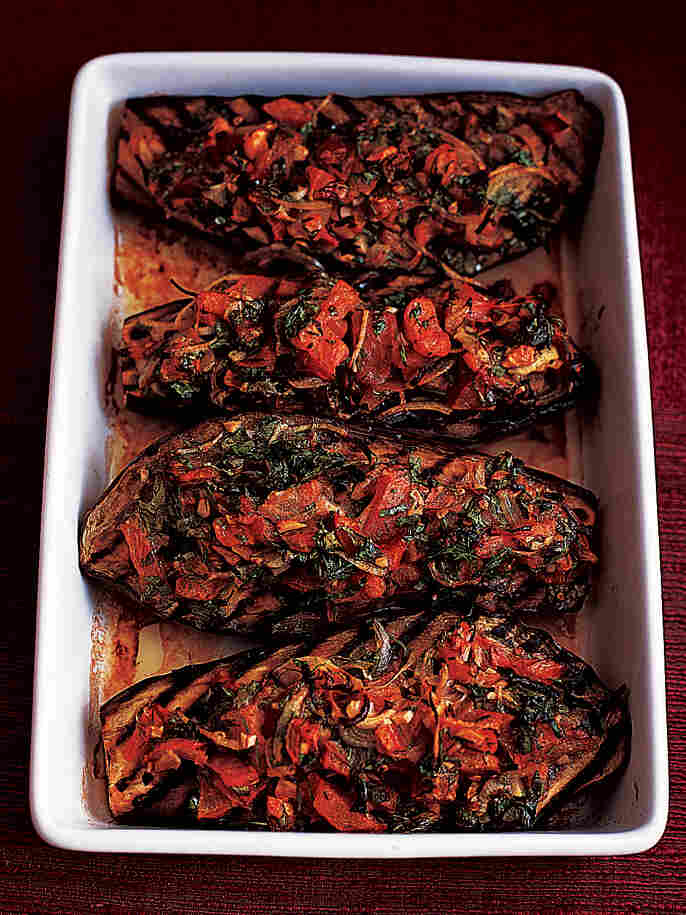 2 beefsteak tomatoes, about 1⁄2 pound each

Heat a ridged grill pan over medium heat for several minutes. Trim the stem ends from the eggplants and halve them lengthwise. Brush them all over with 2 tablespoons of the oil and season with salt and pepper. Grill the cut surface for about 5 minutes, until golden (you may need to grill them in two batches). Lay the eggplant halves cut side up in a baking dish.

In the meantime, bring a small pan of water to a boil and fill a bowl with cold water. Cut out the core from each tomato. Plunge the tomatoes into the boiling water for about 20 seconds and then into cold water. Slip off their skins and coarsely chop the tomatoes. Combine them in a bowl with the onion, garlic and herbs. Add some salt and pepper and the remaining tablespoons of olive oil and toss.

Pile the vegetable mixture on top of the eggplants and roast for 40 to 45 minutes, until the vegetables are nicely golden. Leave to cool for at least 15 minutes, and serve either warm or at room temperature, with more olive oil poured on top.

Chef Todd Grey of Equinox restaurant in Washington, D.C., created this recipe for his son as an alternative to French fries. He says it is a surprise for people to see this fruit fried instead of a starchy vegetable. 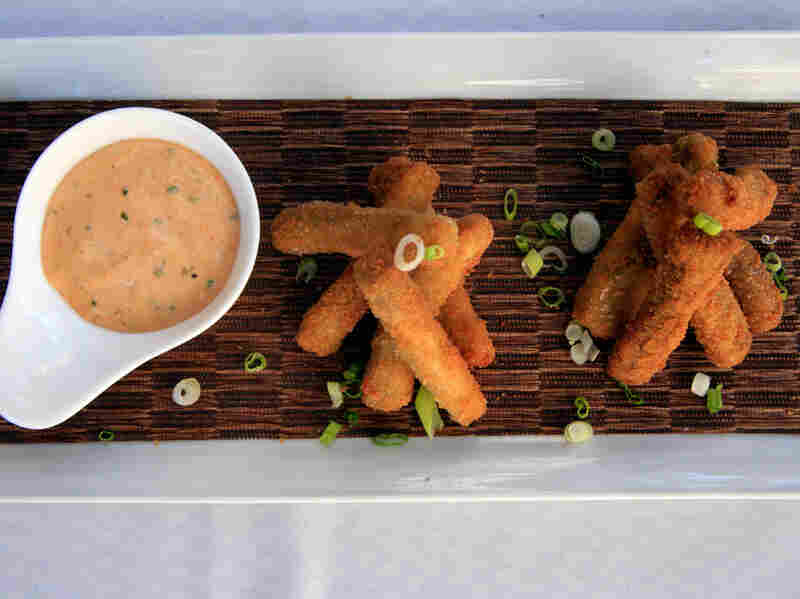 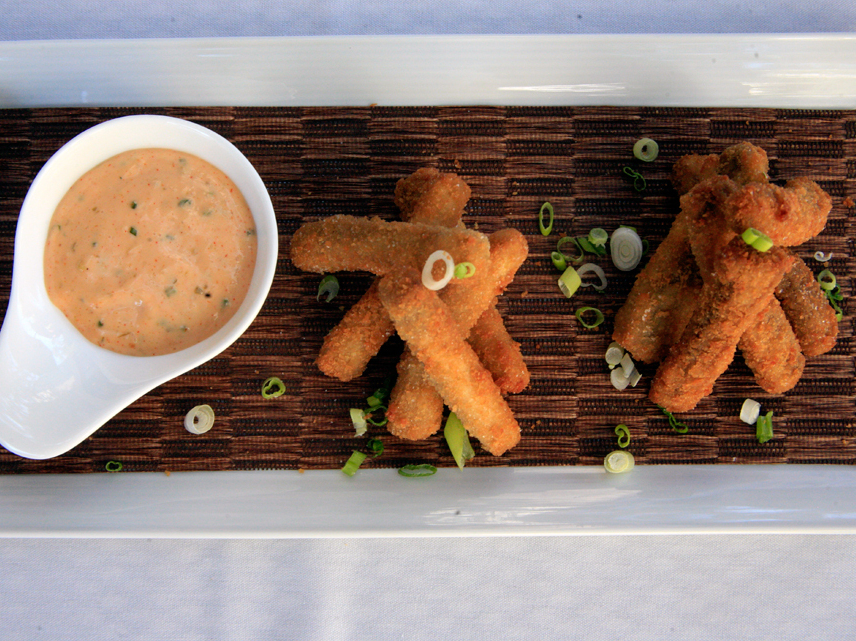 Makes about 40 pieces (depending on the size of eggplant)

Caper Remoulade, for serving (recipe below)

*Panko is a type of Japanese breadcrumbs that are coarser than most used in the United States. It's available at most supermarkets.

Place the flour in a wide, shallow bowl or baking pan and season it with salt and pepper. Whisk the eggs with 1/2 cup water in another shallow bowl. Pulse the panko in a food processor until finely ground and place in a third bowl.

Peel the eggplants and cut them into finger-size sticks, about 1/2-by-1/2-by-3 inches. A few at a time, toss the eggplant pieces with the flour and shake off any excess. Coat completely in the egg wash, then roll in the panko to cover. Lay the frites on a parchment paper–covered baking sheet in a single layer and refrigerate until ready to fry.

Meanwhile, make the remoulade by combining all the ingredients in a small bowl and mixing well.

Pour a few inches of canola oil in Dutch oven or deep, heavy pot, and heat to 350 degrees. (Check with a thermometer.) Line another baking sheet with several layers of paper towels. Deep fry the frites a few at a time until golden brown, about 2 minutes. Remove with a skimmer and drain on the paper towels.

Serve with the remoulade.

This is a common way to prepare eggplant in Malaysia. In this recipe, from Bee Yinn Low, who runs RasaMalaysia.com, the eggplant soaks up the piquant flavors of sambal, "which reminds me of home," she says. I used Indian eggplant, which is a small round eggplant. I would not suggest this dish for the heat averse. 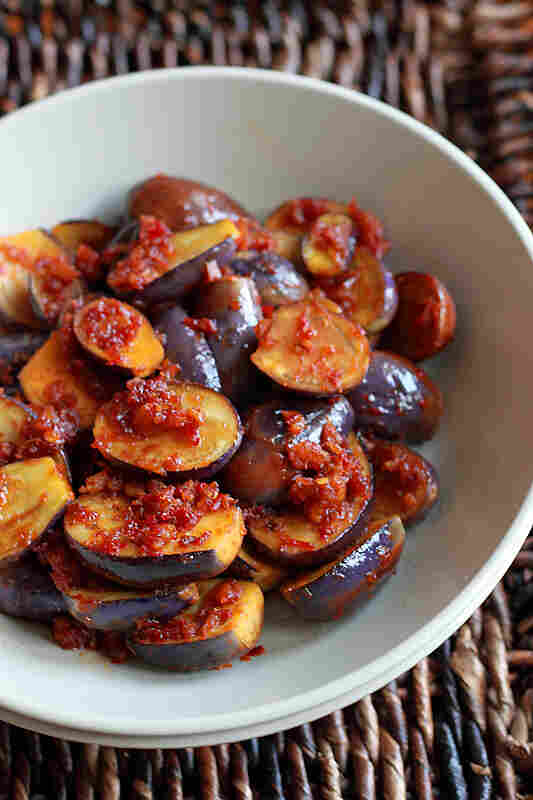 1 1/2 to 2 tablespoons sambal, depending on your heat tolerance (recipe below)

3/4 teaspoon fish sauce*, or to taste

1/4 teaspoon sugar, or to taste

*Available from any Asian grocer

Bee Yinn Low suggests using the easily available red Mexican chilies. This cooked sambal is a paste that can be used to flavor various dishes such as grilled fish, chicken or even boiled eggs (add paste to a hot wok and toss in whole boiled eggs).

Remove the stems from the dried chilies and shake out the seeds (if you like the heat, leave the seeds in.). Soak the chilies in warm water to soften. Drain well.

Peel and coarsely chop the shallots and garlic.

Use a mortar and pestle to pound the chilies, shallots and garlic to a paste, or use a mini food processor to grind well.

Heat the oil in a wok until hot but not smoking. Stir-fry the paste for a few minutes, until you smell the heat from the sambal or the oil separates from the sambal. Remove from the heat and use, or refrigerate in a closed container for future use.

Rinse the eggplant and slice into 1/4-inch slices. Soak in saltwater to prevent turning brown. Separately, soak the shrimp in warm water to remove excess salt and soften them; drain and rinse. Drain the eggplant and pat dry.

Heat the oil in a wok until hot but not smoking. Add the shrimp and sambal and stir-fry until aromatic. Add the eggplant. Continue to stir-fry until the eggplant becomes soft, but not overly soft; don't let it fall apart. I added about a 1/4 cup of water to aid the cooking process here. It took about 10 minutes for the eggplants to soften.

Add the fish sauce and sugar and stir to combine.

This modern twist on a traditional Italian preparation of eggplant is from Chef Victor Casanova of Culina restaurant in Los Angeles. Cinnamon is used to bring out the flavors. 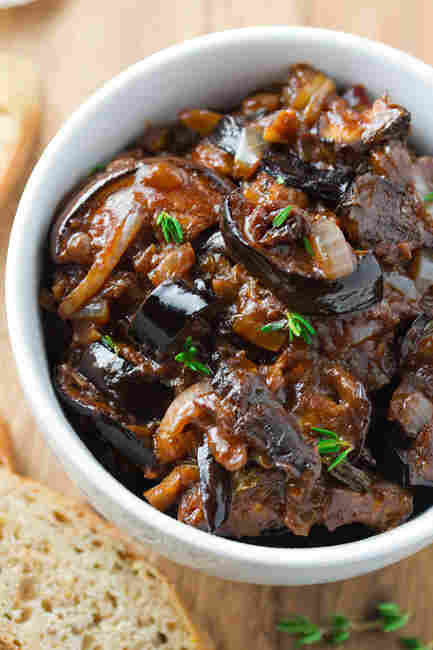 On a large rimmed sheet pan or in a roasting pan, toss the eggplant with a light coating of olive oil. Spread in a single layer and sprinkle lightly with salt. Roast until golden and tender, about 30 minutes. Remove from the oven and let cool.

Heat the olive oil in a large Dutch oven or wide, deep casserole, over medium heat. Add the onions, garlic, pistachios, currants and peperoncini. Cook, stirring occasionally, until the onions and garlic are soft and golden.

Stir in the sugar, cinnamon, cocoa, thyme, tomato sauce and vinegar. Bring to a boil, then lower the heat to a simmer. Stir in the eggplant. Cook for another 10 minutes or so, stirring occasionally, to let the flavors come together.

Cool to room temperature for serving.