Accessibility links
Back in Print: In 'Stuck Rubber Baby,' Civil Rights In Black & White & Gray Howard Cruse's tale of growing up, coming out and (eventually) doing the right thing in the Jim Crow South is an Important book. Happily, it's also a Good one.

Back in Print: In 'Stuck Rubber Baby,' Civil Rights In Black & White & Gray

Back in Print: In 'Stuck Rubber Baby,' Civil Rights In Black & White & Gray 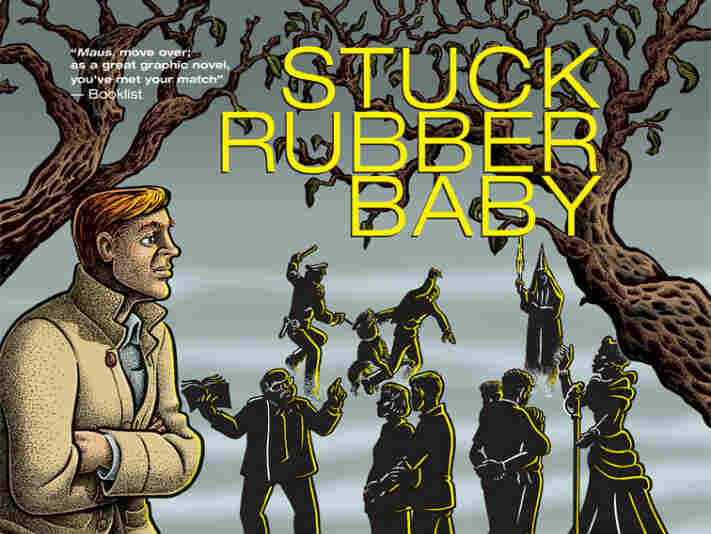 Some books are capital-I Important -- they were, for example, the first to experiment with narrative in such and such a way, or they documented a time of great change, or some aspect of their authors' race, gender, sexuality or class marked them as a particular cultural milestone.

Because we tend to read Important books when they are assigned to us (how many Important books now languish in the formless limbo of 11th grade reading lists?) we approach them differently than others. Important books, we tell ourselves as we steel our spines to dive into their first chapters, have Much to Teach Us. We experience them primarily on that intellectual/analytical/vaguely medicinal level.

But you're an adult now, and it's important you acknowledge something that old Mrs. Vagnoni, as she stood up there in front of the class droning on about An American Tragedy, never could or would, namely this:

There is Important, and there is Good. And they do not tend to hang out at the same barbecues.

A Good book is one that engages your senses, your heart, and, yes, your mind. But it's an immediate, unconsidered experience, a rush of adrenaline that keeps you turning pages hungrily.

Rarely -- all too rarely -- Important and Good come together in a book that both instructs and involves us. When this happens, attention must be paid.

Hey, that reminds me: Howard Cruse's graphic novel Stuck Rubber Baby is back in print. You really should read it.

First published in 1995, Cruse's Stuck Rubber Baby is, the author insists, not autobiographical, though it does feel intensely personal. It's the tale of Toland Polk, a young white man in the Southern town of Clayfield, Alabama (read: Birmingham) who gets caught up in the Civil Rights movement even as he struggles to come to terms with his sexuality.

It's a clear-eyed account of a turbulent time that weaves the personal so deeply and effortlessly into the political that the intellectual scrim of the book's Importance drops away -- even as you admire the skill of Cruse's storytelling, and the tiny, humanizing details he packs into every panel, the simple emotional power of his story itself keeps you reading.

The book snapped up lots of awards back in 1995; it was championed by many in the gay press, who admired its sensitive treatment of coming out, and a few in the comics community, who recognized that Cruse had accomplished something skillful, moving and, yeah, Important.

But critical praise wasn't enough to keep the book in print. My personal copy, which I loaned out to friends over and over again, is now a sorry looking thing -- dog-eared and duct-taped within an inch of its life. So when Vertigo announced it was coming out with a handsome new edition this summer -- featuring a savvy and crisply written introduction by Alison Bechdel -- I was happy.

So was the Washington Post, which reviewed the new edition a few weeks back, and while the review was quite positive, it included one line near the very end that continues to rankle:

"There wasn't a lot of subtlety to the heroism and villainy of the civil rights era in the South, and for that reason comic-strip art may be especially well suited to evoking it."

Gah. And also: Sigh. But no, mostly: Gaaaah.

That single line pretty much dismisses everything Cruse accomplishes in these pages. Because Stuck Rubber Baby is a comic, yes -- a black and white one, appropriately enough -- but it concerns itself with moral, sexual and emotional gray areas.  In so doing, it reveals how effectively, and seemingly effortlessly, the comics form can be used to tell a nuanced, subtle and emotionally complex story.

Cruse' art is all about facial expression and body language. He uses a stippling effect to round his characters' faces and bodies and denote subtle gradations in light and shadow that lend the illustrations a extra richness and dimensionality. His page layouts -- particularly those that feature song lyrics, as many do -- gently nudge your eye across the page, but when you reach the bottom you find yourself going back to admire how Cruse melds disparate elements so that any given page stands alone as an exquisitely composed narrative object.

That, importantly (and Importantly) is something only comics can do.

More to the point: Toland isn't a hero. He's not noble. His strongest conviction is to protect himself, and to that end he says and does stupid, hurtful things. He's perpetually conflicted and confused and passive. In other words, he's a portrait that doesn't often get painted, in accounts of that time and place. Because, for much of the book, he's one of the good men who do nothing, who allow evil to exist.

Yes, eventually he does step up, but in a halting, achingly human way. Cruse is blisteringly honest, here, about our capacity for dithering self-involvement in the face of a giant societal evil.

Because make no mistake, the Klan is an evil straight out of the pulpiest superhero comic -- they even wear masks -- but Cruse spends much, much more ink depicting the casual, reflexive racism that pervades the town, that spills out of the mouths of otherwise "good" characters.

Stuck Rubber Baby is a deft, accomplished and deeply felt account of a very volatile time, but it's also the story of a flawed, confused person working hard to make himself less so.

Mrs. Vagnoni probably wouldn't approve of the language, or the sex, in Stuck Rubber Baby -- but she'd be hard pressed to deny that it's Important.