Accessibility links
Taylor Swift Sings That Kanye Can Get To Heaven Despite Interrupting Her At last night's Video Music Awards, Taylor Swift tried for "soulful forgiveness" and landed on "hopeless self-importance." Kanye West didn't do much better. 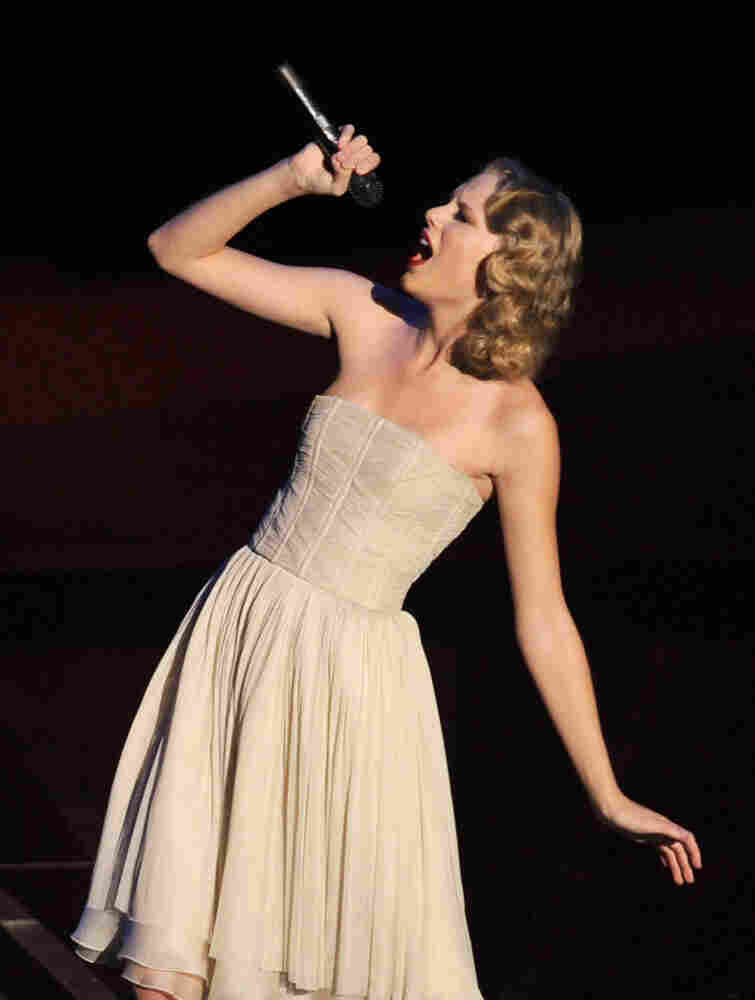 On last night's VMAs, this saga continued as Taylor Swift, previously precariously perched on at least something of a high ground (she was, after all, the one who was cut off in the middle of accepting an award), leaped enthusiastically from that high ground into a morass of overclocked and passive-aggressive self-pity.

Introduced with clips of last year's Kanye moment -- just in case you didn't get the reference, they wanted to make sure to bonk you over the head with it -- Swift launched into an unintentionally uproarious new song, in which she promises Kanye West that his life is not over and he is not morally condemned for all time just because he interrupted her during her speech.

[I'd just like to pause at this point and say to the guy who bumped into me on the Metro the other day: It's all right. Don't hate yourself. Your family still loves you. Probably.]

Swift's song begins from a position of chin-stroking bemusement: "I guess you really did it this time." She then becomes Kanye's therapist, assuming that his interruption of her speech indicates that he's had a difficult time adjusting to adulthood: "Wasn't it easier in your lunchbox days? ... Wasn't it beautiful when you believed in everything and everybody believed in you?"

You know, those glorious halcyon days before you interrupted me?

Fortunately, Taylor Swift then assumes the position of a forgiving angel, social worker, and mistreated but still eagerly loving girlfriend all at once: "It's all right! Just wait and see! Your string of lights is still bright to me."

You know, in spite of the fact that you interrupted me.

That's right. Who you are is not what you did. You are still an innocent in spite of jumping on the stage and saying Beyonce should have won my award. Kanye, I promise, your soul is not entirely deceased and moldering in the ground because of last year's VMAs. The spectacle of an insanely wealthy 20-year-old singer using the phrase "who you are is not what you did" to describe not a reformed criminal or a family member who grievously erred and must be forgiven, but to describe someone she doesn't really know whose only misdeed is rudeness at an awards show is just jaw-droppingly self-involved, and adding "you're still an innocent," with its implications of purity, borders on the creepy. Moreover, this entire attempt to psychoanalyze someone who's essentially a stranger, trying to find the internal pain that leads to every incident of acting out in public, suggests she doesn't yet know how being drunk works.

(She's still an innocent, you see.)

The staging of the number made everything so much worse, with Swift walking around on the stage barefoot in a filmy white dress, like she was slowly dying in a Nicholas Sparks movie, as the words to her song floated in huge print on a screen behind her in case the entire thing was otherwise entirely too subtle for the viewer at home. She told Kanye, "It's okay, life is a tough crowd, 32 and still growin' up now." More, Taylor! more biographical details, in case anyone still doesn't get who this song is about! (At last year's VMAs, Kanye was indeed 32.)

As for Kanye, there had long been talk that he would use his performance closing the VMAs to also address the Taylor Swift incident with something like remorse, although after hearing Swift's song, it honestly wouldn't have been surprising to hear him decide to forget the whole thing. He didn't, though -- he proceeded with his new song about how he's a giant jerk, and here's to him!

It's essentially a different spin on self-pity: poor me, I'm a jerk, I know you hate me, and you're right, I'm terrible. For good or for ill, of course, Kanye West has created some powerful songs in his career, and you can rest assured that you will now see this song used to accompany YouTube video montages of politicians, actors, the New York Yankees or Boston Red Sox depending on what city you are from, and any other ripe target. This song may be dumb, but it's never, ever going away ever again. If you want this song played at your wedding in 20 years, the DJ will have it.

There was a brief moment when the possibility flickered that this was the cleverest scam of all time -- wouldn't it have been great if it turned out you could mash up Swift's hopelessly earnest song of forgiveness and Kanye's hopelessly earnest song of self-flagellation, and she was going to come out on stage, and they were going to perform the funniest, most meta-funny duet ever? Wouldn't that have been utter genius?

Ultimately, Swift and West demonstrated that while they may have come off as adversaries last year, they have a great deal in common. Primarily, they both suffer from a bizarre disorder where what is supposedly intended as a gesture of generosity toward someone else inevitably spins out into a celebration of self. For him, this meant complaining about the pain of being a guy who can't stop acting like a jerk, and for her, it meant blowing up a moment of probably intoxicated rudeness into a major moral failing, just so that she could dramatically offer absolution.

Let's have a toast for the VMAs!