Accessibility links
Preview: 'Survivor' Goes To Nicaragua For Its 'Old Versus Young' Season On the new season of Survivor, the older contestants take on the younger ones, with a special twist in the form of a very, very famous sports figure.

Preview: 'Survivor' Goes To Nicaragua For Its 'Old Versus Young' Season

Preview: 'Survivor' Goes To Nicaragua For Its 'Old Versus Young' Season 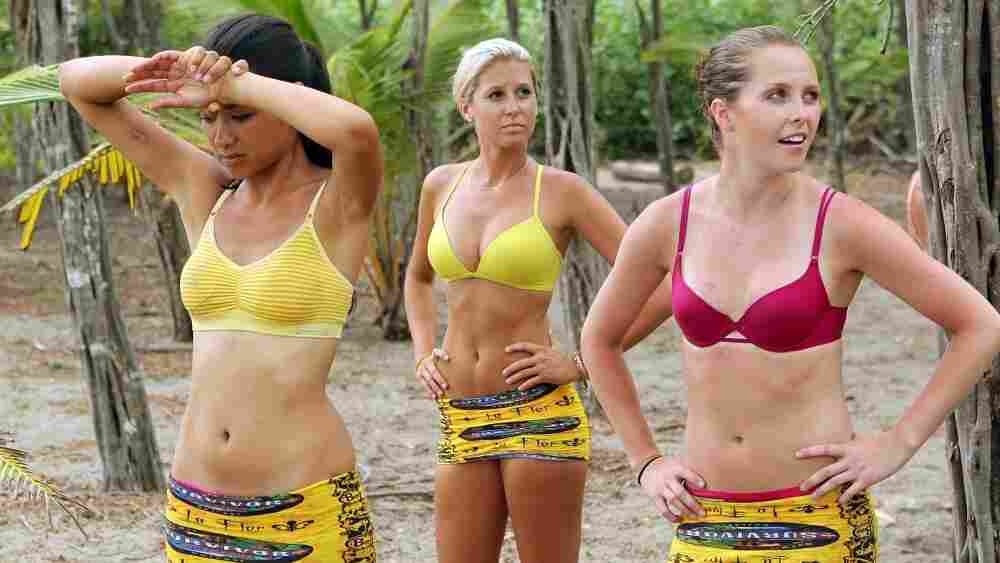 Brenda, Kelly and Alina are three of the "young" contestants on the new season of Survivor. Monty Brinton/CBS hide caption

The 21st season of Survivor -- that's right, they've already done this 20 times -- kicks off tonight on CBS at 8:00. (Yes, tonight. If you're used to seeing it on Thursdays, remember it's been moved to Wednesday to make room for CBS's comedy assault on NBC's Thursday-night block.)

We find ourselves in Nicaragua with a tribe-dividing twist that doesn't seem especially promising, at least in the early going. Granted, splitting the tribes into "old" and "young" seems like a better idea than the time a few years back when they divided the tribes by race. (That turned out to be a great season, but only because that particular dumb gimmick was dispensed with quickly.)

The "old" tribe is startled early on to realize that the group includes legendary NFL coach Jimmy Johnson, who is by leaps and bounds the most famous person ever placed on the show as a contestant. Just as this kind of a casting stunt might make you fear, much of the first episode is consumed by the team's efforts to figure out exactly how they feel about having a very rich and famous person on their team. After all, he's (1) legendary for being a great leader, which could be great for the team, (2) very rich, which means people might not vote for him to win the money, making him a perfect ally to beat at the very end, (3) legendary for being a great leader, which could mean he's too dangerous to keep around, and (4) the oldest guy on the team, who's not in fantastic physical shape and who's showing signs of struggle early. What to do, what to do?

(The closest thing I'll give you to a spoiler -- though it's minor -- is this, so skip to the next paragraph if you don't want to hear it: Johnson tries telling the group that he knows nobody would ever vote for a rich and successful guy to win, so he's just here for the experience, not trying to win. It will be interesting to watch and see whether anyone is quite dumb enough to believe that Jimmy Honkin' Johnson has entered a competition in which he does not care about winning.)

It's not a secret that Survivor's problem at this point is repetition. That's not even entirely the show's fault. There are only so many ways for a group of people to land on a beach and set up camp, and as much as we'd all like to embrace the whole idea that everyone is special and unique -- and thus that every new human interaction places a new footprint in the freshly fallen snow -- the show is only an hour long. That means the glimpses of people early on are even more like caricatures than they will be later.

For now, as always, you have your Unwisely Bossy Blowhard, your Plain-Spoken Older Lady Who Ain't Here To Make No Friends, and your Pretty Girl Who Brags About Her Ability To Manipulate Men And Who Is Hopefully Enjoying These Years In Which She Has Her Looks To Rely Upon.

The premiere of the Nicaragua season feels pretty rote and offers little that's new, in spite of the introduction of the well-publicized Medallion of Power (a name so goofy that even host Jeff Probst makes fun of it). The MoP has its own set of game-altering rules, but it mostly serves as another opportunity for people on this show to do what they always do: strategize badly while bragging that they are strategizing brilliantly. (I'm looking at you, Brenda.)

If I sound weary and ambivalent, it's because I am: This is the part of the season where, if you're a fan of the show, you can rarely tell whether you're looking at a dud or a great ride. Nobody jumps out as lovable, but plenty of them still look agreeable. Every once in a while, a season has a marvelously lively and funny premiere -- the Palau season was like that -- but most of them are like this, comforting and predictable, with little to indicate whether the personalities will click in the right way.

For now, all we know is this: Jeff Probst really loves saying "older tribe" and "younger tribe." I don't know why they even bothered giving them names. If there's such a thing as an age war, Probst is doing his level best to create one.

The copy of the premiere that I screened cut out the very end of tribal council, so I couldn't spoil the first elimination if I wanted to, except to say this: Unless there's a massive surprise apparently unmotivated by almost anything that happens in the episode, the first elimination is so badly telegraphed that critics telling people what happens is the least of the show's problems. The producers would be better off worrying about the fact that even a toddler could tell who's going home before there's any voting at all.