Accessibility links
Poverty Rise Stirs Debate Over Aid Programs Poverty struck an additional 3.8 million Americans in 2009, driving up the number to the highest in decades. Advocates for the poor say millions more were kept out of poverty by stimulus programs, but fiscal conservatives say costly social aid programs haven't solved the problem. 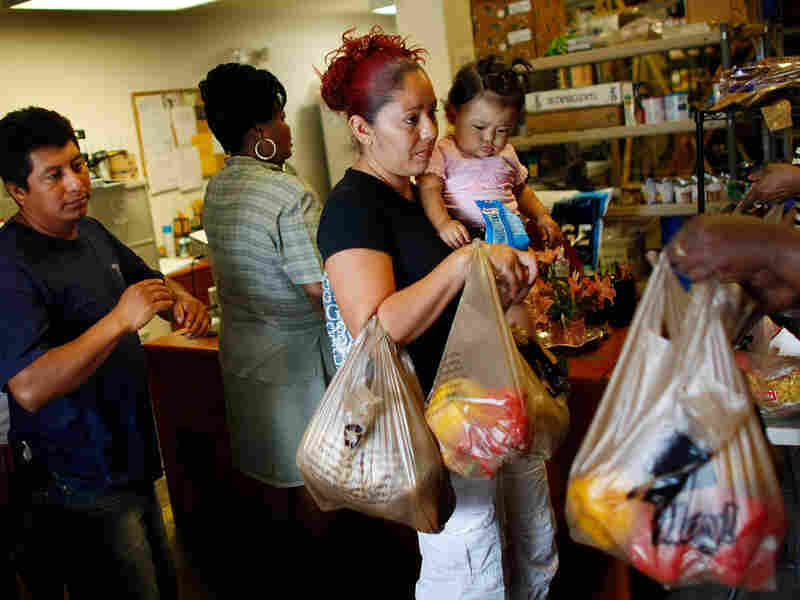 Abran Lopez (left), who was laid off from his job as a landscaper, and Angelina Martinez, who lost her construction job, receive groceries from a food co-op in Fort Lauderdale, Fla., in April 2009. Joe Raedle/Getty Images hide caption 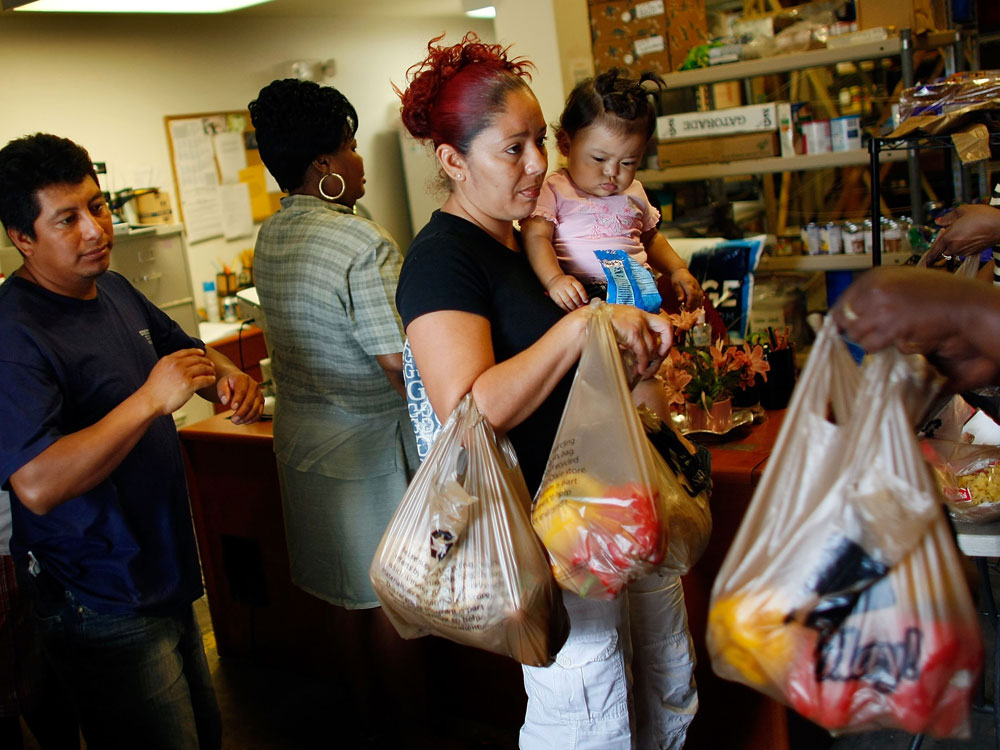 Abran Lopez (left), who was laid off from his job as a landscaper, and Angelina Martinez, who lost her construction job, receive groceries from a food co-op in Fort Lauderdale, Fla., in April 2009.

The recession drove the number of poor Americans in 2009 to its highest total in half a century, yet several measures indicate the impact could well have been worse.

While the Census Bureau's report Thursday on the economic conditions of U.S. households found that 3.8 million more people lived in poverty last year than in 2008, the agency and advocates for the poor say millions of others were sustained with the help of government programs.

Advocates cite federal stimulus initiatives aimed at low-income earners and the extension of unemployment benefits, which alone are credited with helping keep 3.3 million people out of poverty.

Advocacy groups say the results provide a strong argument for continuing these programs not only as social aid but as a proven method for stimulating the economy.

"The thing about these programs is that they target low-income people, and that money goes back into the economy because they are most likely to spend whatever extra money they get," says LaDonna Pavetti of the Center on Budget and Policy Priorities. "And history shows that poverty levels don't go down until unemployment levels go down. So the worst thing that can happen is to end these programs before we're done needing them."

The findings carry political implications for the Nov. 2 congressional elections, which are expected to be a referendum on such economic policies pushed through by President Obama and the Democratic-controlled Congress. 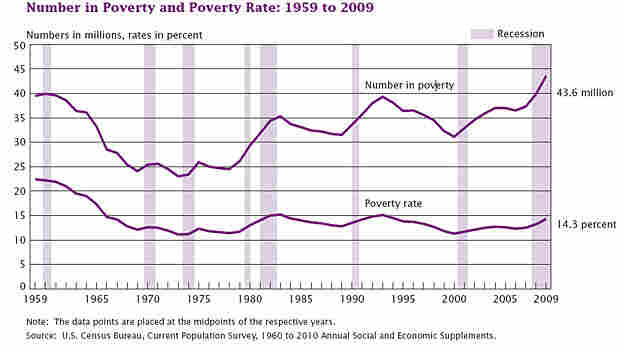 Gaining momentum from voters frustrated about the economy, Republicans have staked their Election Day ambitions on attacking the Democrats' deficit spending.

As part of its counterstrategy, the White House followed the Census Bureau report with a statement claiming credit for helping to mitigate poverty rates.

"The data released today also remind us that a historic recession does not have to translate into historic increases in family economic insecurity," Obama said in the statement. "Because of the Recovery Act and many other programs providing tax relief and income support to a majority of working families — and especially those most in need — millions of Americans were kept out of poverty last year."

"Welfare spending is 13 times bigger than when the war on poverty began, in the 1960s," says Jennifer Marshall of the Heritage Foundation. "Aid to the poor is now the third most expensive government function, and yet we're seeing plans to spend $10.3 trillion over next 10 years. And yet seeing the indicators that poverty continues to go in the wrong direction."

A study released Thursday by the foundation blamed poverty on an increase in single-parent households and entitlement programs that prioritize benefits for unwed parents. The report advocates reducing "anti-marriage penalties" among other initiatives to, as Marshall says, "restore the culture of marriage."

The Recovery Act contained a raft of initiatives aimed at low-income earners such as child tax credits, increased food stamp benefits and emergency block grants issued to states that have helped create about 250,000 subsidized jobs. Advocates are urging the Senate to extend the block grants before they expire on Sept. 30.

Unemployment insurance was more effective against poverty than in past years because Congress improved benefits for the longer-term jobless and approved the $25 weekly increase in jobless benefits temporarily granted by the Recovery Act.

More than 43.6 million people were impoverished in 2009 — or roughly 1 in every 7 — a 1 percent increase from the year earlier and the largest number recorded in 51 years. The 14.3 percent poverty rate is the highest since 1994 and the third consecutive annual increase.

Poverty rates increased among all racial and ethnic groups, except Asians, across all family structures and all geographic regions except in the Northeast. In addition, the number of uninsured rose.

Given the soaring unemployment rates over the past 16 or so months, most analysts projected poverty rates as high as 15 percent. Many of them also had forecast a decline in median household income, but the Census Bureau said it remained statistically flat, at $49,777.

The report also notes a large increase of people who coped with misfortune by bunking with relatives, or "doubling up." For these households, the poverty rate was 17 percent, but it doesn't capture the dire financial conditions of individuals who moved in with family members to save money.

"If you counted the people who moved in — who needed the help — their own poverty level would have been 44.2 percent," said Timothy M. Smeeding, director of the Institute for Poverty Research at the University of Wisconsin.

Smeeding found a particularly dramatic increase in poverty among people ages 25 to 34 who moved in with parents or other relatives. "For those households," he says, "the poverty rate was 8.5 percent. But if young adults' income is taken separately, their poverty rate would have been 42.8 percent. That's an important group."