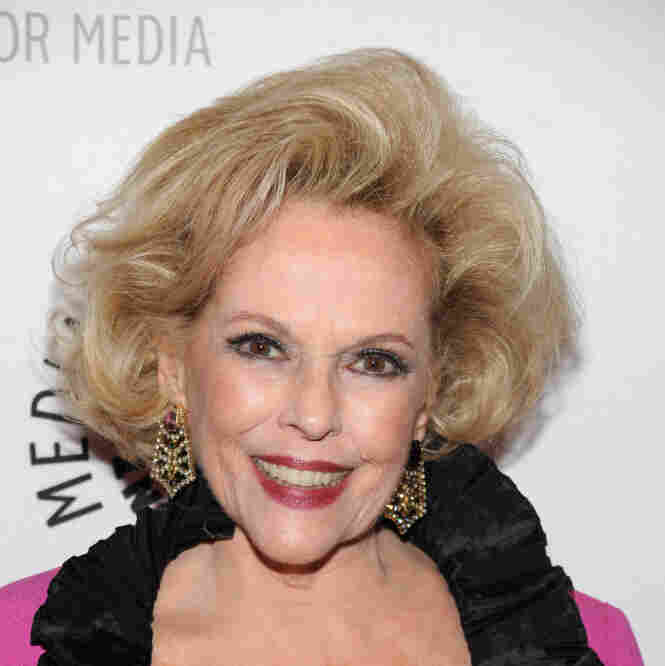 Actress Eileen Fulton attends a farewell to cast of "As The World Turns" at The Paley Center for Media on August 18, 2010 in New York City. Bryan Bedder/Getty Images North America hide caption

The one and only time I ever acted was in my sixth grade production of Oliver! I was proud to have gotten the part of Nancy. I learned my lines, practiced my songs. But the whole school burst into applause when Bill Sykes beat me to death. So much for Nancy’s tragic end.

When I was assigned to do a story on the finale of As the World Turns, something told me it was time to revisit my nascent theatrical skills. After 54 years, the show that was my guilty pleasure had been cancelled. Sure, I could author yet another piece about the death of the soap opera as a genre, but I'd literally been watching ATWT since before I was born. Wouldn't it be more fun to have a go at fantasy, to try and reach the actors where they live, to meet them on creative terms for my own peace of mind and a sense of closure? Well, at least fun for me.

Eileen Fulton, who played the role of Lisa on ATWT for fifty years, proved amenable to acting out a little scene I’d created. Thankfully, one of us was a true professional. Fulton got her start back in the day at The Neighborhood Playhouse in New York with acting guru Sandy Meisner. Her character became so wildly successful on ATWT that she was the first soap actress to need her own publicist.

Once I’d gotten over the fact that she wasn’t actually Lisa – the resident busy-body in the fictional town of Oakdale and a woman who changed husbands like she changed shoes – I asked her for some acting tips. And she told me what it was like bringing Lisa into the world and playing her during over the years. Sometimes, it turns out, it’s a good thing when your audience hates you.

How did you figure out who Lisa was as a character? I had a lot of experience being conniving as a minister’s daughter. I found the people in my daddy’s church fascinating. When I went up for Lisa, she was just a nice girl next door. And just for the summer, for Bob’s interest. I didn’t want to play anything so close to myself. So I decided to just give her a background. I thought about where her family came from. I thought about what she really wanted. And I thought amazing thoughts when I did those scenes. I didn’t change their lines – not yet, because I knew better – but I certainly had other ideas about what I’d like to do with that Bob. And it read.

When you watch those old scenes, you can tell that she’s always thinking, that she’s up to something. And I think it’s fair to say that she was a bit of a gold-digger. My goodness, yes! She wanted to be a doctor’s wife, live in a beautiful house with a picket fence and roses, and be respected in the community. That was one of the images. You can’t act that, but I could act how I wanted to get him.

How did people react to the character? They hated her—and I thought it was fabulous.  I was standing in front of Lord & Taylor. I’d only been on the show a few weeks. And this beautifully dressed woman in a Channel suit – in the days before there were knockoffs – came up to me and said, “Aren’t you Lisa?” And I said “Yes, that’s the part I play.” And she said, “Well, I hate you!” And she hit me! And people looked at me like I was rotten and this woman was a heroine. But I thought, you know what? I’ve reached them. Then a telegram came into the studio. It said, “If that bitch Lisa marries Bob I’ll never watch As the World Turns again.” That is how the character was truly locked in.

I have to ask you about the rumors regarding your Granny clause. In the 1970s they grew up my son really quick. He was going to be married to Carol. I was in a hot story line with Dr. Shea. And I realized that if my son got married, I would be a grandmother. I remembered seeing Barbara Berjer, who played Claire Cassen. They grew up her daughter and granddaughter and a lot of people. Here she is looking so beautiful and suddenly they realized, my God, she’s going to be a great grandmother on our show. We have to kill her. So they hit her with a truck. I thought: Wait a minute. That is not going to happen to me.

As luck would have it, I have an angel who said, "Don’t sign your contract just yet." And I called up [creator and writer] Irna Phillips and said, “So if Tom and Carol have a baby, that makes me a grandmother. “ She said, “Yes, dear. That’s the way soaps are. It’s like life.” And I said, “Well, I have a contract here and I haven’t signed it. And I’m not going to sign it until you put in a grandma clause saying that Tom and Carol will not—.” So as time went on, poor Carol was sterile and we called her sterile Carol. Then Tom married Natalie and she couldn’t have any babies either because she had some kind of disease. So she died.

Later on, in the 80s, Lisa was certainly old enough to be a grandmother, though she’s having all of these wild affairs. When Tom and Margo were going to have a baby, Greg Marks who was playing Tom wanted to leave and go back to California. So they had them lose the baby in a gunfight. It was awful. And people still remembered I had a grandma clause. I got hate mail from everywhere saying you son of a — and bleep, bleep, we’re going to kill you. Not just one letter—letters from everywhere.

They blamed you for her miscarriage. It was just a foam rubber pillow. So I had to have a bodyguard. It was really bad because it didn’t come from just one place. They said, we know where you work. We’re going to fix it so you’ll never act again. And I lived in Connecticut at the time, so I was alone—except for the bodyguard and my dogs. I had three at the time: Sarah Bernhardt, Sir Lawrence Olivier and Simone Signoret.

For those of us who only know Lisa and not Eileen, where does Lisa end and Eileen begin? We’re very different in our beginnings. When Lisa was really conniving, scheming, nymphomaniacal, people would come to church to hear Daddy, and the women would come up to mother and say, did you see what your daughter did on Friday with Bruce the shoe salesman? Mother said, "That was not my daughter; that was Lisa." And that was good. Lisa was created. I could make her do anything I wanted. And I could make her own background, so I didn’t have to depend on anyone else writing a background for me. Her dreams, her ideals were certainly totally different from Eileen Fulton. She depended on men to do this, that, and the other thing—and to make her rich. Believe me, that’s not how I am. I create. I believe in setting goals, and going after it, and getting it. But as the years have gone on, there’s more of a melding.

Well, the world was a different place when Lisa came into it. You were a working professional, although the character you were creating was struggling with her place in the world as a woman. I think that’s why think so many people named their children Lisa. I was very surprised when I went on the road years ago to find this out. It was the beginning of feminism—women taking up for themselves and going out into the world. Lisa became a businesswoman. She stuck up for herself. She was not somebody to be trampled on.