Investigating Bias On The Bench

Investigating Bias On The Bench 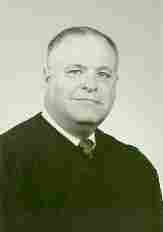 Mark and Vergil Richardson were charged in 2009 with manufacturing a controlled substance, intent to distribute and organized crime. Several questions surrounded their case, including the validity of a search warrant used to enter their home and arrest them.

The attorney general's office was prepared to dismiss the cases, but Judge John Miller set a trial date and appointed a new prosecutor to the case. In October 2010, a new judge assigned to the case dismissed the charges against the Richardsons, whose civil rights lawsuit against the Red River County district attorney, the sheriff and the chief of police begins in January 2011.

On Aug. 23, 2010, a hearing was held to have Miller recused from the Richardsons' case. The Richardsons' attorney for their civil rights lawsuit, Mark Lesher, called witnesses in an attempt to demonstrate that the judge was biased against his clients. After hearing the evidence, Judge John McCraw agreed, and ordered Miller recused.

The following are excerpts from the recusal hearing, according to the court's transcript:

Testimony from Clyde Lee, the Richardsons' attorney on the drug case

Lesher: First of all, did Judge Miller make an off-the-cuff remark, so to speak, to you before you were ever even involved in representing Vergil Richardson?

Lee: Yes, sir. I don't -- it was -- I don't know whether it was directed to me specifically or to the lawyers that were just standing in front of him, but --

Lesher: Now, where was this?

Lee: This was in open court, actually before any of the public was in the courtroom. The lawyers were milling around...He [Miller] stated that the basketball coach from over here in Texarkana was caught with a bunch of drugs on the table in a house with a bunch of other guys...It was just a remark that he made to people in general.

Lesher: All right. ...did you then have an extended conversation between yourself and Judge Miller on November 30th of '09 at the Bowie courthouse in New Boston?

Lesher: Tell us the substance of that conversation.

Lee: The Judge suggested to me that he was concerned about those cases. That he'd felt like there was more to it than what had been presented. That he knew that if -- to put it succinctly, he knew that if Vergil would end his civil rights lawsuit, the prospects of his dismissal getting signed were high.

Lesher: He suggested that to you?

Lee: He suggested I tell Vergil that.

Lesher: He suggested that you go to Vergil and tell him that information?

Lee: I told him exactly what the Judge said.

Lesher: Tell us what you told him.

Lee: I told Vergil that I had had a discussion with Judge Miller in which Judge Miller was concerned that there was more to Vergil's case and his brother's case than met the eye and that he would be more inclined to sign the dismissal on the criminal end if the civil rights lawsuit didn't exist.

Lesher: How did you take that, Mr. Lee?

Lee: I was uncomfortable with the whole situation. In fact, my first response to Judge Miller, when he suggested it, was that I didn't have anything to do with the civil case and had no control over whether it would go forward or not.

Lesher: But, did he indicate that you need to bring that to the attention of your client, Vergil Richardson?

Lee: He said that I should talk to Vergil.

McCraw: And the Attorney General is taking the position there's insufficient evidence...

McCraw: The status of the case that's set for the 13th, the Attorney General would be announcing ready or not ready? Or what --

Tanner: The Attorney General would be announcing not ready.

McCraw: Because you found no additional evidence to indicate that the case should go forward?

Lesher: You Honor, I've never filed a motion to recuse before. Usually those matters take care of themselves. Usually judges, if they feel like some -- one party does not want them to be involved, they're more than happy to step aside.

In this case, Judge Miller has persisted in being convinced that these folks are guilty of something; possession, organized crime, whatever...

You've got uncontroverted testimony from Mr. Lee as to the involvement of Judge Miller and his quid pro quo, suggesting that the civil rights case be dismissed in exchange for these motions to dismiss being executed...

Lee: Every turn has suggested that he refuses to consider that [their innocence is] a possibility...

Tanner: ...based upon the testimony that's been provided by the Defense, that we cannot dispute and do not dispute, we cannot oppose their motion [for recusal].

McCraw: The Court will grant the motion to recuse and sign an order upon presentation and report to Judge Ovard the action I've taken. He will be appointing another judge to preside on these cases.