Accessibility links
'Mad Men' Plays Fair As It Lets All Its Precarious Towers Shake For Real Last night's episode of the stellar Mad Men began to pay off the show's underlying promise -- the one that insists you can't make something ugly look pretty forever. 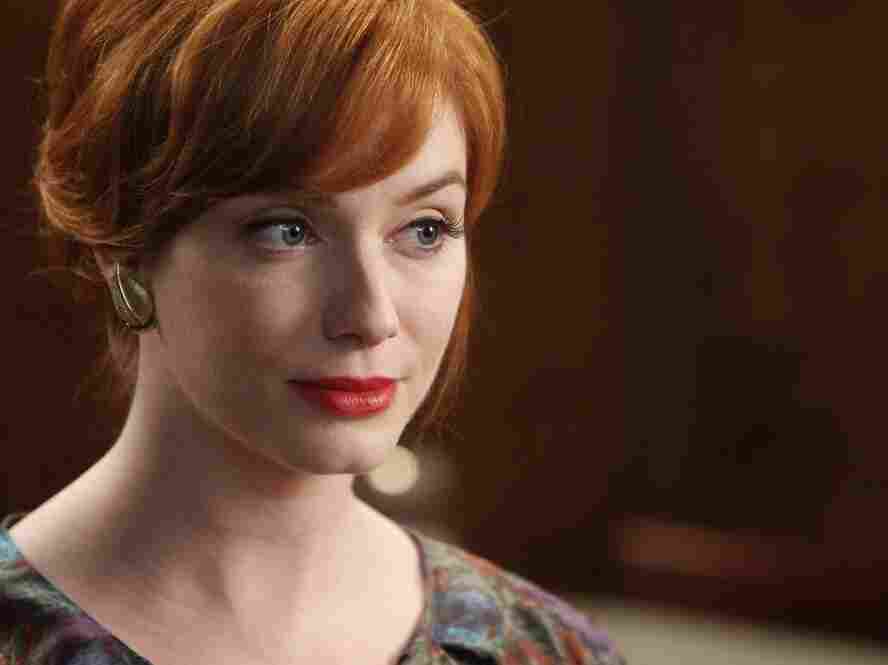 Joan (Christina Hendricks) was only one of several characters who saw their situations begin to become seriously tenuous on last night's Mad Men. AMC hide caption

Mad Men has always been a show about the contrast between the beauty of illusions and the ugliness of the truth. That's what makes its stunning aesthetics relevant to the narrative rather than just nice to look at. Why did all the dark wood at the old Sterling Cooper offices matter? Why does the sight of Joan, with her perfect hair and her bright dresses, sculpted by her clothes, break your heart? Why do Don's impossibly chic sunglasses underline his loneliness? Because it's about how easy it is for a certain kind of person to achieve the appearance of beauty and how hard it is to achieve actual beauty.

The show has, from the beginning, been about how much tension you can place on one of these enormously precarious lies before the illusion can't be maintained. And the risk of that, in terms of the story, is that the show will become all hat and no cattle -- tension and tension and tension, and then nothing. The risk has been that it would become so enamored of scenes in which characters say one thing and mean another and walk away with the sense that they have just barely skirted any consequences that essentially, nothing would ever happen. And that's why last night's episode was so important.

The title, "Hands And Knees," is a brilliant choice, because it tells you exactly where we are. The illusions are not dead yet -- Don's entire charade, the viability of Sterling Cooper Draper Pryce when it's entirely too reliant on Lucky Strike, Joan's marriage, Betty's marriage, Sally's faith in her father, Roger's professed affection for Joan, Lane's life in America -- but they are on hands and knees. There's no more soldiering on without damage. These are the consequences; they are arriving right now. Now is when the fractures turn into obvious, undeniable breaks, whether or not the pieces are still more or less where they belong.

It's not that there have never been consequences before. When Don was found out by Betty and cornered in last season's "The Gypsy And The Hobo," he came clean with her. He told her because he had to, because she already knew, and because, yes, he was tired of the deception. But after that, he wound up largely in a situation he could have been in anyway: divorced. Remember, Betty was already flirting with Henry Francis long before she found out about Don's massive lies; it was only the last step in the deterioration of their relationship. Don was clearly shaken, but he set out determined to build another existence for a new, single-man version of Don Draper. Betty didn't tell.

There have always been people who have known his secret. Pete knows. Bert Cooper knows. Even having Betty know has been manageable, to a point. The risk now is that the government will find out -- people who don't have any connection to him. People with no possible reason not to bust him. Betty had her own reasons to keep it to herself; the government does not. Don's already had his family fall apart, but this presents the risk of the entire illusion collapsing.

But his panic attack isn't just about being arrested. It's about the fact that his stress at seeing the men he was afraid were coming for him is added to the many years he's spent with that spring in his belly that's coiled so tightly. He's spent years being afraid of being caught, and he's spent years with no real way to let that tension out -- except with Anna, who provided a bridge between his two lives and kept the psychological wolf away from the door.

With her gone, the breakdown has accelerated, and he's now so frayed and so raw that he easily gives up to Faye a secret it took him years and years to share with Betty. Contrasting those two scenes -- how low-drama his confession to Faye turned out to be. compared to how enormously fraught his confession to Betty was -- tells you how different the relationships (obviously) are, and how different those women are, but it also tells you where the guy is right now. There's not much stiffness left in his resolve. He pulls it together to beg Pete to take the fall for him, but what kind of a solution is that? What is Pete going to expect in return? Who wants to be this deeply in debt to Pete Campbell?

Meanwhile, it's been clear from the beginning of the season that the new agency was hanging by an agonizingly thin thread. We already knew Lee Garner was an utter weasel; having the agency fully dependent on Lucky Strike was a disaster waiting to happen. Which it finally did. Roger has 30 days to save the agency, and maybe he'll pull a rabbit out of his hat and maybe he won't, but the cost of relying entirely on Lucky Strike -- the cost defined as "in the event Lucky Strike pulls out, you cannot continue, short of a miracle" -- is upon him.

It's not the only thing, either. Roger and Joan's relationship has always been, if nothing else, very warm. She has seemed to be his only true friend, in addition to the only woman he actually respects, as far as we know. He, in turn, has always been her One Who Got Away, and even though she married Greg and he married Jane, it would be silly to be entirely surprised that they briefly turned back to each other after the scary experience of being mugged. It's not like they weren't kind of looking for a reason. Even though they were both cheating on their spouses, the close of last week's episode suggested that they were still seeing it as a nice moment. Something sweet, even if wrong.

But an unplanned pregnancy will really take the poignant sweetness out of a dalliance in a hurry, as they learned this week. Roger tried to be caring, but only within entirely self-interested bounds. She could keep the baby -- but of course, he'd never have anything to do with it. He was going to take care of everything -- in the sense of paying for the abortion. Like all the other nice things in Joan's life, her relationship with Roger proved to be about a half-inch deep, and it was clear how much that hurt her.

How about Lane Pryce? Lane Pryce is a manager. That's his genius; he manages. And now, he's being manhandled by his own father -- literally manhandled, literally beaten into submission. It's been clear at other times that he wasn't quite as in control as he'd like to think he is -- witness his night out with Don earlier in the season -- but this is where he finally unravels. He somehow convinces himself that his father, who has come to collect him and take him back to England, is going to accept and like his Playboy bunny girlfriend, and what he gets is a cane to the head. Where does a man go from there?

And then there's Pete. Pete worked, as he said, for three years to land an account he's now had to scuttle and then take the fall for. He's been able to look powerful in this agency. He's been able to be an equal. He's been working to earn respect, and now he's been left so bereft of options that he wound up slitting his own professional throat because he, like the agency itself, is too reliant on something unreliable. For the agency, it's Lucky Strike. For Pete, it's Don.

Even for Betty, things are beginning to fray. After her fond look at Don playing with Gene, her equally fond reaction to his taking Sally to see The Beatles, and the continuing ice factor in her relationship with Henry, it looks like Betty hasn't gotten away with quite the cleanly righteous indignation she wanted to take with her.

But maybe no single gesture in the episode did as brilliant a job of showing just how tenuous everything is in the Mad Men universe as the master stroke of having Don promise Sally the Beatles at Shea Stadium, and then revealing after the fact that he didn't have the tickets in hand. He was relying on Harry to get them for him.

Who could possibly watch that scene and not imagine what was going to transpire? Don doesn't get the tickets. Sally hates him. Betty hates him. He's alienated again. The only genuine moment of happiness he sees in the entire episode depends on something that's completely out of his hands. He doesn't get the tickets, and he loses that moment. Of course, in the end, the tickets arrive, but the point is already made: the disaster that awaits if there are no tickets appears in those early scenes with Don like a phantom, and even if it recedes when Meagan turns over the envelope, its presence is still palpable.

It's true that these stories have been brought together to meet in a knot of crises, where they're all coming to a head together, and where the illusions are cracking at the same time. But it seems like it's entirely being done fairly; none of these crises seem artificially accelerated. The table has been laid since at least the beginning of the season for them to meet at this point; for everyone to be sitting at that table at the same time, with everything falling apart.

This has to happen. Things have to break. It wouldn't fair to suggest that everything can remain shaky forever without anything happening. Not all of these illusions are going to go away. Some will rebound. Probably Joan's marriage. Maybe the agency, when Roger gets through with it. Maybe Lane's self-image. Not everything is going to fully break apart. But when the story is about beauty being false, the ugliness has to bubble up from time to time, or the threats to that beauty begin to feel ineffectual.