Accessibility links
The Tea Party's Tension: Religion's Role In Politics The Tea Party's strategy is to stay focused on fiscal issues rather than take a stance on social or religious issues. But that strategy could alienate many of its supporters who identify themselves as Christian conservatives. 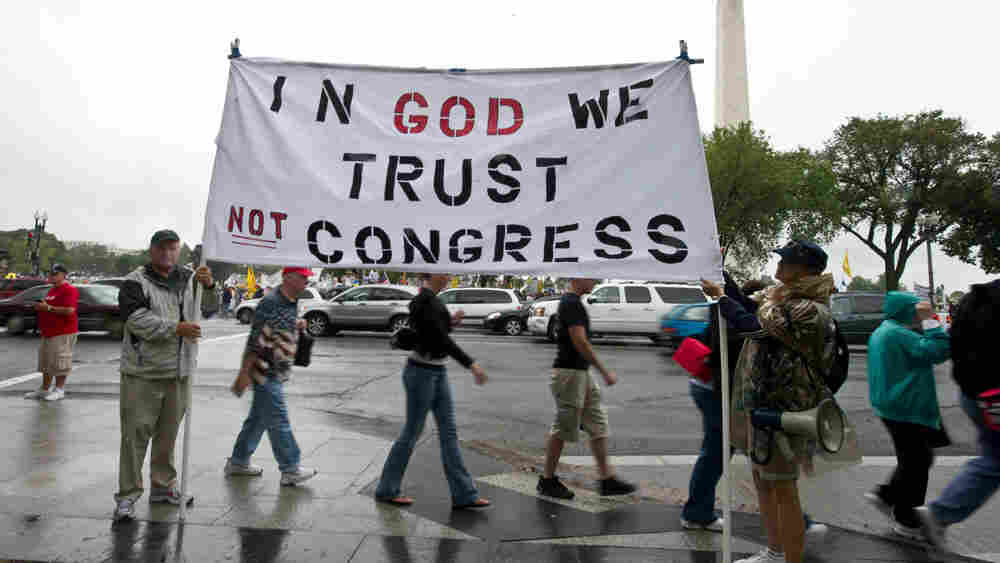 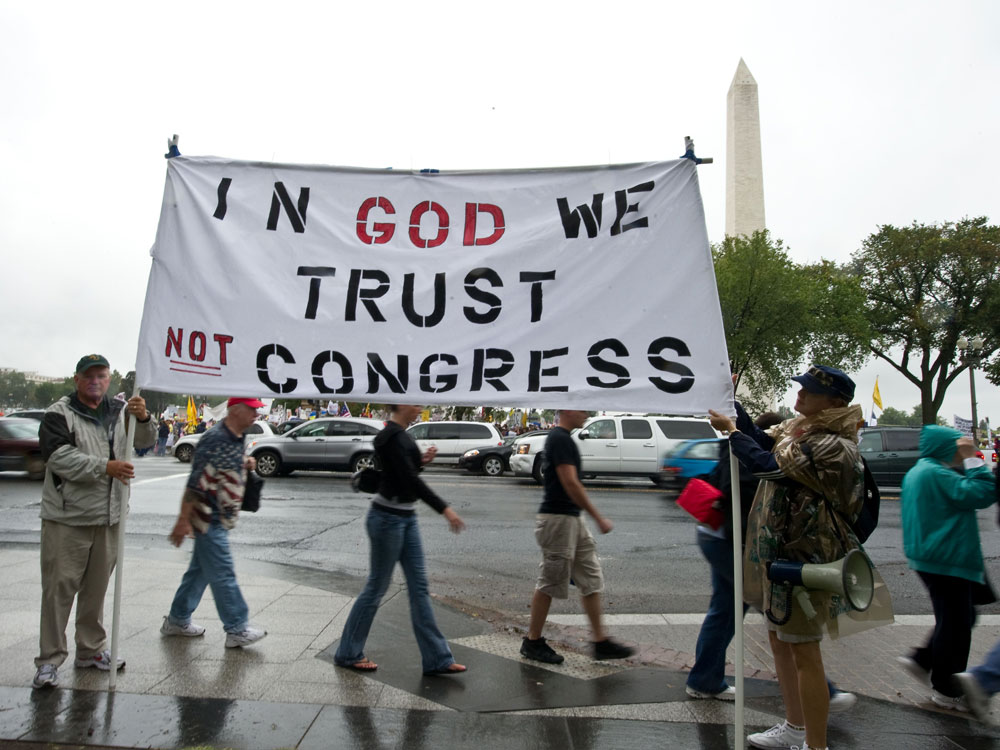 Tea Party supporters hold a sign showing their religious leanings during a march in Washington, D.C., on Sept. 12.

At the Mad Fox Brewery in Falls Church, Va., it's happy hour, which pretty much captures the mood of the two dozen middle-class conservatives who are reveling in their surprising political success.

These members of the Northern Virginia Tea Party fall silent as Jonathan Moseley takes the microphone.

"I bring you news from the front of the Tea Party revolution, from the battle of Delaware," he begins dramatically. For an hour, Moseley, who was Christine O'Donnell's campaign manager in 2008, describes O'Donnell's upset victory in Delaware's Senate primary.

O'Donnell is a conservative Christian. But no one mentions that at this meet-and-greet, in part because people here don't all agree about religion's role in politics.

On the one end of the spectrum, Stacey Hagga says that religion and socially conservative issues are simply not a factor in the Tea Party movement.

"I personally don't know the last time I was at church," she says, shifting her toddler from one hip to the other. "I think people are just generally concerned about the economy and the direction of our country. I have my 2-year-old here and I'm just concerned about his future."

Nearby, Sandy Smith, a registered nurse, sees some religious undercurrents to the Tea Party movement. 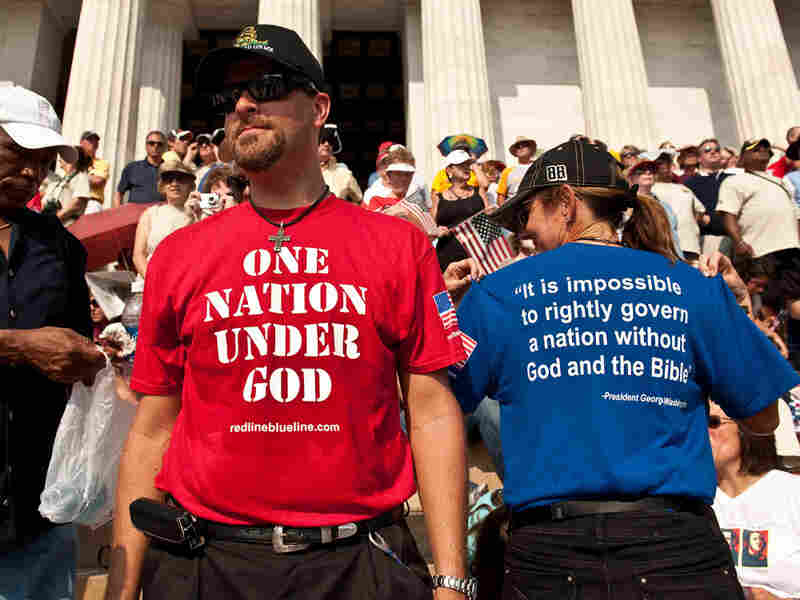 People gather at a rally in Washington, D.C., organized by conservative Fox News commentator Glenn Beck, one of the de facto leaders of the Tea Party movement. While the Tea Party says it doesn't take a stance on religious and social issues, many of its supporters are conservative Christians. Nicholas Kamm/AFP/Getty Images hide caption 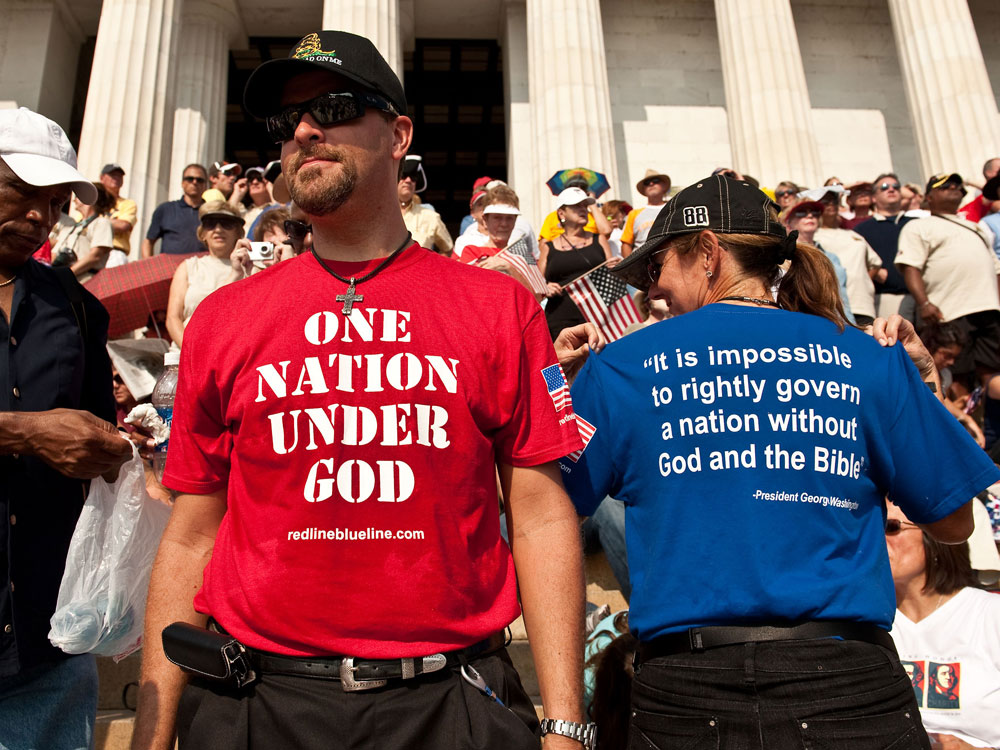 People gather at a rally in Washington, D.C., organized by conservative Fox News commentator Glenn Beck, one of the de facto leaders of the Tea Party movement. While the Tea Party says it doesn't take a stance on religious and social issues, many of its supporters are conservative Christians.

Smith is describing a "civil religion" that seems to appeal to many Tea Partiers: the idea that America was a divine experiment, that the Founding Fathers were Christian men who created a nation on biblical principles. She says America in 2010 has lost that.

"That's what started this whole downfall of America — taking God out of everything, and political correctness," Smith says. "We were founded on Judeo-Christian principles, and its like 'What's happened? Why aren't we fighting to save that?' They fought hard for that so why aren't we? So we're out here trying to fight for those principles."

And then there's Michael Giere, a mortgage banker and evangelical Christian. "We are a Judeo-Christian country, and I don't care who says we're not, we obviously are," he says.

Giere says religious conservatives are the sleeping giant in the Tea Party.

Polls show that Tea Party members are far more likely to be weekly churchgoers and conservative Christians than the population as a whole.

That is what Wendy Wright, president of the evangelical Concerned Women for America, has found. And she says she believes the Tea Party is prompting Americans to look closely at their religious heritage — in particular, at the faith and early writings of the Founding Fathers.

An August poll of nearly 800 Tea Party supporters revealed that a larger percentage than the general U.S. either "agreed" or "strongly agreed" that they were white evangelical Christians.

"It's an opportunity for evangelicals to show how biblical principles are integral to America's foundation," she says. "And if we strip out those principles — if we ignore them or turn our back on them — that our foundation can't survive and therefore our country can't survive."

The most prominent proponent of this nostalgia for the early days of the Republic is Glenn Beck. At an August rally, more than 80,000 people gathered on Washington's Mall and listened with rapt attention as the Fox News commentator whipped up a religious revival.

"Something beyond imagination is happening," he boomed to the roars of the crowd. "Something that is beyond man is happening. America today begins to turn back to God!"

That moment marked a turning point in the relationship between religious conservatives and the Tea Party, says Bryan Fischer of the American Family Association. "There was a spiritual energy there that we haven't seen in typical Tea Party events," he says. "And my word to the Tea Party leadership is: Sit up and take notice. This is a winning issue for you, just from a purely strategic, pragmatic standpoint, to capture the spiritual energy of the American people."

For their part, religious conservatives have benefited hugely from the rise of the Tea Party. John Green, a political scientist at the University of Akron, says that evangelicals and conservative Catholics were dispirited after the 2008 election. They were disillusioned by what they saw as President Bush's unfulfilled promises and a disappointing Republican presidential candidate. At the same time, once-powerful organizations such as the Christian Coalition have petered out. Enter the Tea Party movement.

"There was an opening on the right for organizations and candidates and groups that could appeal to different elements of the religious coalition," he says. "In many ways the Tea Party has filled that niche."

Green says in this year's primary elections, religious conservatives have gotten exactly what they wanted.

"If you look at many of the candidates around the country that have won Republican primaries that are identified with the Tea Party, many of them hold very conservative views on social issues and therefore are likely to appeal to conservative Christians as well as other kinds of conservatives," he says.

Christine O'Donnell, for example, has spent much of her career as an evangelical activist. In fact, every Tea Party candidate who won his or her Senate primary opposes abortion.

The Glue That Holds The Tea Party Together: Fiscal Issues

And yet, there's still tension between these two groups. For example, Fischer recently interviewed Amy Kremer, chairman of the Tea Party Express, on his nationwide radio program. Fischer told her that evangelicals want some signal that the Tea Party movement supports their views on abortion and marriage.

"Can we hear that message from the Tea Party leadership?" he asked.

"You're not going to hear it from me," she responded. "I'm sorry, I'm going to disappoint you."

In an interview, Kremer explains that the Tea Party movement is a big tent, including not just religious people but atheists and libertarians.

"As long as we stay focused on the fiscal issues, that's the glue that holds us together," she says. "If we start delving into the religious aspect or social aspect, that's when we're going to become divided and when people are going to disagree."

But Fischer says this strategy could alienate Christian conservatives.

"And if they begin to discover that the leadership of the Tea Party movement isn't going to fight for them on those issues, then I think they're going to lose their enthusiasm for movement," he says. "And they'll go back to being disengaged or they'll invest in that energy in some other direction."

It appears that these groups are mostly patching over their differences. But the question is: After the election, could their diverging priorities lead to the breakup of this political marriage?