Accessibility links
Entrepreneur's Local Partnerships Help Kids Play Well over half the kids in this country don't have easy access to a community playground. That bothered Darell Hammond so much, he started an organization to create places for children to play. So far, over nearly 15 years, the group has helped build more than 1,800 playgrounds. 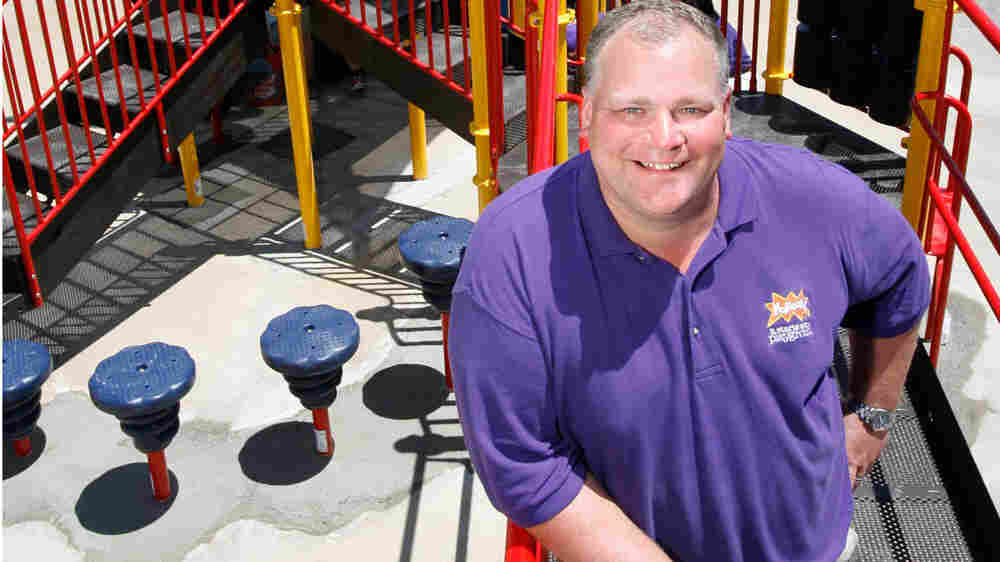 Darell Hammond says he founded KaBOOM! after reading a news story about the death of two children who suffocated while playing in an abandoned car; they had no neighborhood playground. Courtesy of KaBOOM! hide caption 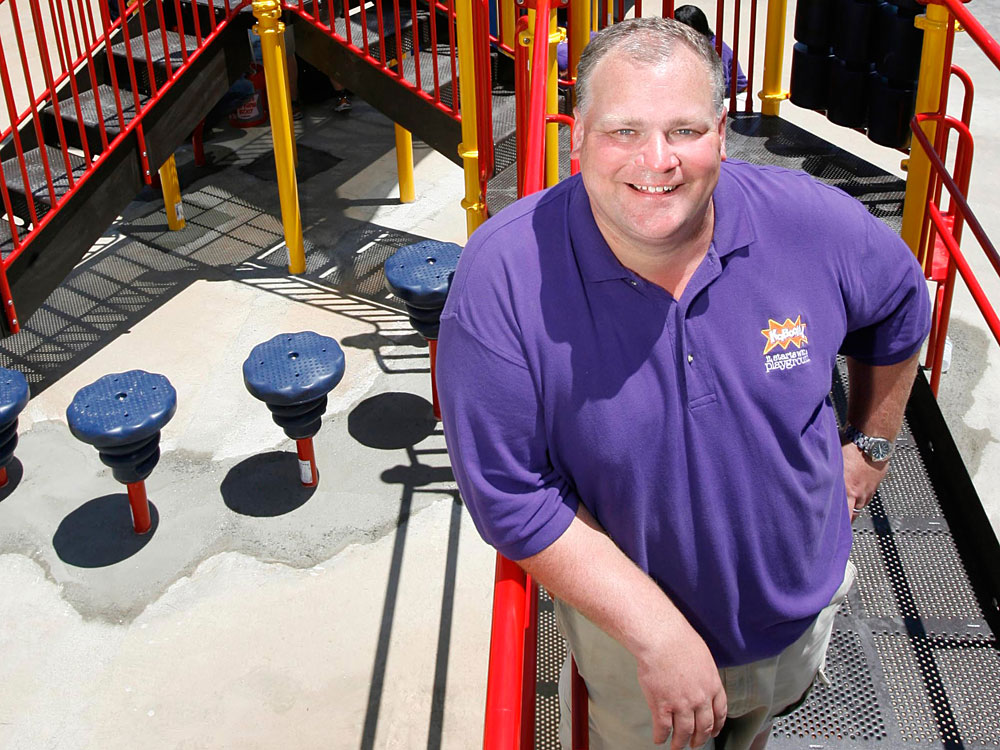 Darell Hammond says he founded KaBOOM! after reading a news story about the death of two children who suffocated while playing in an abandoned car; they had no neighborhood playground.

Part of an occasional series on social entrepreneurs

Well over half the kids in this country don't have easy access to a community playground. That bothered Darell Hammond so much, he started an organization to create places for children to play. So far, over nearly 15 years, the group has helped build more than 1,800 playgrounds.

The group is called KaBOOM! — why is obvious once you see the magical explosion erupting on a patch of asphalt behind a charter school in Philadelphia.

In a space of just a few hours one day last June, about 100 untrained volunteers, led by Hammond, KaBOOM's founder, turned a grim piece of asphalt into a bright, shining playground. 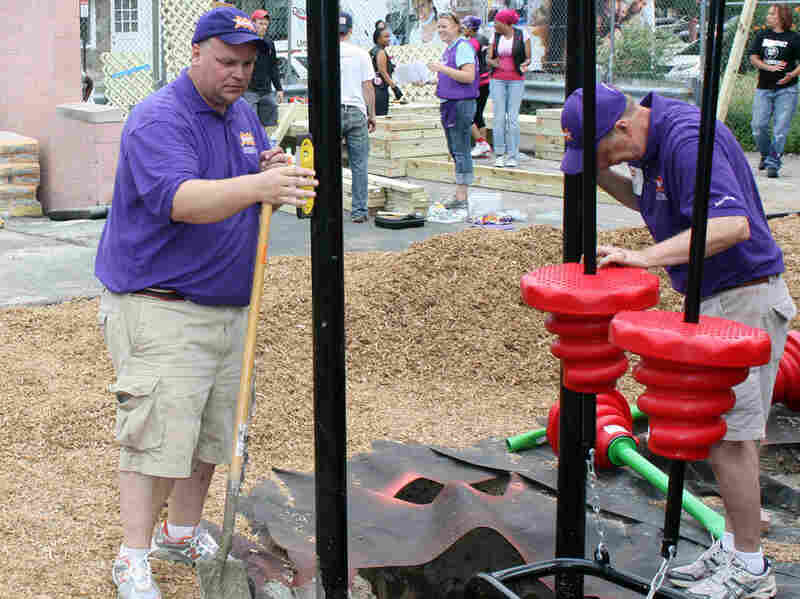 Hammond makes sure supports for a new playground are straight. His organization, KaBOOM!, has built more than 1,800 playgrounds. Larry Abramson/NPR hide caption

In the middle of the hubbub at the Imani Education Circle Charter School in the Germantown neighborhood of Philadelphia, Hammond shouts encouragement and tries to keep things moving.

"C'mon guys, c'mon. Jump in there, and help him out!" he calls out. Hammond is in his own version of heaven here: up to his ankles in wood chips, and sweat dripping from his forehead.

The school could never have paid for this alone, but Hammond says the playground is not a gift. He says KaBOOM! supplies 85 percent of the cash while the school must put up 15 percent. The Imani school must get the site ready, and it must take care of the playground once it's built. "Because what we've found through our experience is that when they put their own capital into it, they care about it, they maintain it, they're invested in it," Hammond says.

Investment and capital — these are terms you hear a lot from social entrepreneurs like Hammond. They are taking terms from the world of finance and applying them to all kinds of social problems.

Volunteers at the budding playground are running back and forth, carrying wheelbarrows full of mulch and screwing together long metal bars that will soon form the framework of the play structure. It looks chaotic, but everything is carefully choreographed. Music pumps all day to keep the energy high. Professionals prepare the site and do any heavy equipment work before the volunteers arrive. Bags of concrete, food and water are carefully staged. Even if some of the volunteers don't show up, this structure needs to be finished in a day.

Key to KaBOOM!'s strategy is the idea of building partnerships — with big corporate sponsors like Home Depot, which has been a major donor for many years, or through spontaneous friendships like the half-dozen people at the playground site from The Dead Broke Rydaz, a bike, car and social club. Two of the Dead Broke Rydaz have kids in the school, and others are here because the group has a rule: You have to give back to the community.

Many of these people say they've never been part of anything like this. They're using tools and mixing concrete for the first time. And many are giddy about how quickly the whole thing is coming together. 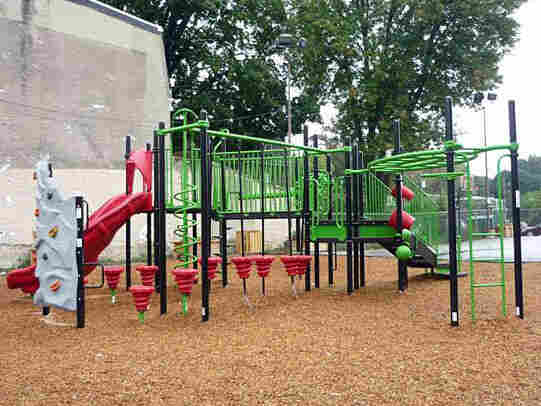 Some who have helped build playgrounds with KaBOOM! say the experience has changed them.

Bruce Bowman got involved with KaBOOM! when he was an executive with the ice cream company Ben and Jerry's. Now, he works with KaBOOM! full time. "I'd be willing to bet that a year from now, somebody from this build is out there doing a project somewhere on their own," Bowman says. "It may not be building a playground, but they will have caught this volunteer spirit and go out and do other projects."

The build moves forward relentlessly. At the beginning of the day, workers faced a mammoth pile of mulch that looked like it would take a bulldozer to move. But one wheelbarrow at a time, they move it across the yard. Within a few hours, it has been transformed into a soft carpet at the base of the structure.

Before you know it, it's all over. A professional contractor checks each nut and bolt to make sure they're tight. The group of sweaty, happy volunteers gathers for a group photo and a ribbon cutting. They all sport broad grins. "One, two, three, KaBOOM!" they all holler.

KaBOOM! hopes other groups will mimic the system it has developed. The group shares its strategies for raising money and for wrangling large groups of volunteers. Its chief evangelist is Hammond himself, who overcame a lot when he was a kid.

"I'm the seventh of eight kids. My father left my mother. After trying to care for us as best as she could for two years, we became wards of the court and went to a group home called Mooseheart outside Chicago, Illinois," he says. Hammond tells that story often. Recently, he told it again to a class at the University of the District of Columbia that is studying different models of social entrepreneurship.

Hammond speaks warmly about growing up in a group home and about the playgrounds he had there. He says other kids should have at least a playground even if they have little else.

"And all the things may not be solved out of it, but we'll at least be able to look back at the things we did do, when we did something together," he says.

A few months later, the playground in Philadelphia's Germantown neighborhood stands in the bright sun of a September afternoon. School has started again, and before kids hit the books, they hit the play structure.

This week, KaBOOM! plans to build playground number 1,870 in Atlanta.