Accessibility links
'The Social Network' Is A Great Movie, But Don't Overload The Allegory It's tempting to make 'The Social Network' stand in for a variety of important social questions. But really, it's a story about a couple of kids who were great friends who were torn apart by ambition and money -- more an old story than a new one. 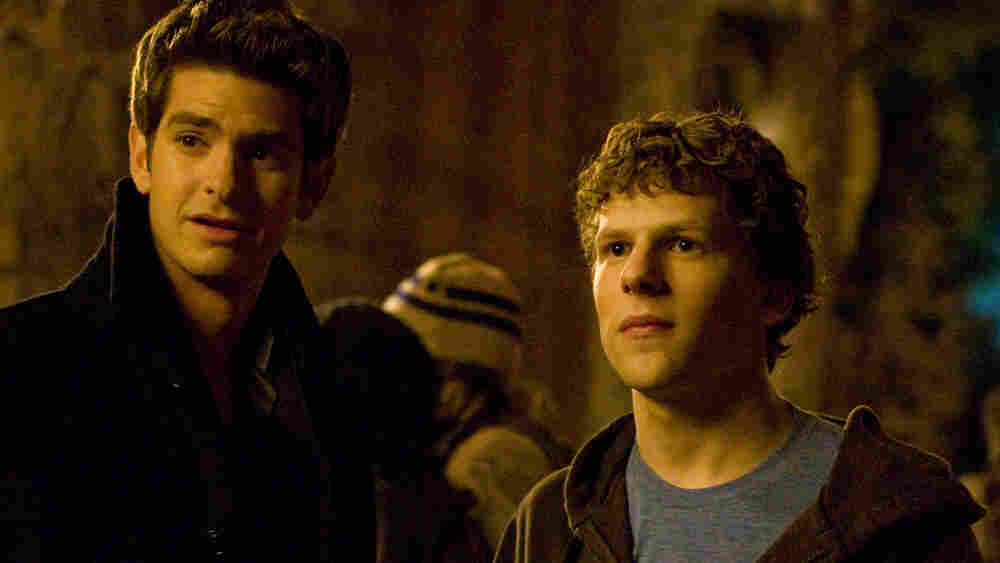 Eduardo Saverin, played by Andrew Garfield,  and Mark Zuckerberg (Jesse Eisenberg) are the characters for whom you should see The Social Network. Merrick Morton/Columbia Pictures hide caption 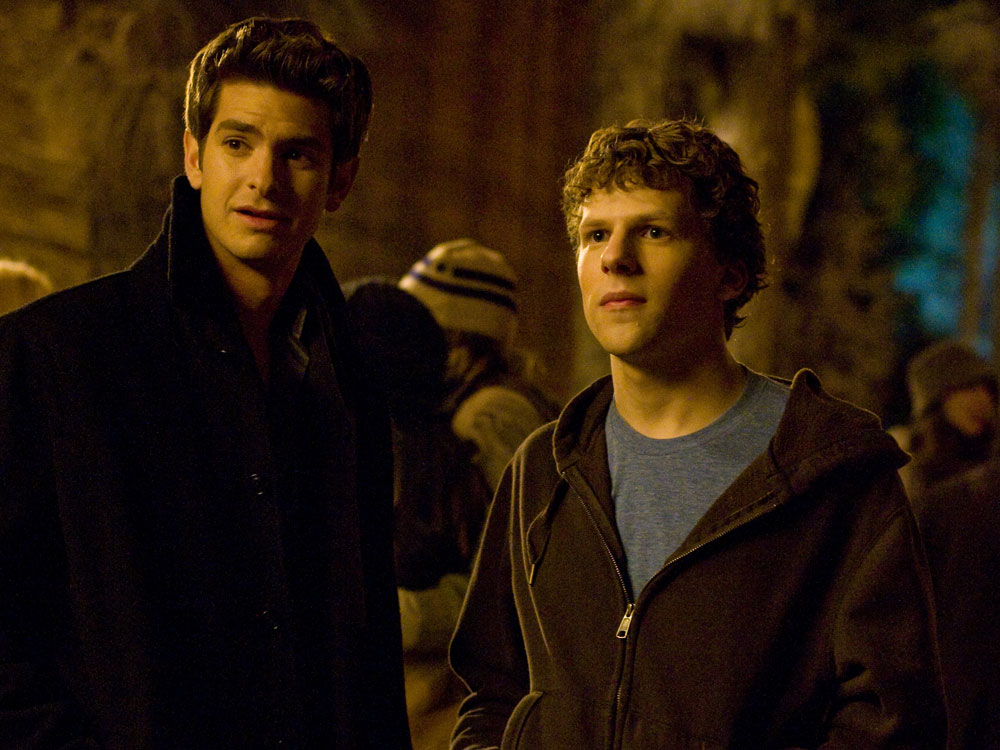 Eduardo Saverin, played by Andrew Garfield,  and Mark Zuckerberg (Jesse Eisenberg) are the characters for whom you should see The Social Network.

It's very tempting to make The Social Network, a movie about the creation of Facebook, into a movie that defines some sort of "Facebook generation" -- despite the fact that some research suggests that 61 percent of Facebook users are 35 or older. Some of its many positive reviews credit it for exploring "the changing face of social interaction," or saying that it's "about the nation of narcissists we've become, reshaping who we are on Facebook."

My sense is that this is more weight than the film can hold: What do the wretched social skills of founder Mark Zuckerberg, as portrayed in the film, mean about Facebook and people who use Facebook and the Internet and the future and why don't people just lean over the fence and talk anymore, anyway? Behold how The Social Network indicts social networks!

Whatever you think about this kind of social criticism, it's not really what The Social Network is about.

It's true that Zuckerberg (and from here on out, I refer to the movie Zuckerberg, who may or may not be the same as the real-life Zuckerberg) wants to create Facebook and make it a success partly because he wants attention and wants to fit in. It is sort of neatly ironic. But one gets the sense that he would have been just as happy to create something that had nothing to do with social connections at all.

It's handy to think, "Ah, yes, Facebook was created by an antisocial guy with no friends, which demonstrates how hollow social networks are," but it doesn't hold water, particularly. Zuckerberg doesn't choose social networking because he himself wants to use it as a substitute for human contact. He's just trying to give the people what they want, just like he would if he were inventing a video game or a gadget unrelated to socializing. This is a tale of a small business, essentially, that quickly expanded into an enormous business far more rapidly than the two friends at its heart were prepared to handle.

Ultimately, The Social Network satisfies not as a broad social allegory but as a character story, brilliantly written by Aaron Sorkin (whose sparkling, hypnotically musical dialogue is at its best) and brilliantly acted by, in particular, Jesse Eisenberg and Andrew Garfield. The relationship between Zuckerberg and his friend (and later legal adversary) Eduardo Saverin is its own gripping tale; it doesn't require the two to be standing in for some sort of grander argument about the nature of society or how human connection has or has not suffered.

It's surprising, in fact, that the portrayal of Zuckerberg is widely considered to be unrelentingly scathing, because it contains far more complexity than that. Wisely, the film doesn't specifically offer a very precise theory of how Saverin came to be pushed out (that's what causes the lawsuit). Certainly, the entrance of Sean Parker (Justin Timberlake) is presented as sinister and his meddling is the instigating force. But what Zuckerberg knew and when he knew it, and to what degree his sin was participation and to what degree it was inaction, are matters left in the hands of Eisenberg to suggest with his performance.

(One example of the subtlety at work: Roger Ebert walked away with the sense that Zuckerberg didn't even really realize that Saverin was being pushed out. I did not.)

The Zuckerberg we see here is not a monster or a malevolent villain; he's a very young guy who desperately needs better guidance, who's seduced by people who promise him attention and a feeling of importance. He's arrogant; he's rude. He wants greatness. But that's not a quality unique to the Facebook "generation." The need to be accepted is a tragic flaw far older than that.

The Social Network isn't about an entire nation of narcissists; it's about two young men whose friendship is quite tragically broken by ambition and ego and hurt feelings. Go for a riveting personal story, not for a lecture about social media.