Accessibility links
Midnight Shopping On The Brink Of Poverty On the last day of every month, low-income families descend on many Walmarts to stock up on necessities. That's because it's when their food stamps and government checks kick in. Retailers take note and stock their shelves accordingly with larger packs of items. 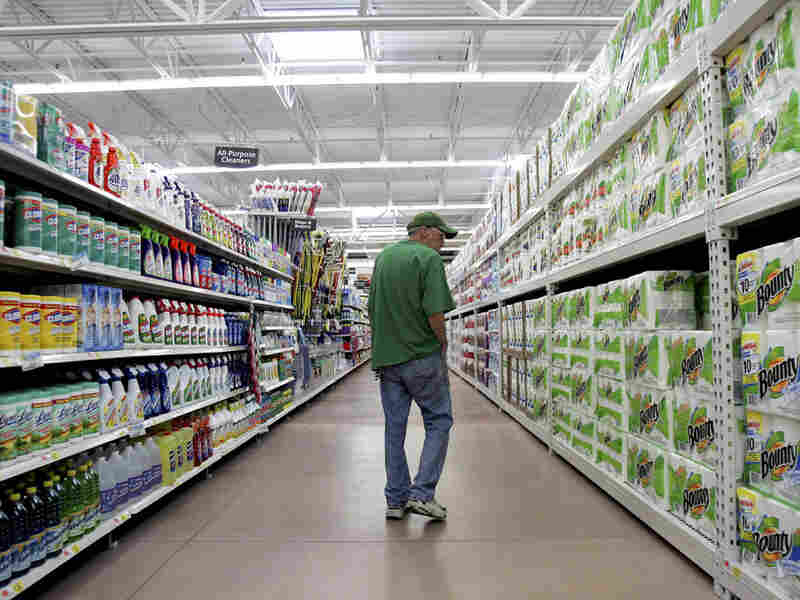 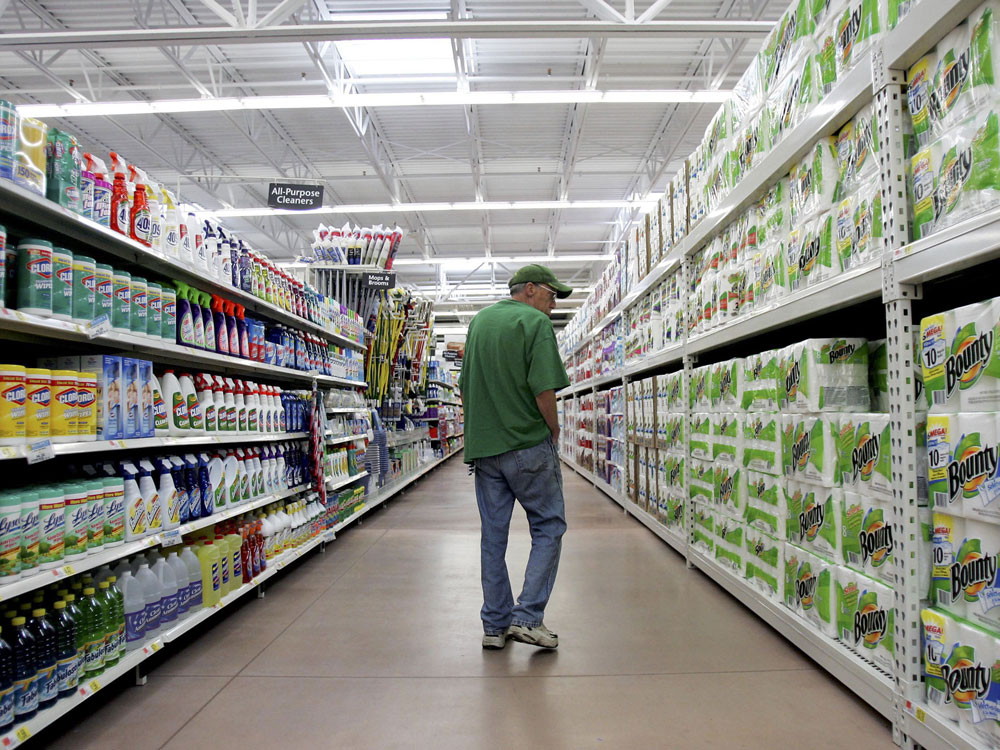 A man looks over items at a new Walmart Supercenter store in Bowling Green, Ohio.

Take a trip to one of those 24-hour Walmarts on the last day of every month, and you'll get a glimpse into the lives of low-income families trying to get by. At one location in Fredericksburg, Va., at around 11 p.m., families start to load up on necessities like diapers and groceries.

People like Tracy and Martin Young live nearby, and for the pair in their early 30s, it's a chance to shop quietly without their five children, two of whom are teenagers. Each is pushing a shopping cart overflowing with food. There's mac and cheese, bags of cereal and cans of evaporated milk. Most of this has to last for the whole month.

Despite torrential rain outside and flash-flood warnings across the area, the couple arrives to shop. Tracy Young says they've been doing this midnight run on the last day of every month for so long now that they're on a first-name basis with Gloria, their cashier.

Child Hunger, As Seen At Walmart

"It's been about a year. We used to go to Bloom, and then we found out we were saving more coming here," Tracy Young says. At a stroke or two after midnight they begin unloading their carts at the checkout. Tracy says they set aside $500 for groceries a month. With five kids, the money they get never lasts until the next monthly check.

That's why they're here at midnight: It's when their food stamps and government checks for their 3-year-old daughter kick in on the first of every month.

Tracy works in retail and Martin works two jobs. One of those is as a waiter at a fast-food chain, so their monthly income goes up and down all the time. Tracy says all their income goes to groceries, the rent and the bills, and hardly anything is left over.

That's not unusual, says Heidi Shierholz, a labor economist at the Economic Policy Institute. "There's no question that there's going to be more people living paycheck to paycheck now," she says, adding that more and more families are living on the brink of poverty. 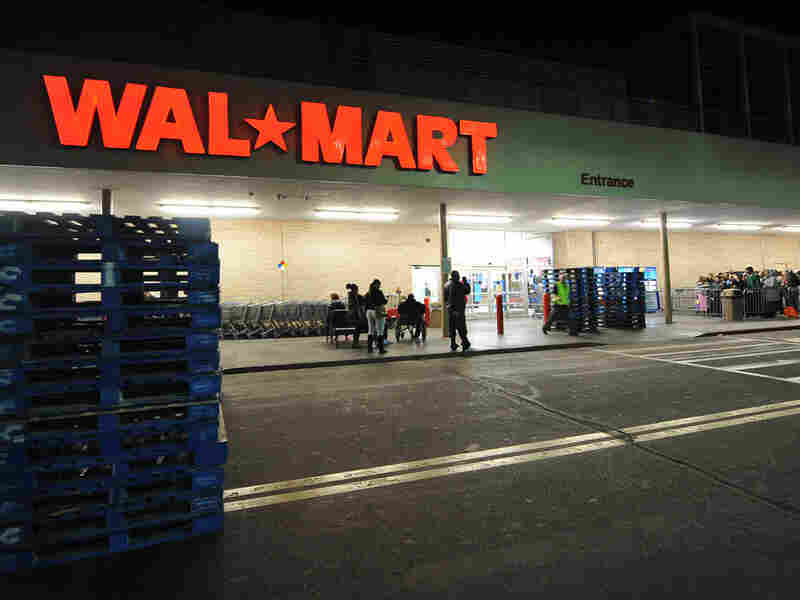 Low-income families stock up at Walmart on the first of the month when they have food stamps in hand. Robyn Beck/AFP/Getty Images hide caption 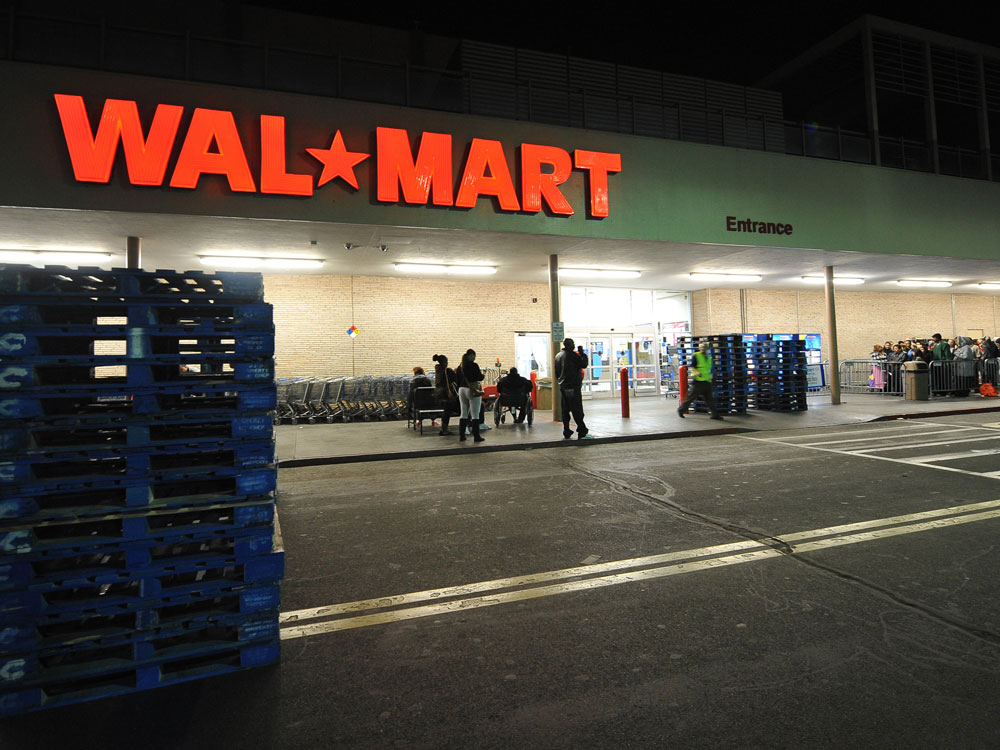 Low-income families stock up at Walmart on the first of the month when they have food stamps in hand.

"They see wages get cut or not grow at all, so family incomes suffer, and when they take a hit some fall down" below the poverty line, she says.

Last year, 3.7 million Americans joined those already living in poverty, meaning families of four living on just under $22,000. That's 14 percent of the population. The government says the price of food has risen in the past year: Eggs cost 44 percent more and milk is up 21 percent, mainly because of fuel prices.

Shelf-Stocking Patterns For The First Of Every Month

Wal-Mart noticed that sales were spiking on the first of every month. In a recent conference call with investment analysts, Wal-Mart executive Bill Simon said these midnight shoppers provide a snapshot of the American economy today.

"And if you really think about it," Simon said, "the only reason somebody gets out and buys baby formula is they need it and they've been waiting for it. Otherwise, we're open 24 hours, come at 5 a.m., come at 7 a.m., come at 10 a.m. But if you're there at midnight you're there for a reason."

And so Wal-Mart has changed its stocking pattern. It brings out larger packs of items in the beginning of the month, and smaller sizes toward the end. It makes sure shelves have plenty of diapers and formula.

"It's definitely an indicator in terms of people who are struggling," says Charles Fishman, journalist and author of The Wal-Mart Effect. "That tells you there's a large swath of America that is still very carefully calculating how much money is available and how they're spending it on even the most basic things like diapers and milk and bread. That's not the sign of an economy that's shaken off the recession."

Checking Out Under Budget

At the checkout, Tracy and Martin Young see the total. It's $485.49. And they're under budget. Martin Young says they'll use the extra $60 to buy more canned vegetables from another store.

Tracy says their children know when the end of the month is approaching, because what they like to eat is gone and the kitchen shelves have emptied. The children are all home asleep while the parents are out shopping.

In the morning, Tracy says, they'll wake up and be able to have what they want for breakfast.