Accessibility links
FBI Targets Peace Activists For Alleged Terrorism Support More than a dozen peace activists in the Midwest were subjected to search warrants searching for "evidence relating to activities concerning the material support of terrorism." 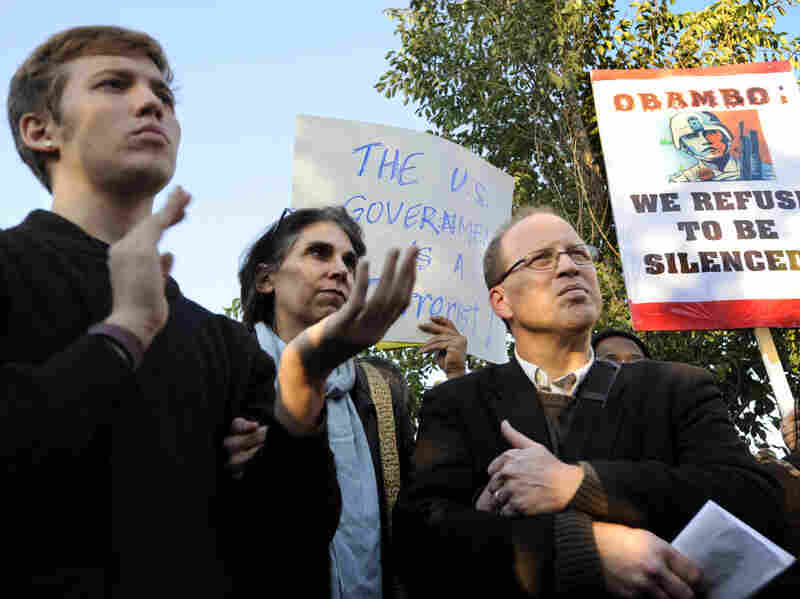 The home of anti-war activists (from right) Joe Iosbaker, his wife, Stephanie Weiner, and their son, Tre Iosbaker, was searched by the FBI, under a warrant issued by the Joint Terrorism Task Force. On Monday, the family joined a protest outside FBI headquarters in Chicago. Paul Beaty/AP hide caption

More than a dozen peace activists in the Midwest will face a federal grand jury in Chicago in the next few weeks, in an investigation related to terrorism.

The FBI searched the activists' homes last week, confiscating computers, photographs and other materials that the search warrants suggest could be evidence of "material support" of terrorist organizations. None of those whose homes were searched have been charged but they have been subpoenaed to appear before a federal grand jury in Chicago.

One activist, Joe Iosbaker, says that before 7 a.m. last Friday, he heard a loud, sharp knock on the door of his Chicago home. "When I came down the stairs, there were, I don't know, 7, 8, 10 agents standing on our front porch," he says. "And I thought they were Jehovah's Witnesses. And I opened the door — and they showed me a search warrant."

Iosbaker, a labor organizer, says the agents came in and started searching the house, every inch of it.

Iosbaker's wife, Stephanie Weiner, says as many as 25 agents came through their house throughout the day, searching and removing items for 10 hours. "The house was turned upside-down, tip-to-toe, to such an extent that boxes from the '70s and '80s in our attic were brought down and looked through," she says.

Weiner, a community college teacher, says the agents went through their teenage sons' belongings, including notebooks and posters. They even inspected the words and designs on their T-shirts.

"It was a shocker. Um, we were stunned," she says. "I think I have to say we've suffered through a trauma."

At first, the couple was perplexed about why they were being singled out. But as the day went on, they realized they weren't the only ones to have been targeted.

Another home was being searched in Chicago, belonging to the executive director of the Arab American Action Network. And in Minneapolis-St. Paul, six more homes of anti-war activists were searched, along with the offices of the Minnesota Anti-War Committee. An anti-war activist in North Carolina says his home was searched by the FBI last Friday, too.

The search warrants were issued by the Joint Terrorism Task Force and signed by a federal judge. They sought "evidence relating to activities concerning the material support of terrorism."

Investigators appear to be looking for links between the activists and overseas groups the government classifies as terrorist organizations. The groups include the Revolutionary Armed Forces of Colombia, the Popular Front for the Liberation of Palestine — and in at least a couple of cases, Hezbollah.

Iosbaker and Weiner say they've spoken out against U.S. foreign policy in Latin America and the Middle East, but they deny they've done anything that can be construed as "material" support for those groups.

Weiner calls the searches an attack on a political movement.

"It was truly to intimidate, to divide, to silence and separate the movement," she says.

After the searches, hundreds of anti-war activists protested outside the FBI's field headquarters in Minneapolis, Chicago and other cities, to denounce what they contend is an effort to squash free speech against U.S. policy.

"The FBI investigates allegations of violations of federal criminal law," he says. "We do not investigate any person or group because of their political persuasion or beliefs, and we support and defend the right of every citizen to peaceably assemble and protest."

Rice and the U.S. attorney's office in Chicago would add only that this is an ongoing criminal investigation, and no arrests have been made.

Several of those subpoenaed are to appear before a federal grand jury in the coming weeks, starting next Tuesday.