Accessibility links
Few Answers Forthcoming In Albuquerque Homicides It has been more than 1 1/2 years since the skeletal remains of 11 women were discovered buried in shallow graves on a mesa in Albuquerque, N.M. Some of the victims' families say police and the media haven't paid enough attention to the killings. 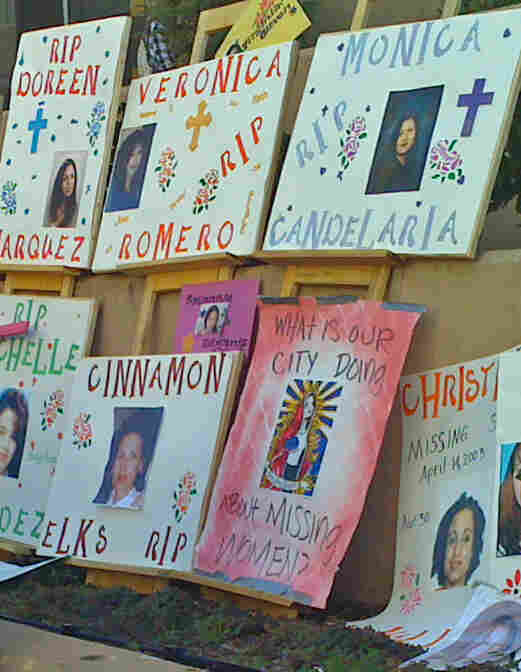 Memorials to the women found buried on the the West Mesa at a recent demonstration in front of police headquarters in Albuquerque, N.M. Laura Paskus hide caption

It has been more than 1 1/2 years since the skeletal remains of 11 women were discovered buried in shallow graves on a mesa in Albuquerque, N.M. Some of the victims' families say police and the media haven't paid enough attention to the killings.

A local protest band called the Raging Grannies headlined a demonstration on a recent Saturday morning in front of police headquarters in downtown Albuquerque.

Brightly colored women's dresses tied to pink crosses fluttered above the 80 or so people who showed up. Demonstrators called for police to step up their investigation into who killed nearly a dozen women in the city.

"What p - - - - - me off the most is apathy," said Donna Roe, director of a local youth advocacy organization. "It's killing the people we love, the people I've worked with."

To understand this story we have to go back a few years.

In the summer of 2007, Maggie Shepard was a crime reporter for the city's now-defunct afternoon paper, the Albuquerque Tribune. She went on a ride-along with the police vice unit and discovered officers had a list of 16 women all arrested for prostitution, and all missing. Shepard was astounded.

"There's a list of people who are missing and I've never heard about this and what's going on?," she said recently.

Shepard says she didn't get the feeling the police were thinking serial killer. And, she says, there wasn't a sense of urgency or concern from the department.

"They weren't trying to make it seem anything other than what it was, a list of missing prostitutes," she said.

Shepard's story ran on the front page of the Tribune along with photos of the 16 missing women. Few other local media outlets picked up the story; nothing happened.

'She Never Came Back'

Two years later, in February 2009, a woman walking on the mesa with her dog found a bone that looked human. Police soon announced the discovery of what some have called the largest crime scene in the city's history.

In all, the skeletons of 11 women and one fetus were found buried in shallow graves on a high mesa west of town. The area had been graded for a housing development and it took a year to identify all the remains. Nine of the victims were on the list of missing women who had been arrested for prostitution; police say they believe the same person or persons were responsible for the killings. But investigators found no evidence to indicate how the women were killed.

"I still remember what my daughter was wearing," said Jayne Perea, whose 15-year-old daughter Jamie's remains were among those found on the mesa. Jamie Barela was not involved in prostitution, and her name wasn't on the list.

"She was wearing blue jeans with high-top shoes and a T-shirt and her curling iron was on, and she said, 'I'll be back, mom, later,' and she never came back."

Perea filed a missing persons report when Jamie disappeared, but she doesn't think that report, or those of the other victims, received enough attention.

"That's what really gets to me is nobody done nothing for these girls at the time," she said. "Maybe if somebody had been out there, our girls wouldn't be missing right now."

This case has raised controversy about whether the missing women were too easily forgotten. Most of the women had histories of drug addiction and prostitution.

Advocates and relatives criticize the media for focusing on their personal histories instead of on the killings themselves. They also criticize the police, who, they say, did little to investigate the women's disappearances until after their bodies were found.

The case has forced some serious soul searching in the community.

State Sen. Sander Rue, a Republican, sponsored legislation that will now require that officers be trained on missing-persons policies. But he there's more to it than just police procedures.

"I think we all need to step back and ask ourselves some questions, as a community how did we respond, [it] raises some interesting questions that we all have to look at," he said.

Albuquerque Police Chief Ray Schultz defends his department's work on the case, and says the investigation is ongoing.

"We've said from the very beginning that this is a 360-degree investigation, which means we are looking in all directions," he said.

The department is offering a $100,000 reward for information leading to the arrest and prosecution of the killer or killers. But that's small comfort for the relatives and friends of 15-year-old Jamie Barela, whose body was the last to be identified.

At her funeral on a windy day earlier this year, each member of her family released a crinkly red cellophane balloon in her memory.

At least six other women went missing around the same time as the West Mesa victims, but their remains were not found in the mass grave. Their missing persons cases remain open and unsolved.