Accessibility links
The Sahlfeld Place Some people swore that the house was haunted. Leopold Sahlfeld, born in 1893, was a young veteran of the First World War. He helped manage a tavern for a short time before legal bars were closed. 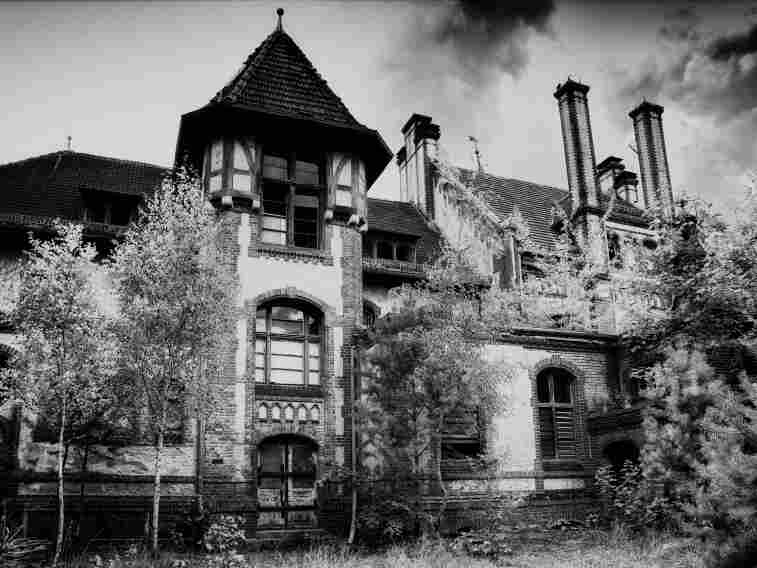 Some people swore that the house was haunted. Leopold Sahlfeld, born in 1893, was a young veteran of the First World War. He helped manage a tavern for a short time before The Noble Experiment closed down legal bars and established speakeasies. During the prohibition, Leopold left the house every day, dressed in business attire, carrying a suitcase and drove to Sioux City. Late in the evening he'd return. No one knew where he worked, but he was spotted occasionally digging in the yard after dark. Word spread that he was performing abortions, the implements in his suitcase and burying the fetuses in secret. Neighbors quit socializing.

Leopold returned to working bars after the prohibition ended. He died in 1945 and his eldest son, Gussie, moved back to take care of his mother, Deborah. Unlike his poor brothers, Gussie skipped military service and the horrors of WWII. However, he had his stateside troubles. During his time in the house he managed to run off five wives, scrapping by, selling insurance for child support. Without a lot of money, the house began to look a little run-down, adding physical debasement to its already suspect aura.

With Gussie's death at age 55 in 1970, Victoria, his youngest daughter by his fourth wife, moved back to take care of her grandmother. Victoria Sahlfeld was an adherent of the counterculture movement and brought with her an assemblage of constantly shifting vagabonds. The mythopoeic ongoings of Victoria's bindle-carrying, hemp-scented, hygienically laissez-faire crowd marred the house; children were told to never go near the Sahlfeld place.

She had three offspring, all boys by who knows how many fathers. The oldest she named Lakeside. The middle child was Sparrow. The youngest son was Powwaw, born during her Native American phase. Nobody knows why Lakeside hung himself in his closet at the tender age of 13, but it was shortly after the death of his great grandmother, Deborah. Sparrow found him and afterward walked around with his hands up around his neck for a good three years. That's when the children in town actually started keeping away.

In 1995, Victoria lost her life, hit by a car while riding her bike back from work at the Palmer Candy factory. The house was left to Sparrow, age 18. His mother was a pagan, but he became Christian. Sparrow formed the Sahlfeld Redeemer Tabernacle. A fundamentalist bible-thumper, he pontificated with enough youthful cocky confidence to draw a small parish. His prominence lasted until the dawn of the Millennium. Sparrow swore it was the end, the rapture was imminent. The congregation defrocked him. After that, rumor spread that Sparrow practiced unholy Satanism. He left town.

So, 21-year-old Powwaw, or simply Pow, took possession of the house, moving back from a rough neighborhood of New York City. In Sioux City, he sold cocaine at truck stops. It wasn't long before he started brewing meth in the shed. Quidnuncs tipped off the police and Pow was promptly sent to prison.

Apparently everyone felt that the very soil was poison and, from the view of the members of the Sahlfeld Redeemer Tabernacle, it was no place for burial. They went in with shovels and hoes and began to dig for the aborted babies. All they dug up were piles of broken glass bottles. The aura changed at the Sahlfeld place with its glittering mounds of multicolored glass. Children began creeping back onto the property and the old rumors began fading. The yard was razed and, honestly, nothing was ever the same again after that.