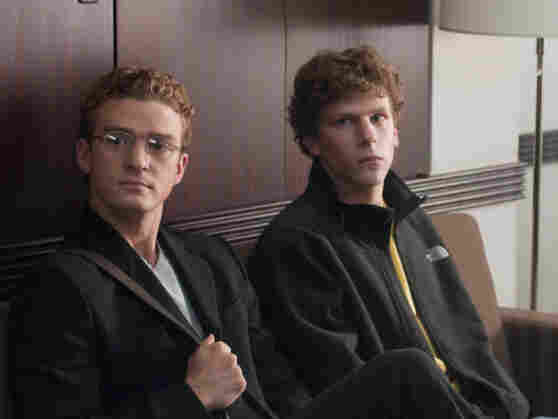 There's been a lot of press over how dark a portrait The Social Network paints of Facebook founder Mark Zuckerberg, but the Zuckerberg in the movie is actually more nuanced than those concerns would suggest. At times, his social awkwardness and outsider status even make him sympathetic. But what hit home most among a group of about half a dozen actual Silicon Valley entrepreneurs who watched the movie with me was how obsessed he was with changing the world.

"The movie captured the energy and intensity of an early stage startup," says Ash Rust, an engineer at Klout, a company that ranks individual influence on Twitter.

"People don't sleep," he says, "but when they do, they dream of a kingdom." And the "kingdom" Rust and others dream about is "connecting the entire world" through their products.

"If I could create a revolution, I'm sure there would be casualties along the way," says Jim Ying, general manager of Six Waves, a social gaming company that uses Facebook as its launch point. Ying shrugged off Zuckerberg's rough edges and the lawsuits his success brought on: "At the end of the day, Mark Zuckerberg has redefined communication for a generation."

It was telling to watch this group react to the scene where two brothers, Cameron and Tyler Winklevoss, go to see then-President of Harvard Lawrence Summers to complain that Zuckerberg broke Harvard rules by stealing their idea. The entrepreneurs cheered as they watched Summers basically tell the brothers to get lost, find some other idea and do the work necessary to make it into something.

Rebecca Hwang, one of the founders of YouNoodle -- a company that uses mathematical formulas to predict the success of startups -- says people are always sharing ideas in Silicon Valley.

"We feel for people like Mark who put in the sweat and the blood to make it happen," she says. (Peter Thiel, one of the early Facebook investors portrayed in the film, is also an investor in YouNoodle.)

Like Zuckerberg, Hwang went to college in Boston; she was at MIT, where she majored in chemical and civil engineering. Zuckerberg's lack of social skills reminded her of many of her former classmates. Of the movie's first scene, where Zuckerberg completely alienates his date, Hwang says, "I knew guys just like that."

But to Hwang and the other engineers in this group, that can happen when you're obsessed with a vision.

"Something happens and it is consuming your life," says Torsten Kolind, also of YouNoodle. "Being an entrepreneur, it is great to see this topic make the big screen." He did find that the movie focused on the drama and the glamour and cut out "the boring parts." But that's Hollywood.

Though I wasn't old enough to really live through the 1960s, I had an older sister who did. What always struck me about that generation was that they, too, talked about changing the world and starting a revolution. But for that generation, "changing the world" seemed to mean joining the Peace Corps or becoming a teacher or a grassroots organizer. Their heroes were artists like John Lennon, civil rights leaders like Martin Luther King Jr., anti-Wall Street activists like Abbie Hoffman or activist journalists like Gloria Steinem. Corporate America -- the home of these startups that now aspire to their own revolutions -- was part of the establishment and part of what needed to be changed, not joined.

That generation was followed by the more conformist Reagan years, where Oliver Stone unwittingly created a hero in his movie Wall Street. Ivan Boesky, whose real remarks inspired the "greed is good" speech by Stone's Gordon Gekko, spurred a whole generation of young people to enter stock trading and the financial sector. The results of that were ... well, we can speculate.

Jim Ying of Six Waves thinks The Social Network is going to be the Wall Street of a new generation.

"It was supposed to be a discouragement," he says, "but I will be curious to see if despite Zuckerberg's dark side, it [The Social Network] inspires people to join startups."

Mark Zuckerberg may have sparked a revolution in the way we communicate, but he is certainly no MLK, no Abbie Hoffman, no Gloria Steinem. Of course he's no Ivan Boesky, either; though Zuckerberg has become a billionaire, money never seems to be what is driving him -- at least in the fictional portrayal central to The Social Network.

Zuckerberg does want to change the world, even if he isn't motivated to bring about world peace. He's a hero for a generation that sees its revolution in social games, better search engines, faster video, cheaper music and mobile computers.

And after a generation of Ivan Boeskys, that may not be such a bad thing.