Accessibility links
Jason Moran And The Bandwagon: Live At The Village Vanguard The piano trio is known to deconstruct standards and assemble its pianist's mixed-media compositions in the same breath. Hear the band, led by its recent MacArthur Genius Grant winner, perform. 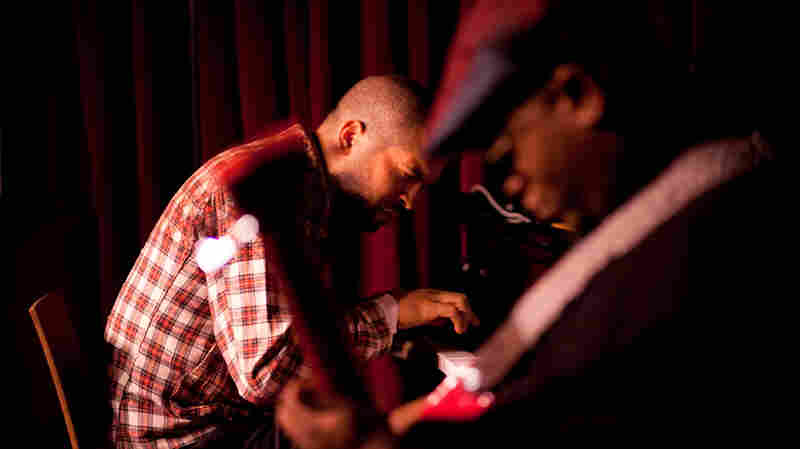 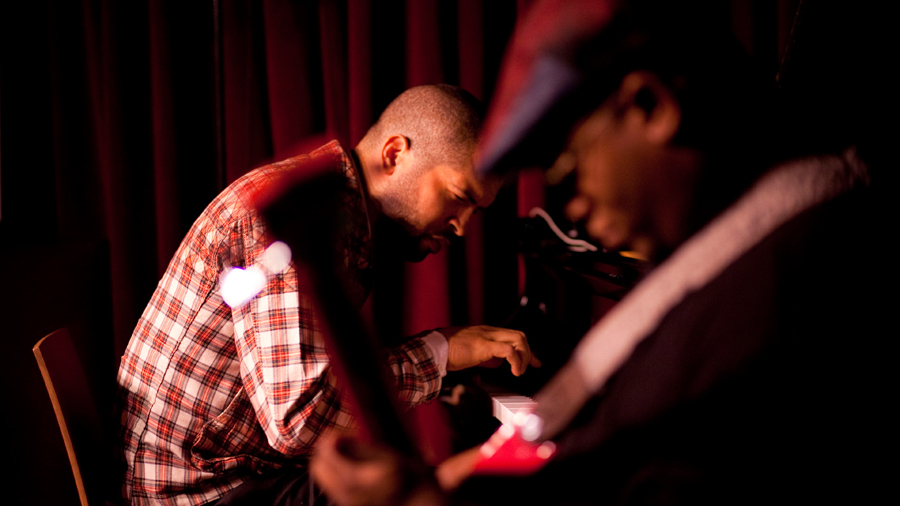 Jason Moran And The BandwagonWBGO

Observers of modern jazz have long known about the unique talents of composer and pianist Jason Moran. This fall, it's come into sharp relief that at age 35, he's already done an awful lot with them. Mostly with The Bandwagon, Moran's trio of 10 years, he has developed a deep repertoire of originals and innovative arrangements. The Bandwagon is behind the new Ten, his eighth album as a leader in 11 years. And, oh, yes: He was just surprised with a MacArthur Genius Grant, an award of $500,000 paid out over five years.

Moran and The Bandwagon continued their 10-year anniversary celebration with a week at the Village Vanguard, a venue which has been important to their development. WBGO and NPR Music teamed up to present a live broadcast, on air and online, on Wednesday, Oct. 6. Hear the archived recording above.

As is common in live performances from The Bandwagon, the set used Moran's minidisc player — the unofficial "fourth member" of the group — to spring song clips and other found sounds for the band to improvise over or respond to. An audio collage preceded opener "Another One," an old Mateen composition. "Feedback Pt. 2" featured Jimi Hendrix's feedback from the Monterey Pop Festival in 1967. A cut-and-spliced field holler acted as a mantra to "Life Live Time." Trombonist Ben Gerstein's remix of songs from Black Stars, an early Moran album, segued into a live group improvisation. Tunes from Ten comprised much of the balance of the set list, including de- and reconstructed interpretations of pieces from Thelonious Monk, Conlon Nancarrow and Jaki Byard.

As a pianist, Moran is a distinctive stylist; he combines free improvisation, early jazz techniques and undercurrents of other contemporary music with more mainstream expressions. As a composer and arranger, Moran is an avid conceptualist, apt to deconstruct a jazz standard or assemble new tunes inspired by modern visual art or sampled sounds. Much of that development has come with The Bandwagon as his base; Tarus Mateen is an active, fluid electric bass player — and occasional vocalist, as demonstrated on "Crepuscule With Nellie" — while Nasheet Waits is a versatile modern-day drum hero.

Jason Moran graduated from the same Houston High School for the Performing and Visual Arts as many a talented jazzman, then matriculated to Manhattan School of Music, where he studied with Jaki Byard, Andrew Hill and Muhal Richard Abrams. While still in college, he was invited into saxophonist Greg Osby's band; a few years later, he started making recordings as a leader. Ten years ago, The Bandwagon made its first recording; though they tour frequently, Moran and his band members also remain busy as sidemen.

Moran first played the Village Vanguard with Greg Osby's band in the late 1990s. As a leader, Moran has been playing with The Bandwagon in the West Village club for nearly all of the group's 10 years; in 2002, the group recorded a live album at the venue. For this run, he said he would feature songs from Ten, and also dig into some of the extensive repertoire he's accumulated.