Accessibility links
Timberlake On 'N Sync, Acting And Bringing Sexy Back Justin Timberlake rocketed to stardom as a teen heartthrob in the band 'N Sync. He has gone on to be a successful solo artist — and expanded his career into both comedic and dramatic roles on-screen. He discusses his long career in showbiz, his SNL digital shorts and his transition to film. 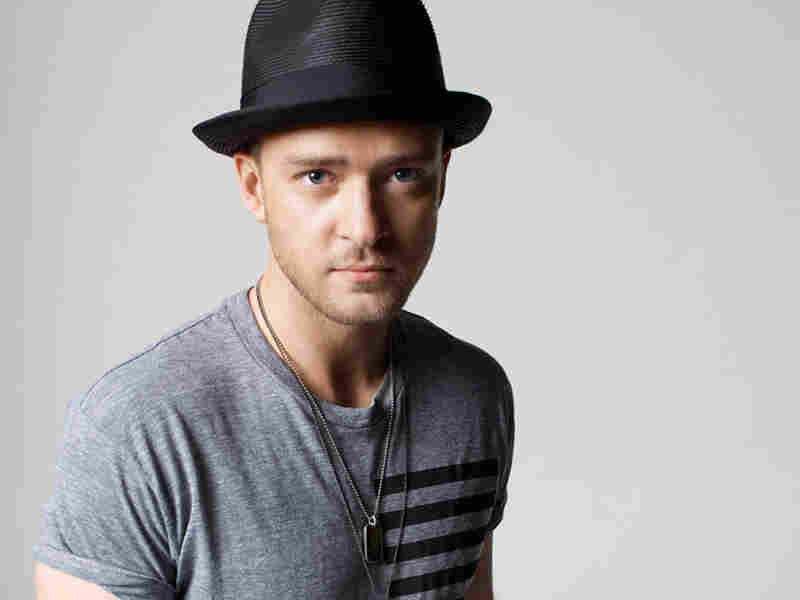 Justin Timberlake's No. 1 singles include "SexyBack," "My Love" and "What Goes Around.../...Comes Around." Peggy Sirota hide caption 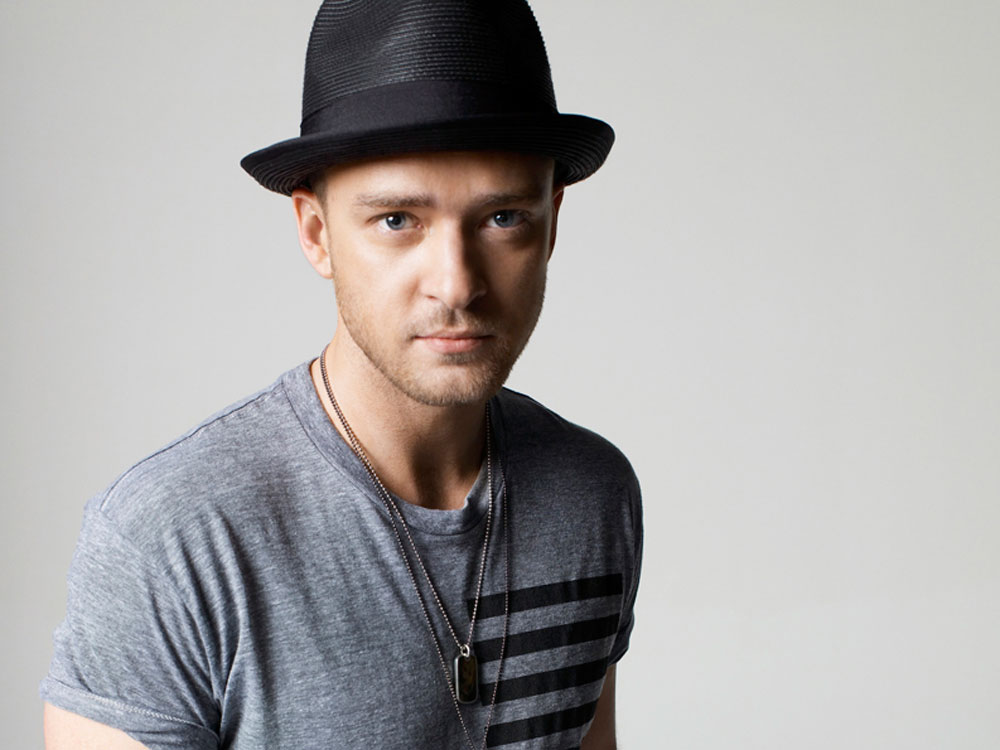 Justin Timberlake's No. 1 singles include "SexyBack," "My Love" and "What Goes Around.../...Comes Around."

Justin Timberlake has come a long way from the first time he stepped on a stage at the age of 8.

"My mother sort of makes this joke that she's surprised that I know what she looks like, because up until I ... first stepped onto a stage, all I did was look down at my feet," Timberlake explains. "As soon as I discovered the stage, it brought out a lot in me that I didn't know I had. And it did it at a very young age, and it was one of the most fun things that I could ever do."

Hear a track from 'Justified' and one from 'FutureSex/LoveSounds'

Cry Me a River

The versatile performer has since proven that he can sing — he has produced several hit solo albums, including Justified and FutureSex/LoveSounds — after leading the 1990s boy band 'N Sync to become the third-highest selling boy band of all time. And he has demonstrated his acting chops, performing in both comedic and dramatic roles.

Several digital shorts from his appearances on Saturday Night Live, including "Dick in a Box" and "Motherlover," have become viral Internet sensations, while his recent performance as Napster founder Sean Parker in David Fincher's The Social Network was lauded by both The New York Times and The New Yorker; in the latter, David Denby wrote that Timberlake's "charm and physical dynamism ... torque the movie even higher."

Timberlake's success on the stage started when he was just 11 years old. He appeared on Star Search, then successfully auditioned for a part on the Disney Channel series The New Mickey Mouse Club alongside future stars Britney Spears, Christina Aguilera and JC Chasez, who would become his bandmate in 'N Sync.

"When you're a kid and things like that happen, and it happens so fast, you can't help but feel like something great was happening for you," he tells Fresh Air's Terry Gross. "But I look back on it and I think it was more of a fluke than anything."

From The New Mickey Mouse Club, Timberlake went to 'N Sync, eventually performing at the Oscars, the World Series, the Super Bowl and the Olympics — and recording with Aerosmith, Michael Jackson, Elton John and Celine Dion, among others. From there he launched a solo career, releasing hits "Rock Your Body," "My Love" and "SexyBack," which became his first No. 1 single on the Billboard Hot 100 and won Best Dance Recording at the 2007 Grammy Awards.

Timberlake tells Terry Gross that he isn't exactly sure where the lyric "I'm bringing sexy back" came from — and that he occasionally regrets writing it that way.

"People feel like it's an extension of who I am, but ... when I get the opportunity to tell them I was playing a character, sometimes they get it and sometimes they don't," he says. "For whatever reason, when we started recording it, I wanted the vocal to almost slap you in the face. I wanted it to sound distorted. ... Originally the song wasn't going to be called that. ... I thought that was too on the nose. [But] the more I played it for people around me, that's what they called it."

Timberlake says that in spite of his achievements — he has earned six Grammys and two Emmys, among other accolades — he still attributes the bulk of his success to his mother, who made sure he was comfortable and aware of his place in the world.

"I remember her saying, 'If you have the ability to do something, one or two things great, it doesn't mean that you're a better person than anyone else.' And I think I've held onto that," he says.

What matters more to him than trophies, he says, are "comments from people who say, 'You've helped me through a rough time,' or [people] saying that you made them laugh or something — that something you did was great, rather than materialistic awards or things like that."

On playing Sean Parker, the founder of Napster

"All of the actors in the film, we didn't know much about any of these guys. We came to these people as characters. Our first introduction to these people was the really layered and well-researched and specific characterization of them by [screenwriter] Aaron Sorkin. I know he had done a lot of research, but there was a book [called The Accidental Billionaires] that was being written by Ben Mezrich at the same time that Aaron was doing his research for the film, and I know that [Ben] did speak to a lot of people. Their only condition was they got to keep their anonymity. So none of us really asked questions about who or what he talked to, or about, with anyone — but he was very adamant about a lot of the research, even details about what they may have been drinking in a certain scene. ... [It] was all accounted for by his research."

"I've always thought that there was humor everywhere. As a kid, I grew up an only child, and nothing made me happier than to make my parents laugh. ... I had a Jackson 5 wig that I would wear around, and I would do the dances from the Jackson 5, and my mother thought that was hysterical. Of course, that seed got planted very early, the physicality of comedy. When I was a kid, I would impersonate anything that I would hear. [That's] why I was able to become a musician and a singer. What I was more talented at, more than anything — because I don't think I'm a great singer — I grew up imitating different voices that I heard, and when I was young my mother used to listen to a lot of a Southern rock station in Memphis, and I grew up imitating all of those voices that I heard when I was young."

On the song "Dick in a Box" from Saturday Night Live

"The weird thing about the digital shorts that I've done with Andy [Samberg] and the Lonely Island guys is that we wrote this song in a delirium of no sleep on a Wednesday or Thursday of the week. We recorded it that night, and we were laughing so hysterically — and probably through the delirium of trying to write something so funny, this came out of it. We knew it would be funny on some level, because we were laughing with each other on the Friday we filmed the video. And then on Saturday they edited it, and Saturday night it was put out on television. ... We weren't parodying anyone in particular. I think the style in which we were doing the song was early-'90s R&B, so when we had that as a basis, we said, 'How ridiculous can we make this?' Because then at that point, it's just about making it as funny as possible."

On The New Mickey Mouse Club

"I got a callback and went to a casting camp, where all the kids who were sort of spawned out of that show, we met for the first time. Britney Spears and Christina Aguilera and Ryan Gosling — there were 21 kids who were whittled down from 20,000 [kids] that they had done auditions with all over the country. Out of those 21 kids, seven of us were picked to be the new part of the cast."

"Everything that we did was based around a cappella harmonies. That's what we wanted to be in the beginning — an a cappella group. So that is why we put five guys in the group. When we were forming the group, there wasn't a boy-band phenomenon. Nirvana and Pearl Jam were probably the top two acts in the world at the time, so we never knew at what capacity everything was going to work out for us. I don't think we thought it was going to be as big as it became.