Accessibility links
Digging For Tunes With Emperor X Musicians are always looking for new ways to put their music out into the world, but few are as literal about it as Chad Matheny. Matheny has started burying his releases in the ground. 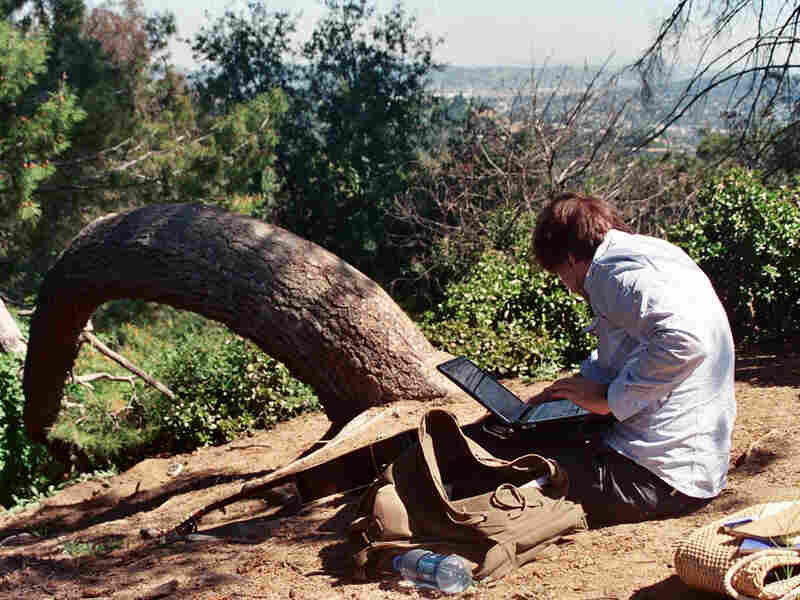 Chad Matheny, who records music as Emperor X, prepares to bury one of his caches at Griffith Park in Los Angeles. Emily Yoshida hide caption 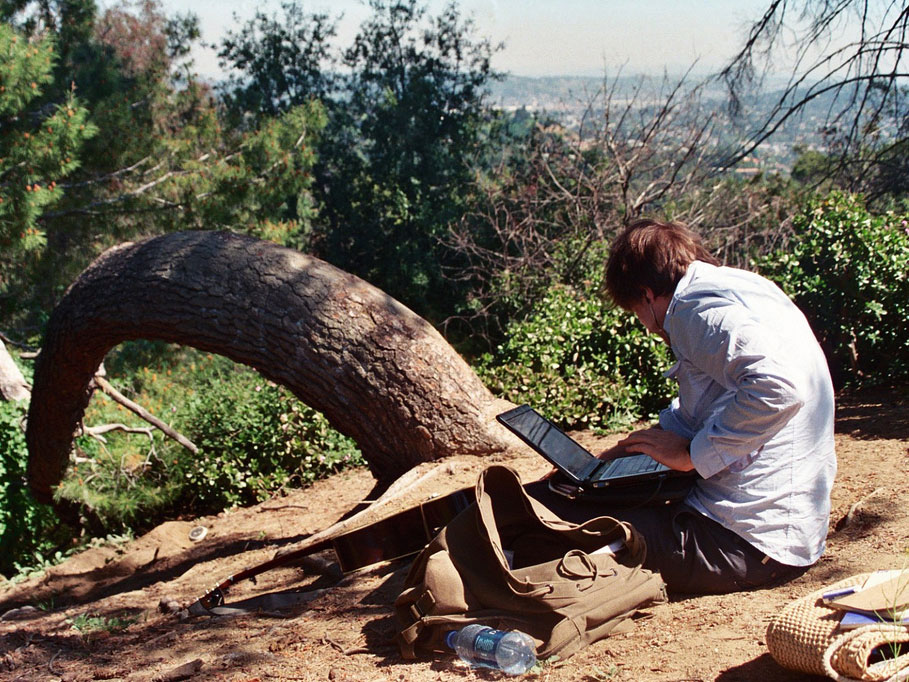 Chad Matheny, who records music as Emperor X, prepares to bury one of his caches at Griffith Park in Los Angeles.

Musicians are always looking for new ways to put their music out into the world, but few are as literal about it as Chad Matheny. The L.A.-based singer-songwriter has been recording albums under the name Emperor X for more than a decade. Now, Matheny has started burying his releases in the ground and asking fans to go out and find them.

Matheny is recording himself on a handheld tape recorder. It's a song that might never be heard again. Two things would prevent you from ever hearing it: The first is that, when he's done, Matheny is going to bury the tape in the ground; the second is that no one may ever find it.

Matheny walks to a rock, drops to his knees and starts scratching at the dirt -- apparently, he hasn't brought a shovel.

"Ha, there it is," he says. "So if someone just casually comes up to the rock, they won't notice anything, but down a half-inch, it's right there."

In a few weeks, Matheny will post the tape's GPS coordinates to his website, and then hope that someone will go dig it up. Whoever finds it gets to keep the tape, which also comes with a secret code that will unlock more music on his website for the rest of the world to hear. He says that these recordings are mostly half-formed song ideas -- it's his music in its earliest stage.

"That's what I'm doing when I bury these things," Matheny says. "I bury the whole creative process and leaving it out there if they want it. People don't usually get to hear that."

Those who do follow Matheny's music career know him better as Emperor X, a one-man band that's been making spacey, lo-fi indie-folk since the late 1990s.

Though he's never made it big, Emperor X has gained a following. He's also caught the attention of critics, among them Chris Dahlen, who writes for the online magazine Pitchfork.

"It would be hard to guess why he's not more successful. He's definitely gotten rave reviews of his albums, he tours really hard and he does a lot to get out there," Dahlen says. "He didn't make it big for the reason millions of really interesting musicians don't make it big. Whatever combination of things, and in spite of his hard work, it just hasn't broken through."

A New Way To Listen

So if you're a musician who's been getting good press for years, but has never been able to graduate from the underground music scene, what do you do? If you're Emperor X, you find a new way of enticing people to hear your music; thus, the whole cassette-tape-burial thing.

Dahlen buys it. He says that, in an age where any kind of music you could ever want is just a mouse-click away, this is the perfect way to recapture the adventure of trying to track down an artist no one has ever heard of.

"He's creating an experience that really fits his music, and what it is is that he's an underground musician," Dahlen says. "Back in the day, there'd always be that artist that you were in love with. You had to find all their albums, but they were really unknown, and you would go to used record store after used record store trying to track them down. And then, finally, you find one of their albums in the bin, and you love it more because of all the effort you put into it. You have a stake in this musician now. And that was the wonderful experience about finding people who are off the mainstream. I think it fits perfectly with what he's doing. I think it's kind of brilliant."

Matheny calls the packages of tapes and computer codes his caches. So far, he's hidden three. When he announced that the first cache had been hidden in Brooklyn, college student Tiel Reardon took the bait. She and a friend headed out to find it, but the GPS coordinates pointed only to an intersection. They spent an hour before figuring out that the cache was hidden in an out-of-service subway station. They headed down, looking for signs that might lead them toward the cache. But it turned out there were signs everywhere.

"There were a lot of different flyers, and we got really confused and fixated on certain signs that we thought were indicating where they were," Reardon says. "There was this one sticker, I think it was on two of the four posts, and we thought somehow it was connected to the project. Turns out it wasn't."

They didn't find the tapes, but Reardon says her adventure wasn't a total loss. After she and her friend gave up, they walked to the top of the stairs.

"And that's when I came back upstairs, and on like the third-to-the-top stop, I found this dirty old $20 bill," she says. "And I was like, at least I came back with something."

No cache, but at least she grabbed some cash.

Later that night, Reardon went to an Emperor X show and told Matheny of her search. He later mailed her the tapes.

Matheny's taking a risk here: When he hides his music, there's a strong chance that no one will ever find it, and the files online will never be heard.

On the other hand, if you're a relatively unknown musician, there's no guarantee that anyone will ever listen to the music that you put out on a CD, either. It kind of makes you wonder if this whole burial thing is kind of a gimmick.

"There's definitely the gimmick aspect to it," Matheny says. "For sure it is. In the same way that, uh -- I can't really think of anything that's quite this gimmicky, actually. ... It's a way of making people interact with it. I think it's fun. Not a gimmick to try and sell more copies of a record. It's a gimmick to try to increase the value of the experience."

In Reardon's case, the value was increased by 20 bucks. But even if you don't stumble over some cash during your search, at least you have a story that you can call your own.

After thinking this over, Matheny says that maybe "gimmick" isn't the right word.

"I think 'game' is better," he says. "I think I'm more comfortable with that word. It has the same connotations of being fun, but without the connotation of trying to trick anyone. 'Cause I'm not. If no one finds these things and no one cares, then, yeah, I'm a litterer. If the risk that I'm running is being a self-aggrandizing litterer, there are worse things I could wind up being. It's not the end-all-be-all of my work, anyway. I'm a musician, primarily. This is just one musician's response to the quickly changing way that people are consuming music."