Accessibility links
Will Electric Cars Work For The Everyday Driver? The first mass-produced electric vehicles ever sold in the United States will begin to hit auto showrooms by the end of the year. The owner of a 15-year-old Honda on its last legs sets out to test-drive the Nissan Leaf and the Chevy Volt. 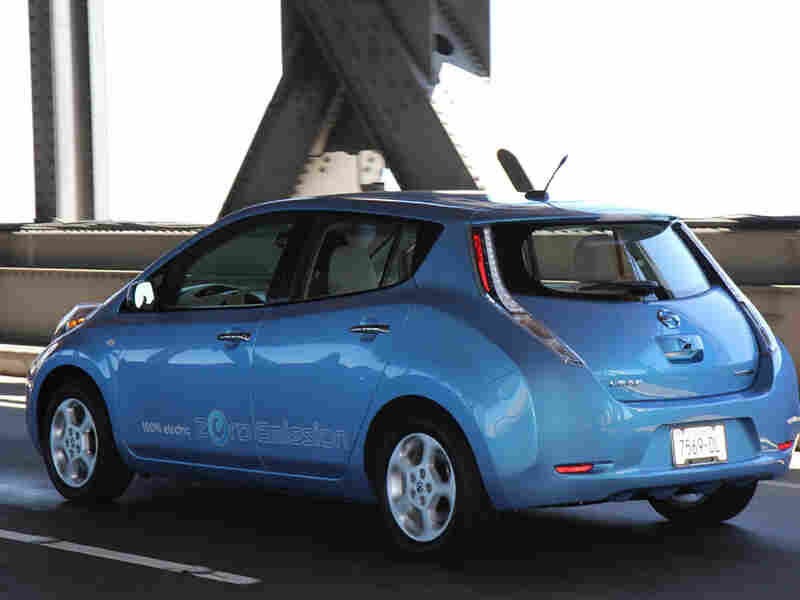 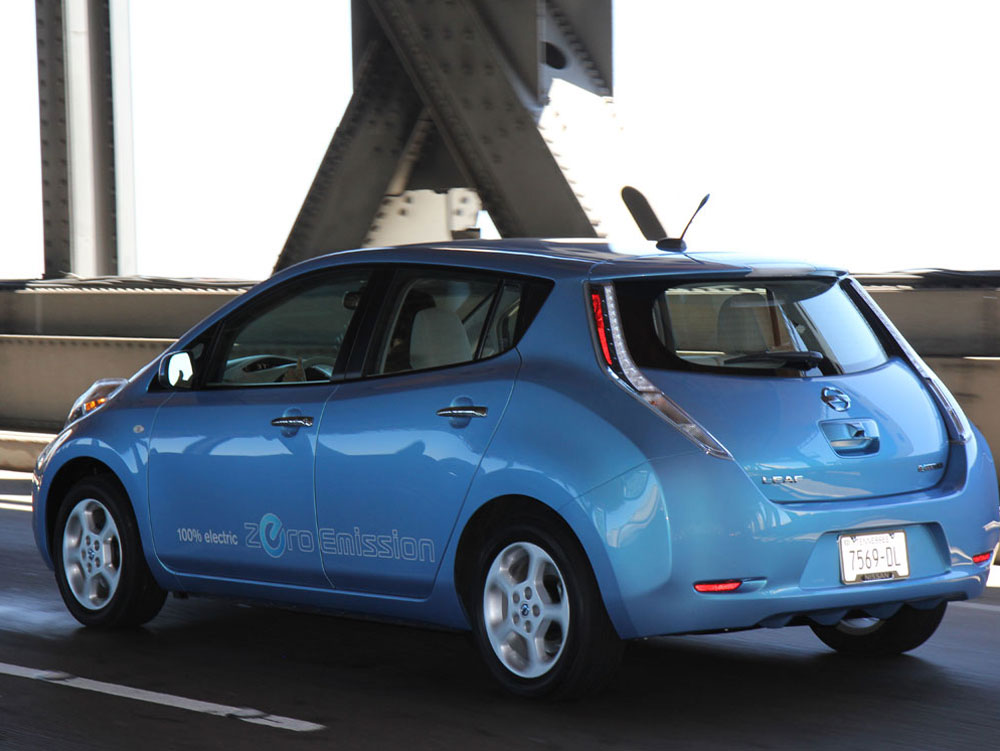 Acceleration: From 0-60 mph in about 10 seconds

Charging Times: It will take up to eight hours for a full charge from a dedicated 220-volt line similar to what people have for their clothing dryers. A full charge in a 110-volt outlet will take 20 hours. The Leaf can also be charged in a forthcoming 500-volt fast-charging dock.

I have never been into cars. I don't know an oil filter from an air filter. But my 15-year-old Honda is on its last legs, and recently I've been curious about alternative fuels.

The first mass-produced electric vehicles ever sold in the United States will begin to hit showrooms by the end of this year. The Nissan Leaf and the Chevy Volt already have tens of thousands of pre-orders.

Until now, electric cars had been the domain of small groups of tech hobbyists and hard-core environmentalists. With electric cars around the corner, my dream of green motoring suddenly seems possible. But how feasible are they for everyday drivers?

I wanted to find out. So, I spent some time behind the wheel of a shiny new, powder blue, all-electric Nissan Leaf — an aerodynamic four-door hatchback with a range of 100 miles.

Paul Hawson, a spokesman for Nissan, joins me for a test drive outside the San Francisco Giants ballpark.

"You are going to want to turn on the car by stepping on the brake," Hawson says.

I'm surprised by how roomy it is inside. I'm almost 5-foot-10, and I often find that I'm not comfortable in small cars.

As Hawson launches into car salesmen speak, I search for the brake.

"It's an accelerator pedal," he says with a laugh. 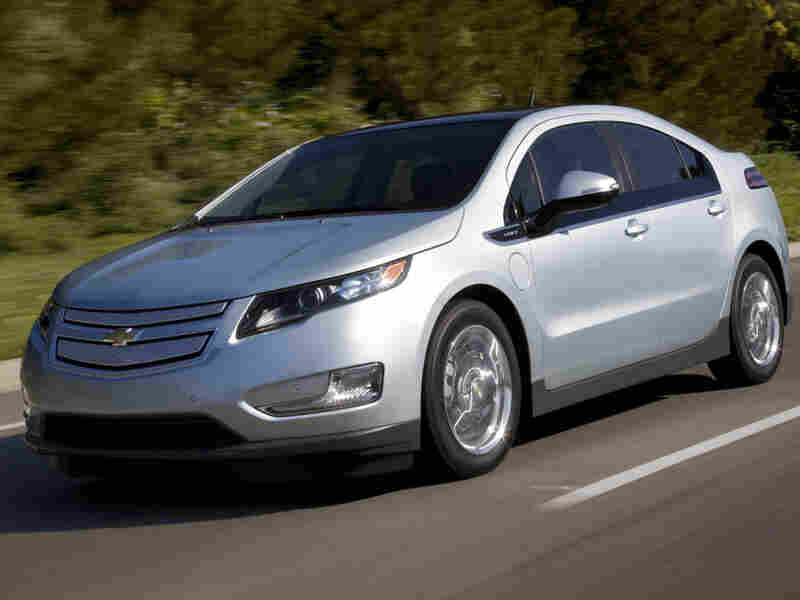 The Chevy Volt is a plug-in hybrid. Drivers can extend their range by tapping into a gas tank. Photo courtesy of GM hide caption 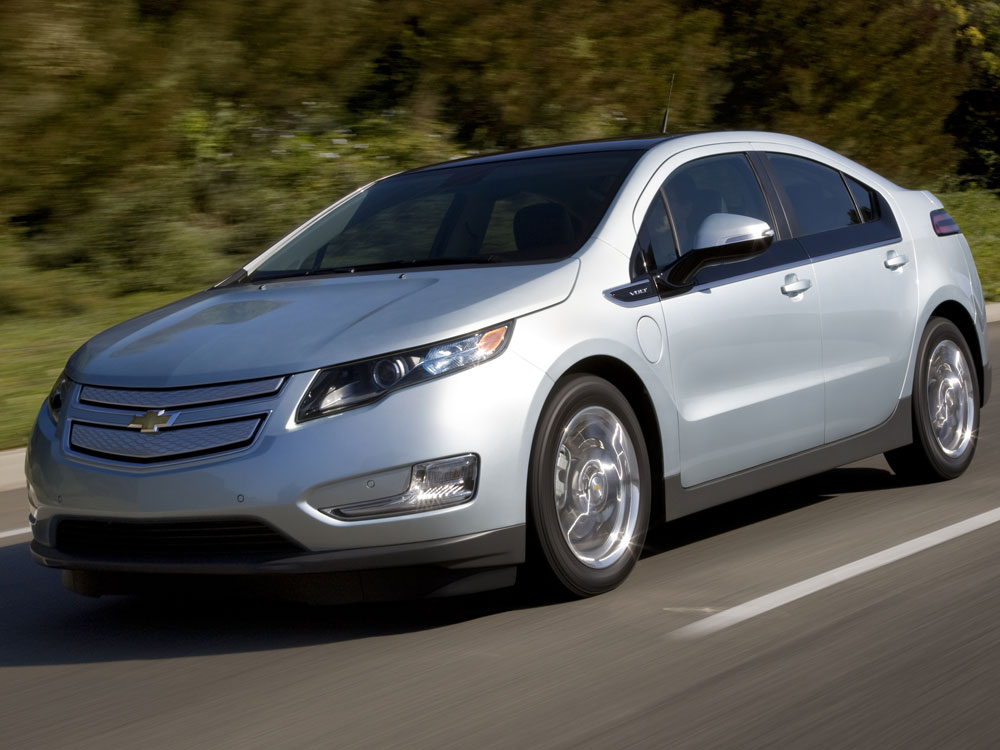 The Chevy Volt is a plug-in hybrid. Drivers can extend their range by tapping into a gas tank.

The dashboard overwhelms me with a confusing array of digital displays. There's some kind of interactive bar graph that I think is supposed to tell me when I'm about to run out of juice. And there's a satellite map of charging stations I can use — not very many of them at this point.

After several attempts, I finally manage to start the car, and much like hybrids, I can't really hear anything.

As we drive up over the Bay Bridge toward Berkeley, I notice a blind spot because of the small back window. Otherwise, I find my excitement building as the car zooms along.

Price: $41,000 retail. Since the car also uses gas, it may not qualify for the federal tax credit in some states.

Acceleration: From 0-60 mph in about 9 seconds

Charging Times: Experts estimate it will take up to three hours for a full charge on a dedicated 220-volt socket.

It goes fast — and without realizing it, I'm already going 72 miles per hour. The top speed is 90 mph, Hawson says.

I could get a ticket in this car.

It's a wild feeling driving without a tailpipe. But there's a downside — instead of a gas tank, which might run an average of 300 miles, there's a big lithium-ion battery pack that sits under the car. One charge only lasts for about 100 miles. I need to figure out how to get around with this kind of limited range.

"You probably need to have a second car that, you know, is a backup that you can utilize," says Karl Brauer, an editor at Edmunds.com.

What, I need to buy two cars? Isn't there something else I can do?

"What people need to do is get better about planning," Brauer says, "and not assume they can just go out and run four different errands, coming back and forth each time."

I'm also going to have to think about how I use my radio, heater and wipers because they can all run a battery down pretty quickly.

Expanded Range With A Plug-In Hybrid

And that's where the competition thinks it has an advantage. GM's new mid-sized Chevy Volt is a new type of hybrid — a plug-in hybrid. It will go 40 miles on pure battery power, but when that juice runs out, it can go another 300 miles on gas power.

GM couldn't make a Volt available for me to test-drive, but at a little more than $33,000 after federal tax credits, the car is probably just too expensive for me.

"I don't believe the Volt is so expensive," says GM spokesman Shad Balch. "I mean, it's an electric car that can be your only car. So, the value that you get out of this car is a pretty good deal."

But Nissan's all-electric Leaf is just $20,000 in California after state and federal tax credits. That's more affordable and would get me one of California's coveted carpool stickers for low-emission vehicles.

But one thing still haunts me: That fancy satellite map on the Nissan Leaf dashboard showed less than a handful of charging stations out there.

I don't want to run out of juice and be stranded by the side of the road. Even driving solo in the diamond HOV lane isn't worth that.

In part two of the series, Andrea Kissack goes in search of a charge.