Accessibility links
In Search Of Charging Stations For Electric Cars The futuristic world of the electric car may finally be here. The first mass-produced electric vehicles for sale in the United States are being released over the next few months, but what's missing are places to charge up. 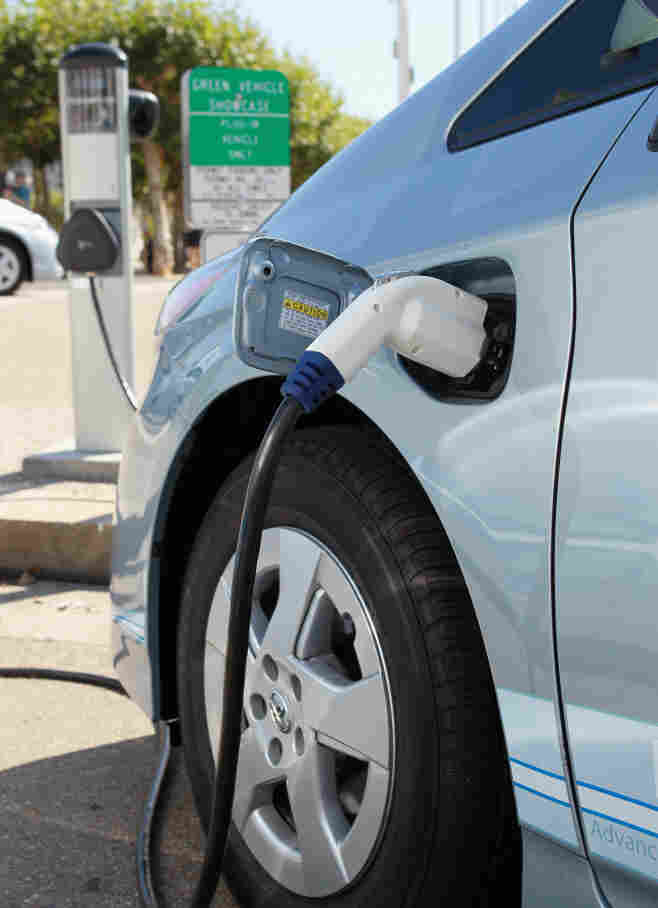 A power cable from a vehicle charging station is seen plugged into the side of a Toyota Prius plug-in hybrid in San Francisco.  Justin Sullivan/Getty Images hide caption 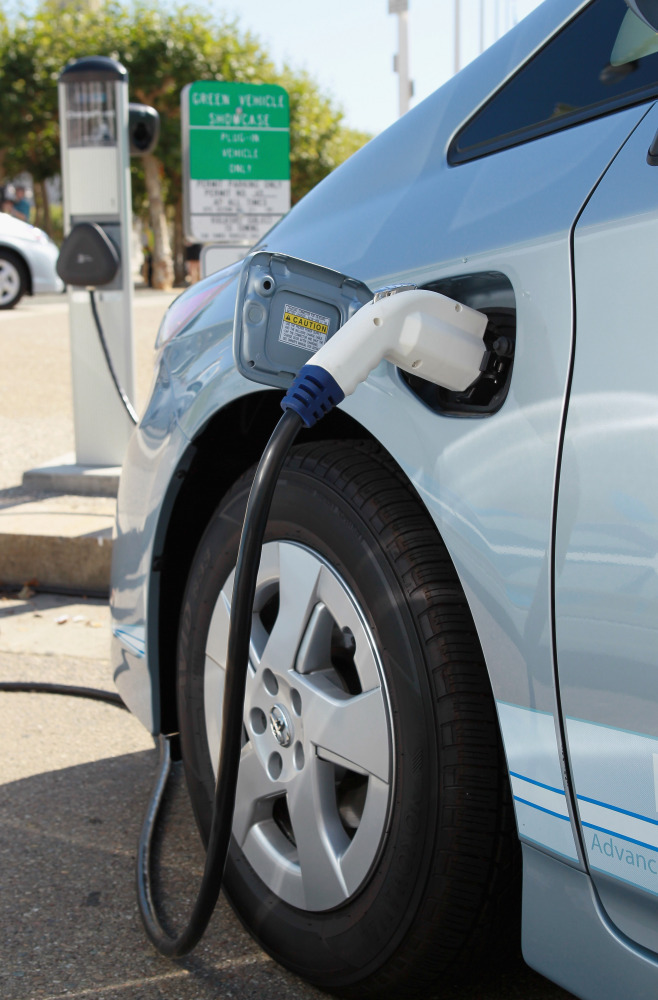 A power cable from a vehicle charging station is seen plugged into the side of a Toyota Prius plug-in hybrid in San Francisco.

Every year, buzzwords enter the American lexicon, like "octomom" or "crowdsourcing." Next year, "range anxiety" may top the list. It's the fear of being stranded in an electric car because the battery has run out.

The futuristic world of the electric car may finally be here. The first mass-produced electric vehicles for sale in the United States are being released over the next few months, but what's missing are places to charge up.

Marty Young, with L.A.-based AeroVironment, is opening the electric panel on the side of my house, so he can work up a price quote for a home charging station.

"The other part of our assessment is the actual loads in the house, and just by looking really at the circuit breakers, you can see that you just have general purpose circuits," he says.

With my old Honda's days numbered, I have been thinking of taking the leap and buying an electric car. Drivers are expected to do most of their charging where they spend the most time, usually at home or at work.

I could plug a car like Nissan's new all-electric Leaf into any socket in my home, but Young says that would take about 20 hours for a full charge. He says a dedicated 220-volt line would be better. That's the kind your clothes dryer runs on.

For about $3, or the price of a gallon of gas, a charging dock will juice up the car every night, or in about 6 to 8 hours, Young says.

Below are some of the companies involved in charging electric plug-in vehicles in the U.S.

Better Place of Palo Alto, Calif., recently raised $350 million in financing from multiple investors and has announced a partnership with GE. Better Place specializes in charging stations as well as technology that allows depleted electric-vehicle batteries to be switched quickly for fresh ones at a network of robotic stations. See a demo.

Los Angeles-based AeroVironment produces charging stations for home, retail, business and public locations. Lance Armstrong just got an AV charging dock for his Nissan Leaf. The automaker is using AV to do home assessments in which an engineer visits your house, considers where best to install the charger, and what electrical work you will need to get done. Usually this means installing a dedicated 220-volt line.

Based near Sacramento, Calif., ClipperCreek is working with electric vehicle maker Tesla Motors and has installed about 3,000 public charging stations since January 2009.

And if I charge overnight, I can get a discounted rate from my utility. I own my house, although I don't have access to a garage. But it turns out I can put a charging dock in my driveway.

It can be safely outside, Young assures me — I won't electrocute myself in the rain.

"No, the great thing about the charging dock is the power is off to this cord until it is plugged into the car and latched in the car, and then the car is communicating with the device to give power to the car," Young says.

This charging dock, which is the size of a large Frisbee, with a cord and pump, would set me back about $2,500 with installation. Federal tax credits would help with that.

But what about charging away from home?

The bad news is there are only a few charging stations around the Bay Area — around the country for that matter. And that's a big problem. There is some hope, though.

Thanks to help from the federal government and local air districts, thousands of car chargers should be installed in homes, apartments and office buildings in the next few years.

Coulomb Technologies near San Jose, Calif., like a number of other companies, is giving away charging stations to businesses and residents to help jump-start the market.

"It's a $37 million program funded in part by a $15 million stimulus grant from the Department of Energy," says Richard Lowenthal, the CEO of Coulomb. "With that program, we'll be rolling out 4,600 free charging stations across the United State in nine different regions."

I caught up with Lowenthal outside the Electric Power Research Institute in Palo Alto, Calif., one of the few places that actually has a charging dock for public use. Lowenthal takes a small, pistol pump out of a sleek-looking charging dock and plugs it into his limited release electric Mini.

"And pretty soon you will hear a clack, and that clack is turning on the vehicle and bringing electricity to the vehicle," Lowenthal says.

Just like a gas station, any electric vehicle can use any charging station. If a driver is not a member of a charging network, Lowenthal says they can just call a toll-free number on the dock and give their credit card number.

Well, we're not there yet — at least not until there are many more charging stations around the country. Bottom line: Production of the EV has jumped ahead of the infrastructure. Still, companies like Coulomb are optimistic, and they have big plans — including one to install "high-speed" chargers that could rev up a car like Nissan's Leaf in less than 30 minutes. Commercial fast chargers will make their debut in major cities in January.

Next, a look at clean-tech entrepreneurs in Silicon Valley who are investing in the emerging electric car industry.