Accessibility links
Rebuilding Haiti, One Sale At A Time Macy's will be showcasing and selling Haitian art in 25 of its stores around the country. It's part of an effort backed by the Clinton Bush Haiti Fund. 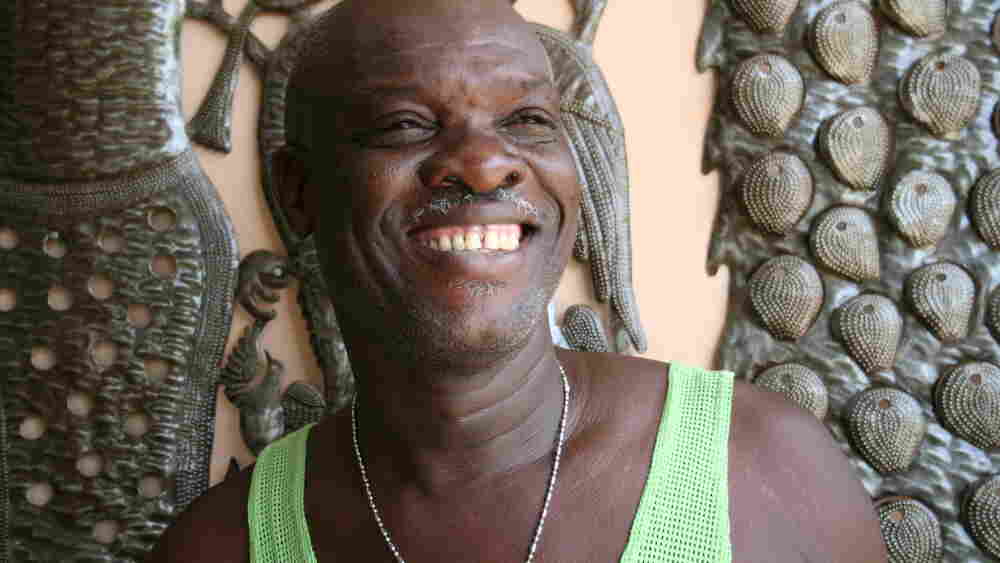 Master metal artist Serge Jolimeau, whose work is featured in the new "Heart of Haiti" collection at Macy's, hails from Croix-des-Bouquets, a Haitian town with a metalworking tradition that goes back to the 1930s Courtesy of Fair Winds Trading hide caption

A new line of handcrafted products made by Haitian artists is the newest addition to the department store Macy's. As Haiti continues its struggle to rebuild from the earthquake, this new collection of home decor is part of an effort to help re-establish Haiti's once-thriving market in art and crafts.

As part of Macy's rollout of the "Heart of Haiti" collection in Miami, a troupe of Haitian dancers swooped and twirled to music provided by singers and drums — not the usual sight in the housewares department. 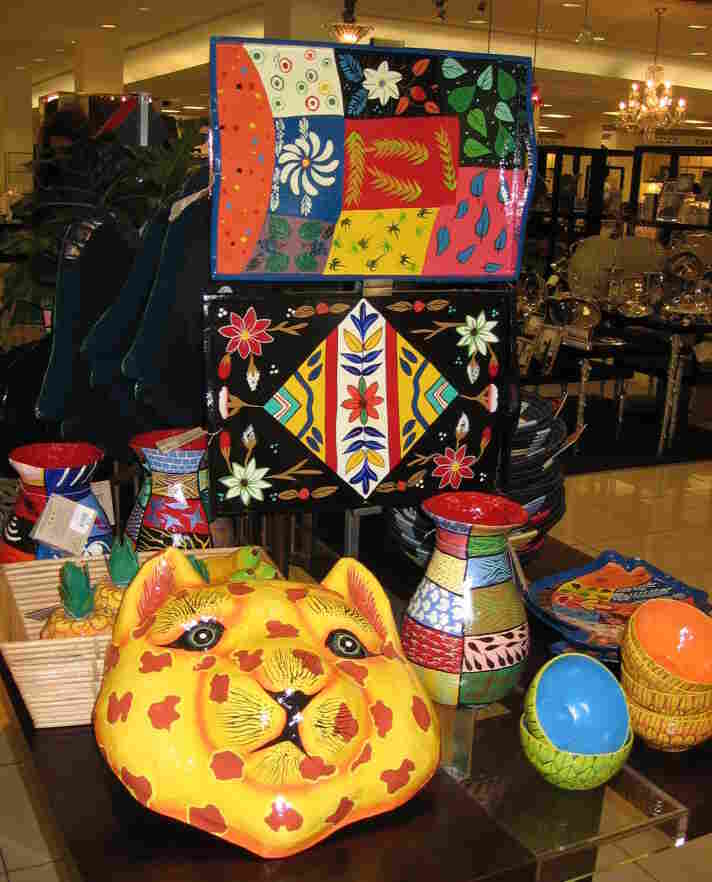 The "Heart of Haiti" collection, as shown in a display at Macy's in Miami, includes colorful trays, vases and other housewares — all created by Haitian artisans. Greg Allen/NPR hide caption

Back To Work, Ready For The Holidays

The Heart of Haiti collection is the result of a collaboration that, along with Macy's, involves groups that work with Haitian artists and the William J. Clinton Foundation.

The products were designed, crafted and delivered over the course of just three months — lightning fast in the world of retailing. With the holidays approaching, timing is everything, says Melissa Goff, Macy's vice president of media relations in the Southeast region.

"Right now is the best time for a product to sell at retail," she says, "because we're going into a heavy gifting period. These are great gifts."

Artist Pascale Faublas helped design and paint papier-mache trays, masks and other items in the collection. She also co-founded an association of artisans in Jacmel, a city on Haiti's southern coast that was hit hard by the earthquake.

"We are working on rebuilding ourselves first. This action for example here today with Macy's is one step in that sense — to get the artisans back to work," Faublas says.

At the end of June, Macy's put in an order for 20,000 products. The company says it hopes to break even or make a small profit from selling the items on its website and at 25 stores across the country.

Macy's did something else unusual in retailing: It paid cash upfront for the collection, which quickly put money into the hands of the artists.

The retailer was helped by two nonprofit organizations, Fair Winds Trading and the BRANDAID Project, which has long worked with Haitian artists. 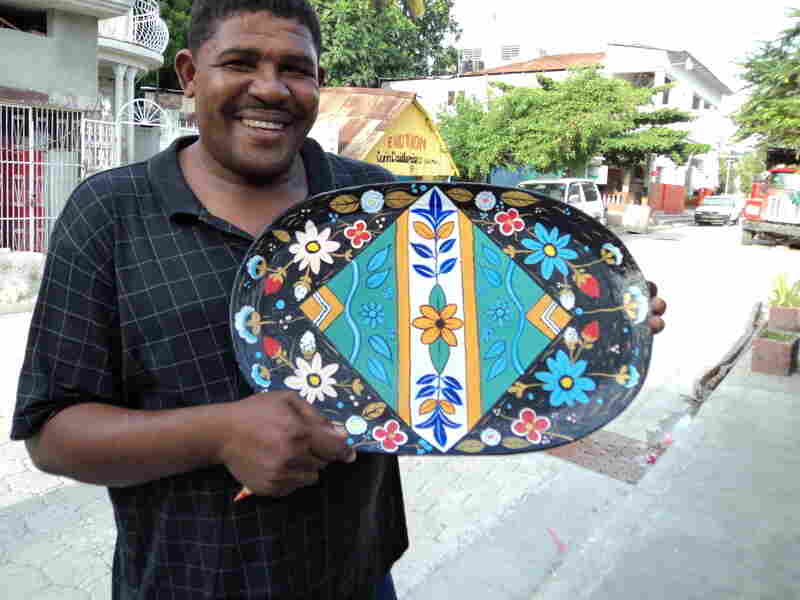 Papier-mache artist Pierre Satyr shows off his colorful tray. Before the earthquake hit Haiti, Satyr had his own workshop in the southern city of Jacmel, where he made masks and figures. Courtesy of Fair Winds Trading hide caption 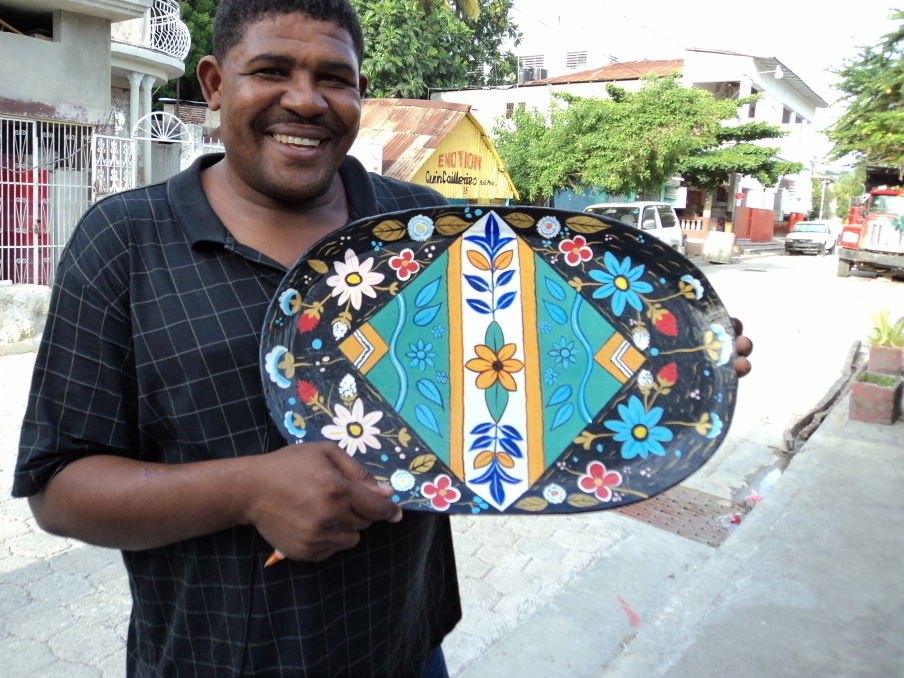 Papier-mache artist Pierre Satyr shows off his colorful tray. Before the earthquake hit Haiti, Satyr had his own workshop in the southern city of Jacmel, where he made masks and figures.

Fair Winds Trading and Macy's already had success with another project. Over the past five years, with help from the nonprofit, Macy's has sold 85,000 baskets handmade by thousands of women in Rwanda.

When the groups approached artists in Haiti, things quickly fell into place.

The Clinton Bush Haiti Fund stepped in with a timely $50,000 grant that rebuilt one of the things artisans like Pierre Satyr badly needed — a place to work.

Satyr is a papier-mache artist. Before the earthquake, he had his own workshop, making masks and figures based on Jacmel's Carnival tradition. With help from Fair Winds Trading's designers, he crafted bowls, trays and masks that would appeal to Macy's customers, using only, he says, "my imagination and my experience also and my savoir faire."

Among the other Haitian artists whose work is featured in the collection is Serge Jolimeau. A star among Haitian artists, Jolimeau is a master metalworker from Croix-des-Bouquets, a town with a metalworking tradition that goes back to the 1930s.

Through an interpreter, he told an audience at Macy's in Miami that his process begins with recycled metal drums that are cleaned, flattened, cut and shaped. The results are filigreed bowls, picture frames and wall hangings that draw on nature and religion, including Voodoo.

"Speaking of Voodoo," Jolimeau told the audience, "whether you like it or not, if you're Haitian, Voodoo is in your blood."

The artists say that if American customers respond, they are hoping to get orders from other U.S. retailers. And they are already working on ideas for a Macy's collection in the spring.