Accessibility links
The World Of Undercover Bedbug Sleuths When commentator Jake Halpern's wife noticed bites on her back, the whole family went deep into undercover-bedbug-sleuth mode, complete with sniffing dogs and pacts of secrecy. Now Jake reflects on his time spent in the underground world of bedbugs and their canine stalkers.

A few weeks ago, my wife wakes me up, early in the morning -- her face stricken with panic -- and announces: We have bedbugs.

"What?" I say. She then shows me the proof: three little bites on her back. I am doubtful. Moments later, however, she is pulling off the sheets of the bed, peering into the crevices of the mattress, searching for any signs on life.

It turns out, a lot of people in the New York metro area have been freaking out because there is -- steady yourself -- something of a bedbug epidemic going on.

If you haven't heard about this, there's a reason: No one likes to talk about it. In a way, bedbugs are like sexually transmitted diseases -- nasty, contagious, and embarrassing. For my wife -- a Polish immigrant who treats dusting under the couch as a moral obligation -- it's even worse than this. The mere presence of bedbugs suggests that she keeps an unclean house. 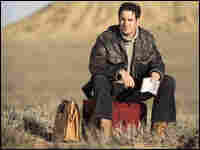 Anyway, we wash everything in the house, but that's not good enough. So we end up paying $400 for a highly trained dog -- a Jack Russell terrier named Bugsy -- to pay us a visit. Bugsy is a graduate of the J&K Canine Academy in High Springs, Fla. -- the Harvard of the canine world -- a place where dogs are trained to find begbugs and mold.

So, as we wait for Bugsy to arrive, the whole family -- me, my wife, and our two toddlers -- maintain a strict policy of silence. Tell absolutely no one, I warn my 3-year-old. At this point, I, too, am in a panic.

"What about your mother?" my wife asks. "We will be visiting her house before Bugsy arrives. Do we tell her about our situation?"

I consider the facts. My mother adores me, but she is also someone who stays at the Four Seasons regularly, and I am not sure how she would handle the prospect of an infestation.

Mums the word, I tell my wife.

So a few days later, Bugsy shows up at the house, with his handler, a guy named Jake Schechter. Jake practically bolts into my front door, as if not wanting to be seen. "Customers don't like me to be seen on their doorstep with Bugsy," says Jake. "I just did a penthouse on the upper east side of New York -- a real fancy place -- they had four cleaning ladies, two nannies and a cook. Of course, I had to sneak Bugsy into the building in a bag so their neighbors wouldn't suspect anything."

This is typical, says Jake. When inspecting offices, for example, he and Bugsy do their work in the middle of the night, and if they find bugs, the removal process also happens in the middle of the night. This way the employees never know. "The thing is," says Jake, "If the employees knew, they wouldn't come to work, and that's no good for business."

In the end, Bugsy didn't find a thing at our house. "You don't have bedbugs," Jake told me. I felt a surge of relief, and yet, the paranoia lingered. I asked Jake if it was possible that he or Bugsy might have inadvertently brought bedbugs into my house. "Don't worry about it buddy," he told me knowingly, "I understand -- I got a wife, too." Jake said that his wife asked him this very question all the time. In fact, she had him inspect their own home -- with Bugsy -- about once a week -- just to make sure.

For a moment, Bugsy -- who was now standing in our foyer -- fidgeted. I tensed. Then he fixed me with a look -- the kind of look that only a dog who charges $400 an hour can give you -- which seemed to say, chill out, my man, the situation is under control.