Accessibility links
RIP Tom Bosley, One Of TV's Great Dads Tom Bosley, who passed away today at the age of 83, was one of TV's truly great dads. Neither a stern guy nor a bumbler, he made TV fatherhood warm, funny, and crucial to the success of an iconic sitcom. 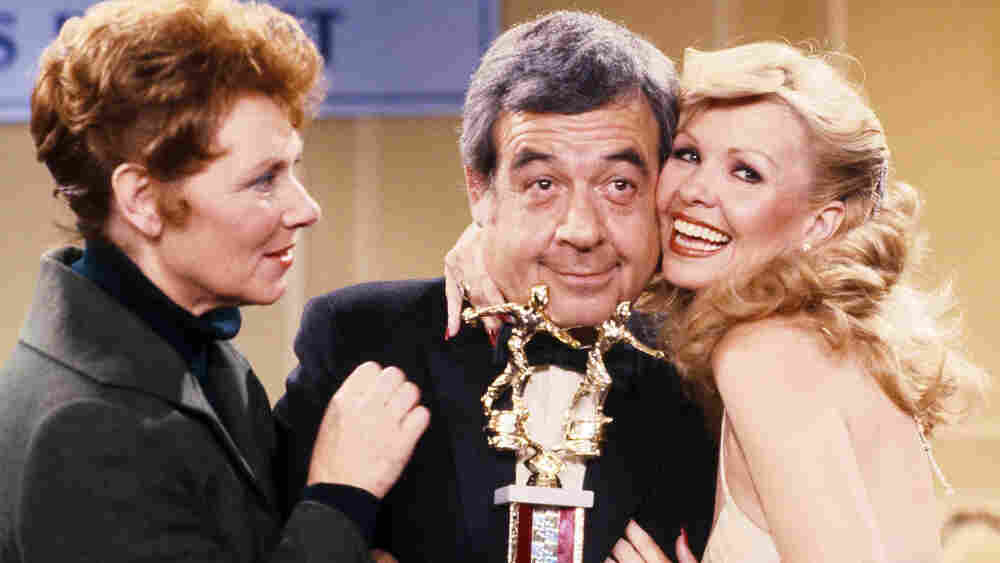 Tom Bosley, who died today at 83, appeared on episodes of Car 54, Where Are You?, Route 66, Dr. Kildare, Ben Casey, Get Smart, Marcus Welby, Bonanza, Bewitched, Mission: Impossible, Maude, and McMillan & Wife. Those were all before Happy Days. After Happy Days, there was a role on Murder She Wrote, and there were episodes of Hotel, The Love Boat, The Drew Carey Show, ER ... even Family Guy. And that's just the TV career, and it's only part of it.

Very often, sitcoms offer fathers who are either loving but slightly remote and intimidating (like Ward Cleaver) or lovable but bumbling (like Tim Taylor on Home Improvement). Happy Days offered up Howard Cunningham, who genuinely fell somewhere in between.

Happily, the TV Academy has a bunch of archived interviews with well-known TV actors, and Bosley sat for hours of questions. In this half-hour segment, he talks about a variety of things, including some of his work on Happy Days.

Howard wasn't a guy who brought a briefcase home and wore a suit; he owned a hardware store. But although he could certainly be silly (the show got no end of jokes from his Leopard Lodge membership and the dream of becoming Grand Poobah), he wasn't a goof. He was a good dad and a good guy, and he loved his kids warmly and with humor.

Bosley walked that line with such wit and energy that he and Marion Ross became one of the few couples of TV parents not to nearly vanish once a TV show becomes about the kids. The Fonzie phenomenon as fans discovered Henry Winkler and his jackets and his thumbs could have relegated the family parts of the story to a footnote, but Happy Days remained a show based at home with the Cunninghams.

In fact, that's exactly why Fonzie moved in upstairs -- it kept everybody together. That's why they built a relationship between him and Howard and Marion. That's why Richie's parents practically adopted him. No matter how much that show was about school and dating and having burgers with friends and pounding the jukebox with your fist to make it start, it was a show about family, and it couldn't get too far from Mom and Dad.

This scene, in which Fonzie faces down the nasty cop who was always trying to run him out of town, is so corny and suffers from logistical hurdles of various kinds (that is a lot of leather jackets to obtain on short notice), but it's also ... kind of great, and it's Bosley's entrance, really, that kicks it up.

There's always some temptation to put disclaimers on a remembrance of a TV actor, as if some apology is in order for thinking fondly of something you spent hundreds of hours enjoying as a kid instead of spending all your time mourning obscure actors appearing in the truly great plays of the world.

I watched a lot of Happy Days as a kid. In fact, there was a time when my bedtime was 8:00 every night, but one night a week -- a night of my choice -- I could stay up until 8:30, and I always used it to stay up for Happy Days. Always. And in recognition of that, I think it's only fair to leave the disclaimer behind and just say: Mr. C, you will be missed.