Accessibility links
Space Tourism: To Infinity And ... Right Back To Earth For a hefty price, spaceflight participants can hitch a brief ride into suborbital space -- 65 miles above Earth -- and make it back in time for lunch. The trips are still years off, but several companies are now taking reservations. 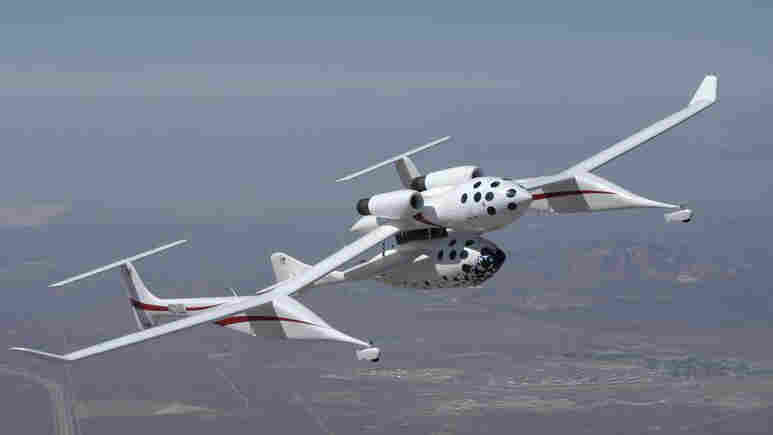 Virgin Galactic is developing a suborbital spacecraft to carry spaceflight participants to about 65 miles above Earth. The craft, SpaceShipOne, is carried high above the Earth by a special plane called The White Knight, then launched. Courtesy of Scaled Composites hide caption

If your idea of the perfect vacation is a ride into space in the morning and some scuba diving in the afternoon, there's good news. A company from the Netherlands says it hopes to offer rides into space from a spaceport in the Netherlands Antilles by 2014.

If this sounds fantastic and impossible, you're right about one adjective and wrong about the other. Space Experience Curacao has signed a memorandum of understanding with XCOR Aerospace to lease a Lynx suborbital spacecraft.

The Lynx takes off from a runway, but its rocket engine can propel it to about 65 miles above the Earth -- what's considered the edge of outer space. When the rocket engine shuts off, the Lynx glides to a landing back at the airport's runway.

XCOR is just one of several companies planning to get into the space tourism business. Armadillo Aerospace is making a vehicle that Space Adventures will sell tickets for, and Virgin Galactic is making its own suborbital craft modeled after Burt Rutan's SpaceShipOne, the first commercial vehicle to carry spaceflight participants into space.

If spaceflight participant sounds like a cumbersome phrase, it has legal importance. Apart from the myriad technical challenges facing the would-be rocketeers, there are also legal hurdles. For example, "passengers" have certain legal rights, whereas Congress has determined that spaceflight participants must sign an informed consent releasing from liability the company that's carrying them into space.

Despite the challenges, it appears likely the first commercial suborbital flights are only a few years away. It won't be cheap; $200,000 seems to be the going rate. But if space tourism takes off, competition could drive down the price.

If a brief suborbital flight isn't enough of a thrill, the company Space Adventures is offering a trip to the moon for $200 million. And the company isn't joking, although it admits that circumlunar trips are a few years off.