Accessibility links
GQ's Gross 'Glee' Photos: The Objections Are Right For The Wrong Reasons The current Glee pictorial in GQ is getting a lot of criticism. While the basis for some of those objections isn't on-target, the general sense that these photos are distasteful and bothersome certainly is.

GQ's Gross 'Glee' Photos: The Objections Are Right For The Wrong Reasons

GQ's Gross 'Glee' Photos: The Objections Are Right For The Wrong Reasons 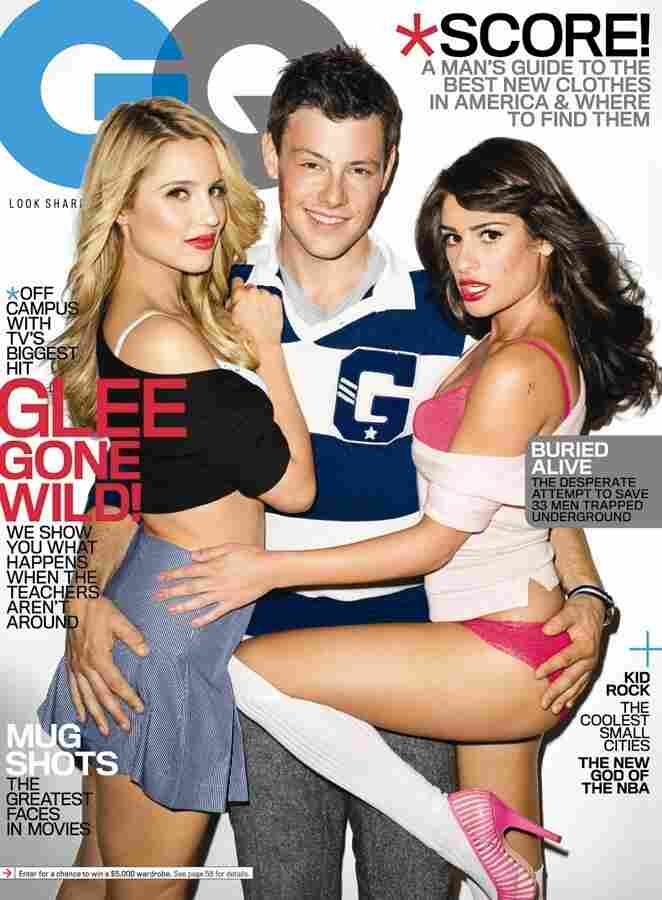 It's no surprise that the Parents Television Council was outraged by a GQ photo spread featuring the actors of Glee (for an issue going on sale October 25). The PTC has been outraged by Glee for a long, long time. The group's objections this time around center around the fact that actresses Lea Michele and Dianna Agron play high school students, which means, it says, that the shoot "borders on pedophilia."

They're wrong about that part. As Time's James Poniewozik has pointed out, Lea Michele is not her character, and neither is Dianna Agron. Provocative sexy photos of adult women don't become photos of children just because those same women play high-school students on television.

Having said that, the GQ pictorial is nevertheless a disheartening, depressing development that deserves to be roundly and loudly condemned.

It's not because the photos are designed to be sexy and there's something wrong with sexy photos -- it's GQ, for crying out loud. Half-naked women are nothing new, and all you have to do is look at a selection of covers to see that much. If Rihanna wants to pose topless and people want to buy pictures of her posing topless, that's really her business and theirs.

But not all sexualized photos are created equal, and these, indeed, are in particularly and specifically poor taste.

It's true that the problems start with the cover. There are plenty of reasons it's bothersome, but let's start with the two major ones: (1) the women are half-naked, while the man (Cory Monteith, who plays Finn) is fully clothed; and (2) Monteith is possessively palming both of their behinds simultaneously. It makes them submissive to him, which they aren't on the show. This is not a dynamic that exists between Finn, Quinn and Rachel; this is a dynamic specifically designed for this shoot. The decision made specifically for this shoot is for them to cling to him eagerly as he casually paws them.

But the biggest problem with the photos doesn't fully come through from just seeing the cover. It doesn't emerge until you look at the rest of the photos that will run inside the magazine. This one, for instance, features Lea Michele in a shirt, underwear, and knee socks -- and sucking on a lollipop. The lolly follows her to this photo, where she spreads her legs as wide as she can while pulling at her hair in a gesture that conveys childishness, if not the sense that she's not quite right in the head. All the crackle she has as a performer is gone. GQ will tell you that her panties are by Calvin Klein, but they won't tell you where she got that blank, unknowing expression that almost suggests she's been caught off-guard in this pose -- just sitting there with her legs spread, playing with her hair, when ... oopsie!

Not a fan of knee socks? How about jumping up and down in lacy anklets and high heels, a look borrowed from little girls playing dress-up?

But that's not why Lea Michele is sucking on a lollipop. "Lollipop" doesn't say "high school." It doesn't say "Rachel Berry." It says "toddler." So do the anklets. That imagery isn't there, I don't think, to suggest literal childhood, but it is there to suggest figurative childhood: someone who's sexy because she's enthusiastic, weak, and pliable -- a mental little girl, more than a literal one.

There's no question that these photos play on the dynamics among characters on the show. But if that's the case, what do these particular photos say? They say, "Sure, these girls are sexy, but you know what would be really sexy? If they were dumber. If they were weaker. If they were more desperate.

If, instead of usually getting over on the guy they've both dated -- who's dumber than they are -- they just clung onto him in their panties while he enjoyed a handful of both of them."

The fact that it's a magazine aimed at men who like pictures of women makes it unsurprising, I guess, that Cory Monteith gets to play the drums while fully clothed, instead of, say, taking off his pants, turning his back to the camera, bending over, and adopting an "oopsie" expression over his shoulder. But ask yourself whether there's any magazine where you'd see that. Would a hot picture of Cory Monteith ever suggest that cocking his head while goggling at the camera wide-eyed like a baffled spaniel was going to be a turn-on?

Agron is obviously feeling stung by the criticism of the photos -- she responded to it on her blog, repeatedly disclaiming them as nothing she's particularly excited about ("not my favorite idea," "these photos do not represent who I am") and then minimizing the importance of her own discomfort ("I'm moving forward," "These aren’t photos I am going to frame and put on my desk, but hey, nor are any of the photos I take for magazines").

Perhaps she can "but hey" her way around her unhappy feelings. And perhaps knowing she didn't really want to pursue this "idea" won't make the photos any less sexy to the people who were going to buy the magazine anyway. But while the photos don't "border on pedophilia," they are nothing for anyone to be proud of, either.