Accessibility links
Ten Things I Learned As A Zombie Beth Accomando spent a day as a zombie -- well, being made up as a zombie for a movie, that is. She shares some of the lessons she learned about fake blood, motivation, and that bored look zombie children get. 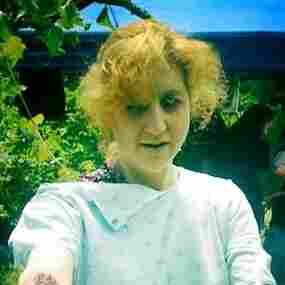 As far back as I can remember, I've always wanted to be a zombie.

So the first thing I did when I got on Facebook was to create a profile that clearly stated that I would love to be undead in someone's movie. And my strategy worked: Some dude named Kevin Perkins sent me a message saying, "If you fly to Baltimore, we'll make you a zombie!" Better yet, I would get to be one of those old school, slow-moving Romero-esque zombies for his short film My Boring Zombie Apocalypse.

"It’s a zombie invasion from the point of view of a 17-year-old who wishes fervently for something exciting to happen in his life," says Perkins.

In the opening words of the film's teen protagonist, David: "I always thought the end of the world would be epic cool."

But it's not. Instead of being scary, the zombies prove to be a nuisance, like rats. They also become something of a carnival attraction, and that's where my zombie role comes in. I was told I could be a "hero" zombie in a fake infomercial advertising a ranch where you can hunt and kill zombies. The infomercial is a tease for the movie, and will then become part of the final product when one of the characters sees it on television.

Most importantly, being a hero zombie meant I'd get the full-blown makeup treatment.

"The shot is a way for our makeup team to show off what they can do," Perkins told me. "In the scene we're shooting, there will be 10 to 20 zombies wandering towards a hunter, and one takes a massive head wound, and that would be you."

Sweet! So I arrived on location at a field in Joppa, Md., where I was joined by a dozen reanimated corpses and about an equal number of live crew members. I was put into the hands of two highly capable makeup artists, Victor Acord and Mark Wenger, who spent hours making me look undead. This entailed whiteout contact lenses, tooth rot (nail polish for your teeth), a deathly and bruised pallor, and massive neck and arm wounds. I couldn't have been happier or more impressed.

Cameraman Bob Rose described my shot like this: "The main two hero zombies are in frame, and then one gets popped in the head [that's me!] and blood sprays all over the one behind it. So we're going to have a zombie standing behind the first one in order to catch all the blood to really sell the head shot." 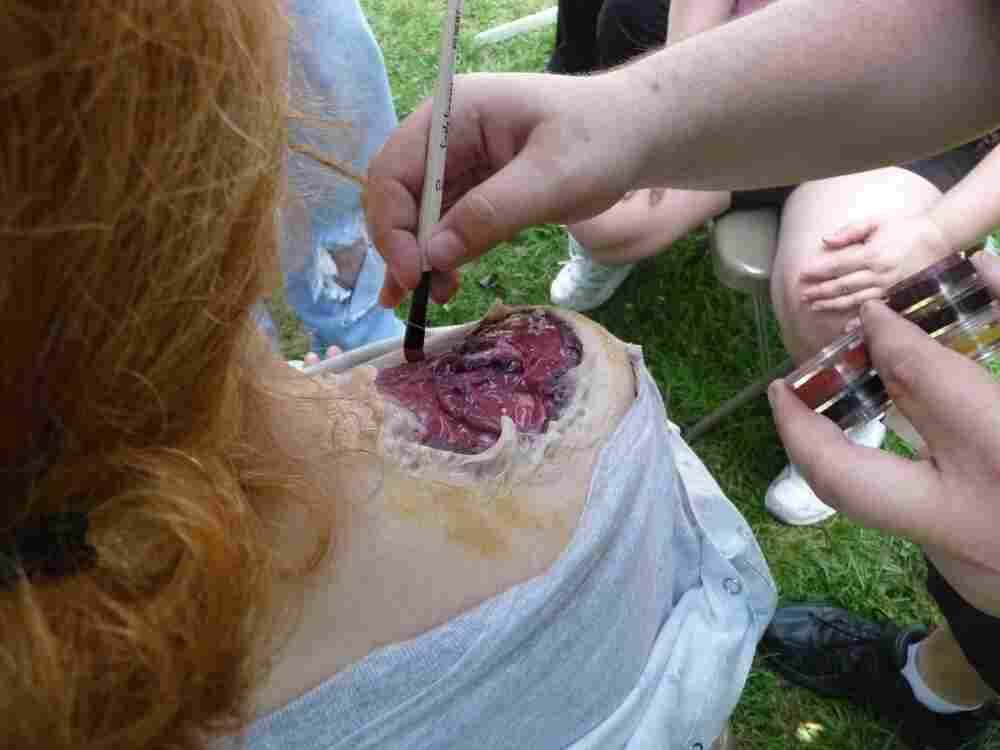 Beth Accomando has a grisly wound applied to her shoulder with makeup. Joseph Perez hide caption

This is what's called a "practical effect." That means it's done live on the set and in camera. Both Rose and Perkins cite John Carpenter's simple, direct style as an influence, so they shoot wide and without a lot of cuts, with as many of the effects as possible done on set. CGI is added only when necessary. For my scene, that meant strapping a device to my back to simulate my brains being blown out, but adding the actual bullet wound to the front of my head as a digital effect later.

So here's what I learned while decomposing on the set.

Lesson number one: The best and fastest way to get that vacant braindead look is those whiteout contact lenses.

Lesson number two: To get the best effect from having your brains blown out, you need to have a big guy in a white shirt strategically placed behind you to catch all the bloody spray. Kind of like a Jackson Pollock painting.

Lesson number three: Zombies need to drink out of a straw. It requires too much manual dexterity to hold a bottle and tip it back into your mouth to drink.

Lesson number four: If you need to make a lot of fake blood, then a trip to the grocery store is in order. Just ask makeup artist Scott Moore: "What we have right here is mouth blood. It's edible blood. It's made of corn syrup, food coloring and cocoa powder to cloud it up a little if you want a zombie to bleed out of the mouth."

Lesson number five: Number five is the corollary to lesson four, which is that you have to be very precise when requesting blood on the set, because it isn't all created equal. In addition to mouth blood, there's fresh scab, thick blood, runny blood, fresh blood, old blood ... you get the idea. Furthermore, blood left out in the sun is no fun to put in your mouth. And wounds -- the fake kind -- get ripe in the sun, which makes the blood too drippy.

Lesson number six (also blood-related because ... well, because there's a lot of blood on a zombie set): Blood is thicker than water. Literally. Or at least fake blood is, so it travels about a second slower, especially when it's, say, weighed down with bits of brain matter and shot out of a pipe with a compressor.

This brings me to lesson number seven: Having a metal pipe (packed with simulated brain matter) duct-taped to your back, and rubber tubing running up your leg, actually helps to make you walk like a zombie -- all awkward and stiff, like rigor mortis is setting in.

Lesson number eight: Zombies do not get sunburned. Apparently makeup -- or rotting flesh -- works like sunblock.

Lesson number nine: Zombie children start to look better and more in character at the end of the day when they are genuinely bored to death.

And the final lesson I learned is that without direction, zombies would just wander aimlessly on the set looking for brains and wondering what their motivation is. Fortunately, director Kevin Perkins has plenty of experience wrangling the living dead. As he said to the shambolic hordes on the set, "We're going to have you literally stay in character the whole way to the camera, and always look at the camera. Imagine the camera is your food source."

Mmmm, brains. Today, on My Boring Zombie Apocalypse's Facebook page, I'll get to see how my zombie debut -- and demise -- looks in the final web video.

Oh, and one last thing. The most used phrase on the set that day: "You got red on you."