Accessibility links
At Cholera Epicenter, Chaos, But Signs Of Control The cases of cholera in Haiti continue to climb, albeit more slowly than they did last week. The Ministry of Health and western aid groups are spreading out across the country preaching a gospel of clean hands, cleaner drinking water and what to do if you get sick. 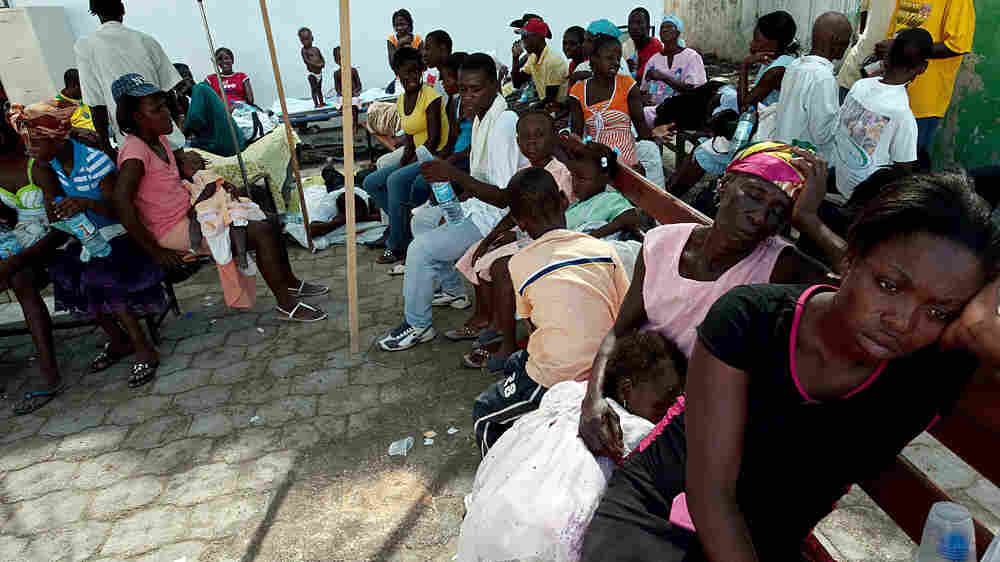 The people of Haiti are holding their collective breath as cases of cholera continue to climb, albeit more slowly than they did last week. The Ministry of Health, along with numerous western aid groups, are spreading out across the country preaching a gospel of clean hands, cleaner drinking water and what to do if you get sick.

At a hospital in the western city of Saint-Marc, the epicenter of the cholera outbreak, doctors say that while their caseload is easing, they are still worried about where cholera will show up next.

The streets of Saint-Marc are a bedlam of cars, motorcycles and people on foot; people selling food and shoes; and kids walking to school. There are shanty towns and canals with sewage, and the streets run with water whenever it rains. It's easy to see how cholera could emerge here.

Hidden behind high walls is St. Nicholas Hospital, where most of the more than 4,000 people with cholera came over the past two weeks. The courtyard still holds the overflow, and colorful sheets of cloth strung over cots protect patients from the sun. Most are elderly or children.

Among them is Philomena Josephat and her father Joseph. He's a bent man in his 80s and has recovered, ready to walk home. 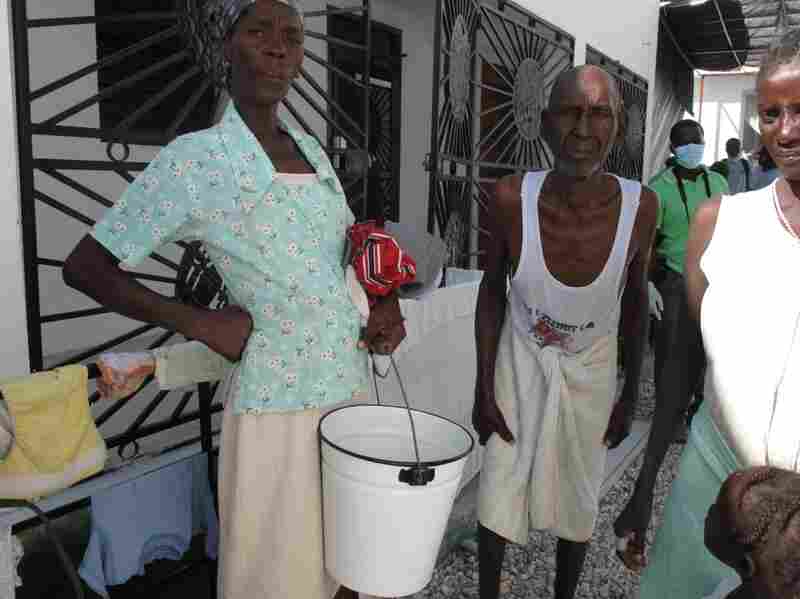 Philomena Josephat and her father Joseph at St. Nicholas Hospital. Joseph, who has recovered from cholera, said: "I've never felt sick like that before, but I lost a child, and since then my health left me. And with this, that's even worse. I felt like I was dying." Carl Thalemaque for NPR hide caption

"I've never felt sick like that before, but I lost a child, and since then my health left me. And with this, that's even worse," he says. "I felt like I was dying."

Josephat is a tall woman with a handsome face that doesn't reveal the things that cholera have visited upon her family.

"I actually lost a sister Friday," she says, explaining that the cholera came on very suddenly. "With my sister, the same day she got, it she died."

A Dispersing Population, A Spreading Disease

People here say the cholera took them by surprise. It's not something they're familiar with. Now that it is here, medical authorities fear that it will stay, and they fear that people with the bacterial infection who are not yet sick will spread it.

That's a fear confirmed by Jerry Benoit, a young man at the hospital for treatment.

"Lots of people left to go down to Port-au-Prince, to the capital city, so that they avoid the area and [don't get] sick," he says. "The population basically spreads wherever the disease has not reached."

The cholera outbreak began in the Artibonite Valley near the coastal city of Saint-Marc. Health experts are now worried that the disease will spread across Haiti.

Doctors here say things are not in control, but are better. Chlorine and fresh water are in good supply, and in town, policemen in the street carry bottles of hand-sanitizer and offer them to drivers stuck in traffic.

But Dr. Patrick Almazor says it's no longer just a problem in this northwestern city -- it's where people -- and the bacteria -- go next. Almazor works for Partners in Health, a medical aid group that helps run St. Nicholas and two other hospitals in the region. He says the crowded capital of Port-au-Prince, just 40 miles to the south, is a sitting target.

"This is a big risk to get this epidemic spread, but our projection -- we thought after four days we might have a lot of cases in Port-au-Prince -- but we can say we are lucky and the message was spread and people taking better measures," he says.

Bracing For Outbreaks Across The Country

That's lucky so far, but epidemiologists from the Pan American Health Organization say they wouldn't be surprised if there are more outbreaks around the country. Port-au-Prince is in full preparation mode -- radio programs and even pickup trucks with loudspeakers are spreading the hygiene word.

But the bacteria could be spreading in other directions. In the northern town of Villard, a Christian aid group called Samaritan's Purse set up a cholera clinic there five days ago.

Justin Dennery, a registered nurse who came to Villard to help with the January earthquake, is now treating patients with simple rehydration and antibiotics to take the pressure off overwhelmed hospitals. And over five days, the number of new patients has dropped swiftly.

"If the numbers continue to decrease, we are going to follow the wave, depending on what area it's going in," Dennery says. "Right now we have a team that's trying to track where the majority of the cases are so we can set up another site."

But like other medical workers here, he's by no means sanguine. Now that cholera is here, it could crop up again, so long as public sanitation and water supplies remain as sketchy as they are. That's why most health experts say the ultimate cure for a disease like cholera in Haiti is money and education.